A Voice Director on Why Actors Should Sing 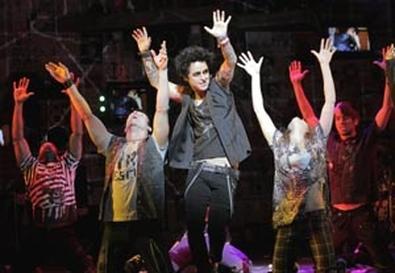 When it comes to the voice, David Coury undeniably has one. Though he's being interviewed over the phone, this New York–based interviewer has the feeling that if he were to lean out his window, he could hear Coury speaking all the way from Los Angeles, where he's voice director for the Howard Fine Acting Studio.

At Howard Fine—not the only outlet for Coury's wares; he often coaches privately, one-on-one—he teaches a course called Singing for Actors, which isn't limited to raising the voice in song. In his persuasive, insistent tone, he says of the course, which he offers at several levels for five-week terms, " 'Singing' could mean anything. My version of it, going on 10 years now, is a vocal empowerment program. It's based in the area of singing, speech, communication, and personalization. Where I've been successful is how they apply directly to the actor bringing a text to life: How does a voice make it better? How does it make a script sing, make a moment sing? I'm using singing as a metaphor. It has larger meaning."

But he's also using it in the conventional sense. He declares, "The most comprehensive way to get a speaking voice in shape is through singing." That's part of the reason he's known for working with actors who have never sung and suddenly need or want to, despite perhaps believing they can't sing, can't carry a tune, can't hit a note on pitch.

Says Coury, "I've met so many actors who've said, 'If I only sang. I'm afraid of it. I've been told I'm tone-deaf.' But in 20 years, I've never met an actor who said they were tone-deaf who actually was tone-deaf. When I give a class, I ask how many think they're tone-deaf. Many hands go up. Then I ask how many actors, when they open their mouth, the worst sound they ever heard comes out. I ask more questions, and that narrows them down. When only one hand goes up, that's who I get to come up to the stage. Within seconds—not even a minute—I have the person hitting a note right on key."

Letting Go of the Fear

How does Coury do it? How does he get them to "let go of the fear"? First, he tackles the "misconceptions," he says. "I have them focus. It's important that they touch me, hold my hand—the connection not being just a slogan on a refrigerator magnet at Barnes & Noble. When they feel that with me, all of my laserlike attention on them, they forget the other things they're scared about, the performing, how they're about to sound.

"Sound is ultimately not the goal. A good voice for me is one that is heard. A lot of the other stuff falls away. I squeeze hard. They squeeze hard. I start. I hit one note. They hit the note, right on key. The audience goes crazy. What does that do for the person? It's something you swore you would never do. You're doing it. You were told at school, in church, 'Don't sing; mime the words.' It's positively epidemic in this country."

Then, Coury says, "I exercise and get them in touch with their voice—the one you sing with and the one you speak with and, most importantly, the one that lives deep inside you, the one that's been buried for years." And although he's teaching classes of perhaps 20, he maintains that he works with the students one by one.

A while ago, one of those worst-sound-making class members was Sara Gilbert, though Coury is reluctant to name other notable performers with whom he has worked. Pressed, he mentions Roger Bart and Carla Gugino. On the Howard Fine Acting Studio website, the names Leona Lewis (apparently sent Coury's way by Simon Cowell and record exec Clive Davis) and Geri Halliwell (of the Spice Girls) appear, as well as references to advice taken by Barry Manilow, Patti LaBelle, Kiss' Gene Simmons, and Mary Wilson of the Supremes.

The story behind Coury's becoming a vocal coach and teacher is amusingly checkered and involves him as both a Little League player at 8 and an accordion player. "It was confusing to all except to me," he says. "I was a natural, and I understood at a young age what it was to do something that wasn't popular. That tenacity and passion made me who I am." He was also the only fifth-grader not welcomed into the glee club, which rendered him determined to teach himself. "I never liked the sound of 'no,' so I willed myself to sing better."

He performed in high school musicals, and at Rhode Island College he was, he says, "the go-to guy on campus to give you a really good audition." After graduation, he acted professionally, but when it came down to another actor and him for a role in the original New York cast of "Les Misérables" and he didn't prevail, Coury decided that coaching would be his priority. He says, "I didn't feel like someone who wanted to audition and then audition for another part and then for another part. I chose to remain in Los Angeles. I became that mentor."

As mentor, he now proclaims, "My Singing for Actors program is championing the authentic self. Only when you know who you really are—and that has tremendous vocal ramifications—can you then tap into that person, that am-ness."