Slaughterhouse Five, or the Children's Crusade 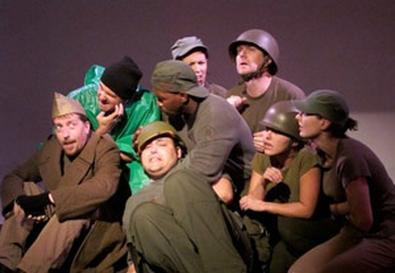 Billy Pilgrim (Don Schlossman), the semi-autobiographical hero of Kurt Vonnegut's novel and the present adaptation by Eric Simonson, undergoes a daunting array of experiences. He's inducted into the army in World War II, sent to Germany, captured by the Nazis, sent briefly to a German POW camp for English troops, and eventually shipped to Dresden to serve as slave labor in a meat-packing plant. There he experiences the Dresden firebombing but manages to survive. After the war, he marries, has a daughter, and goes to the planet of the Tralfamadorians—or is that merely a fantasy?) who believe that past, present, and future are simultaneous and eternal. He searches for mysterious novelist Kilgore Trout (Brian Helm), sires a child with the oddly named movie star Montana Wildhack (Lily Vonnegut, the novelist's daughter), and so on.

This is a lot to cram into a single play, but Simonson does it—though there are signs of strain. And there are further complications, because as the script tells us, "Billy Pilgrim has come unstuck from time." So the chronology is fractured and events are shuffled, requiring three actors to play Billy at various times in his life. In addition to Schlossman, A.J. Diamond plays young Billy, and Owen Sholar is the boy Billy. Thus the unifying principle of Vonnegut's novel—it's filtered through a single consciousness—is diluted. And the constant shifts of focus tend to dissipate dramatic momentum.

Director Tiger Reel has given the piece an energetic staging, but there's so much plot—not to mention Vonnegut's philosophical and metaphysical speculations—that anyone not already well-versed in the original novel might find it hard to grasp. A few verbal gems stick in the mind: "All wars are children's crusades" is there to remind us that wars are masterminded by old men, while the young provide the cannon fodder.

The fast pace and ever-shifting focus make it hard to judge the acting. Schlossman's Billy packs plenty of conviction, but we keep losing track of him. And the rest of the able and hardworking cast seems similarly handicapped by the relentlessly busy action. This is an ambitious project, but it's only partially successful.