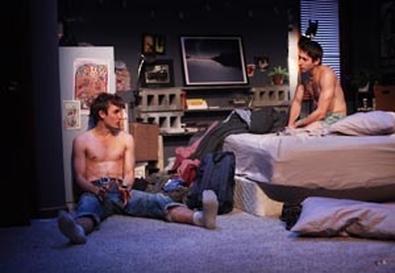 Photo Source: Paula Court
Plays about dysfunctional families, abusive relationships, or gay youths dealing with their emerging sexuality are rampant, not to mention all those indie films and TV dramas. How do you reinvent such subject matter? Well, in the words of Stephen Sondheim, "Anything you do/Let it come from you/Then it will be new." And that is exactly what Daniel Talbott has done in the well-observed and wise "Slipping."

Set in a suburb of Des Moines in 2006 and also earlier in San Francisco, "Slipping" slips nimbly back and forth in time to follow the emotional trajectory of 17-year-old Eli, who is experiencing a critical mass of psychological damage. The boy's problems include the recent suicide of his beloved father; a troubled, distant relationship with his workaholic mother; a forced relocation from hip Frisco to the vast, unwashed Midwest; an abusive first-time Frisco affair with a closeted, self-hating jock; and a possible Iowa duplication of that affair with another closeted jock. The smart but sensitive Eli can't handle it all and copes by emotional shutdown, turning everything inward at great risk to himself.

None of this is new, yet all of it is compelling due to the specificity of character and emotional complexity of Talbott's script. The bifurcated structure helps enormously; we are only given pieces of the puzzle and must work to put them together. What is particularly gratifying is that when that puzzle fills in, it doesn't feel in any way pat or reductive, just true.

Kirsten Kelly's sharply focused direction guides us confidently, and she even manages to make a virtue out of a debit. "Slipping" is a bit hemmed in by the tiny Rattlestick space; it needs the ability to move away from Eli's suburban bedroom, however nicely realized by designer Lauren Helpern. With no place for that bed and room to go, Kelly is forced to rely on her actors to move set pieces to change locales. They do this resolutely in character, so much so that the scene changes actually tell us more about them, keeping the action hurtling forward when it all too easily could have halted.

The four-person cast is ideal. Adam Driver is scary and heartbreaking as the Frisco jock, who will eventually marry and create his own damaged family. MacLeod Andrews makes the Iowa athlete's journey of self-discovery authentic and surprising. Meg Gibson excels at registering Eli's mother's confusion at her conflicting feelings regarding her son. Best of all is Seth Numrich's troubled teenager. Numrich's emotional transparency provides us intimate access to Eli, and he also convincingly captures the boy's restless physicality. Finally, his subtle differentiation between the 15-year-old and the 17-year-old is extremely effective.

One of the hallmarks of this production is its pitch-perfect use of pop music to underline and reinforce character. Talbott's stage directions specify many of these choices, and Kelly orchestrates them beautifully. They make a great team. All I can say is, "Give us more to see."