'Smash' Recap: Episode 5, 'The Read Through' 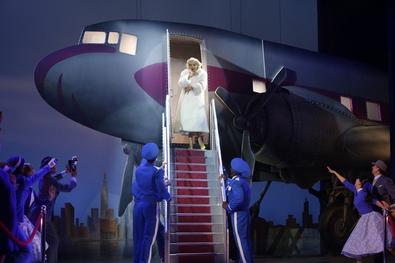 Welcome to "The Read Through" where there will be--you guessed it--a read-through of "Bombshell." And just to spice things up, there's a simultaneous reading of "Hit List," too! You can hardly stand the excitement, we know.

This week, we catch up with Tom, Derek, Julia, and Peter as they visit the STUNNING Belasco Theater, where Bombshell is apparently now going to be staged. Tom has tons of ideas for new numbers, Derek is droll, and Julia and Peter are all pumped up about the new draft and "we, we wee-ing" all over the place like an actual couple. Gross. Derek is going to burst their peppy bubble by reminding them that Jerry will flush "Bombshell" down the toilet if the reading isn't perfect.

Continuing to hedge his bets, Derek has gotten "Hit List" into something called "The Winter Fringe," so Karen, knee-deep in crush-on-the-badboy mode decides to pull together a last-minute, first-ever reading for the show at Kyle and Jimmy's apartment.

Meanwhile back in reality, Eileen's life is kind of falling apart. (No worries, though, not a single hair on her bluntly-cut head is out of place. Ever.) And in another studio downtown, Ivy Lynn is suffering the slings and arrows of outrageously bad co-stars in "Liasons" rehearsals.

By the end of things, we've still heard nary a word of the new "Bombshell" book – so we have to pretend to trust the writers of "Smash" that it's amazing – and its fate is still up in the air anyway. And "Hit List" is a disastrous pile of crap that Jimmy is going to salvage by making it entirely through-sung. Because that has never gone wrong before…

Greenpoint is Far Away, Yo!
You know that moment where Andy is shocked everyone is willing to go out to Greenpoint for their reading? Real life, yo. Some of us have lived in Manhattan for more than a decade and never set foot in Greenpoint. We were shocked, too.

Eileen Rand's Entire Existence
Eileen Rand continues to be the only person with relatable, real-life problems on this whole television series. She's got money problems and legal problems, and her boyfriend just dumped her. We love you and your 99 problems so much we kind of just wish this whole show was about you.

Jerry Attempts to Nuke the New "Bombshell"
We're probably supposed to be all upset because Jerry is refusing to produce "Bombshell" in its smart, incisive new iteration and instead wants the dumbed down old version. But having seen "Spider-Man," "Leap of Faith," and "Chaplin" – to name but a few – we're pretty sure this is a very accurate representation of what real meetings with theater producers look like. Besides. We're tired of talking about whether or not Julia can write.

The Two-Dimensional Airplane
Look. We know you're trying to sell us on Tom's big, fun, flashy directorial genius here, but there are some problems. And it's not just the fact that "Miss Saigon" beat you to the aircraft-on-stage thing, or Nixon in China did the actual plane art better. No, what's truly awful here is that even the set of "Catch Me If You Can" – made out of popsicles sticks and the kind of school glue five-year-olds dig out of a tub with a stick – was a zillion times better than this.

In Which Marilyn Continues to Make No Sense
"Public Relations," this week's new song about how Marilyn likes to dally with men and see the sordid stories in print, would probably seem a lot better if "Smash" hadn't just spent the last three episodes telling us that Marilyn was having that sex-kitten image thrust upon her completely against her will.

The Mystery of Karen Walker
Halfway through the episode "The Roommate," Ana gives it to Jimmy all real-sauce and tells him to keep it professional with Karen. Why? Well, because she's a "really special person." This would totally make sense if we'd seen her do anything more special than mouth-breathing and incorporating fishtail braids into several different hairstyles. At what point will we actually see Karen be special instead of just being told she's being special?

Let's Trod Out the "Rent" References Again
Look, we get it. You think no one in middle America can identify a single modern, musical that was written post-"Rent." But must that be the musical you reference six times a week? So much time is spent being slavish to meaningless details of the Broadway Universe – like anyone in middle America knows or cares if you have the real Jordan Roth on your show – but you can't find some way to talk about theater as a living, breathing art form that has had many more significant shows in the 17 years since "Rent"?

1,001 Tom Levitts
Again this week we're having "Tom is going to be a director" symbolism shoved down our throats. This time in the form of a new musical number he's imagining for the show, wherein he plays all the characters besides Marilyn. Look. We're all happy to see Christian Borle do his song and dance thang, but is this much symbolism necessary? And also, who thought it was a good idea to put Tom – a man who is clearly white – in a turban and have him pretend be Indian for even one single second?

Your Aura is Purple
In this week's really bad non-musical musical number, Doormat Karen sings to Troubled Jerk Jimmy. We have mostly blocked all memory of said number except that everything became mysteriously purple during this scene, and Karen spent some time sniffing Jimmy's dirty sweatshirt like a true stalker. Those two things were so weird we may never forget them.

Psychiatric Meds are Hilarious, You Guys
After Ivy Lynn doled out more of her sage advice on acting, Terry Falls (Sean Hayes) decided to stop taking all his mental health medication so he could access his fear and feelings and be a good actor and stuff. Isn't that a great plot point you guys?! Those meds were making him miss the mountains! Now he can really act! It's totally no big deal that these medications, and the health issues they treat, are very grave and still highly stigmatized in this country. No big.

Speaking of Next Week
What even is going on with the end of this episode? Everything rides on whether or not Eileen throws her support behind Old "Bombshell" or New "Bombshell" and we just fade to black? With no answers? And as if that weren't annoying enough, the preview for next week's episode totally blows the part where Derek quits "Bombshell." Because we couldn't possibly answer the basic question we spent an entire episode building toward. But totally spoiling climactic moments from next week? Totally fine.