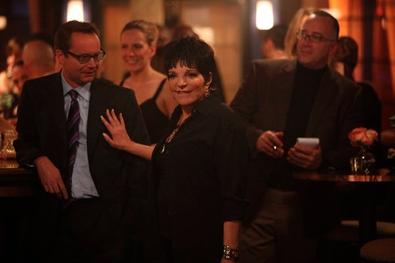 Miracles abound this week on "Smash," as the show moves to Saturday nights. Maybe somebody put something in the water in the writers' room. Maybe the show's endgame is suddenly more clearly in sight. ("Bombshell" is going to Broadway, you guys!) But whatever happened, we hope it keeps happening.

In "Bombshell" Land, the show is in tech, and Tom and Ivy are at loggerheads because he hired her mother – so much so that Ivy doesn't invite Tom to her big birthday party. Not knowing this, Tom plans his own surprise: Liza Minnelli will sing a new song he's written for Ivy's birthday. Meanwhile, Eileen and the handsome New York Times arts editor are on the verge of a romantic dalliance... or something. They both agree, at any rate, that Michael Riedel writes like a toddler on a sugar bender after too much candy corn.

At "Hit List," Jimmy and Karen are spending copious amounts of time hooking up in the costume closet, but Karen's annoyed that Jimmy won't let them go public with their relationship. In frustration, she spills the beans to Derek, which ends in a crazy pissing match between two really handsome men (Derek and Jimmy) over a very dull beautiful woman (Karen). It's the story of Marilyn Monroe's life, everyone! Get it? Get it?! Jimmy and Karen patch things up in the end, but not before Karen discovers a packet of white powder in Jimmy's jacket.

When it's time for Ivy's big birthday surprise, she arrives to discover Eileen is there, along with a cavalcade of press. Ivy lashes out at Tom, thinking he staged the whole thing for publicity. Then Michael Riedel himself turns up, because why wouldn't he. Here are some other high – and low – lights... not-live from New York on Saturday night...

Michael Riedel is Killing It, In a Good Way
Look. We get it. Self-respecting theater people are supposed to think Michael Riedel is scummy. Or at least, that's all you're supposed to say in public. But we just kind of think he's a genius. Case in point? His smarmy, hilarious appearance this week, wherein he showed the world that he knows exactly who he is, and what he does, and why it's important. Riedel rocked the whole Riedel thing, and we loved it.

The Liza Scene of Amazingness
It was all a mess until Liza Minnelli turned up. That was clearly the lesson of this episode, nay, this whole season, of "Smash." Because the minute she walked on screen, everything got better. Emotional conflicts turned realistic and involved real stakes. Megan Hilty's hair suddenly looked like it might actually move in hurricane-force wind. Songs sounded sweetly sentimental. Broadway actually seemed...kind of fun. And to have a living legend sing a birthday song for you? Now that's magical. Ivy Lynn beamed, and so did we.

The Quiet Triumph of Kyle
Out of nowhere, "Smash" seems to have found its storytelling sea legs, and you won't find us complaining. The best moment? The art-instantly-repeating-life moment when Kyle discovers his own confident narrative voice. Working with Julia and Scott – away from the sweet distraction of Jimmy's dreamy mug, and his oppressive will – Kyle can finally get down to business. Suddenly he's not a hack, but a sensitive, passionate contributor to his own show. Et voila! Now we have something to care about.

Julia Gets a Rare Moment of Success
Maybe the "Smash" writers just ran out of ways to hate on Julia. But rather than giving her cancer or letting her be mauled by a pack of wild dogs on Bergen Street, they've actually let her win at something. They've given her a genuine flirtation with Scott, who was previously her sworn enemy. They've also given her something to be good at in her professional life. Granted, she's good at working on the wrong show – "Hit List" and not "Bombshell" – but we like seeing this character succeed, and we like seeing Debra Messing's face with a smile on it.

The Evil First Ten Minutes
The folks at "Smash" really do like to shoot themselves in the foot. Prime example this week? The first 10 minutes of the episode, wherein we watched Ivy act like a pain in the ass diva while her director kind of sat back and whined about it instead of hauling her off for a private conversation about her unprofessional behavior and where she can go shove it. For that ten minutes this episode seemed like it was going to be as bad as all the others, and we almost pulled an Ivy Lynn and swallowed a fistful of drugs to save ourselves the misery. Thank god we stuck around for Liza, though...

The "Hit List" Number of Doom and Ironic Unoriginality
And then there's that amazing moment where we see yet another production number from the allegedly "edgy" musical "Hit List" that just looks like any other ultra-traditional Broadway book musical – only with guitars. Synthesizers, body stockings, a "sung-through" concept, and a girl flying in the big finale do not an edgy musical make. That's called "Cats," and that happened thirty years ago. The most hilarious thing? The "Hit List" number in question was about a girl re-inventing herself. If only "Hit List: The Musical" could do the same.

Seriously, What Are You Doing Richard Francis?
There are a plethora of writers in this week's episode, from the theatrical kind, to journalists high and low. Where Riedel was perfectly placed, and perfectly true to himself, the Times Editor just kind of acted weird. Because let's be real, not only would he not like "Hit List," there's absolutely no way he would give "off-the-record" advice to Derek Wills about who he should be boinking. The Times doesn't write that shit, and its editors wouldn't be caught dead stirring it up, either.

"You don't think he's hiding something, do you?" -Ana
Dun dun dun. We can hear the creepy music now. Thank you, "Smash," for punching us in the face with your bad dialogue and foreshadowing. Again.

Megan Hilty and Jeremy Jordan are the Most Gorgeous People on Earth
Riddle us this. How on earth did it take half a season to make Jeremy Jordan and Megan Hilty – two genuinely beautiful people – look...actually beautiful? Whoever finally found the magical angle from Hilty's left side, and figured out Jeremy Jordan must always be surrounded by gauzy gold light, hats off to them. It all came together in this episode for the first time. Ivy Lynn no longer looks like she's competing in the Equine Olympics, and Jimmy doesn't look like he's playing Conrad Birdie in community theater. It's slow progress, but it's progress.