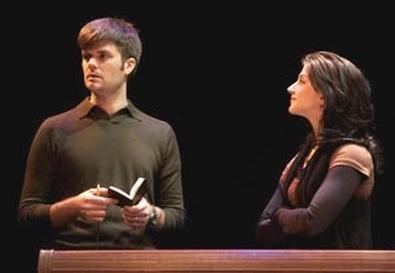 Photo Source: Sherri Jackson
Canadian playwright Daniel MacIvor's heartfelt family drama shifts between three distinct perspectives: a deathbed vigil for a young gay man named David (Bryan Jarrett), whose family has serious communication problems; a flashback to David's fling with a severe German man/angel of death (Joseph Mitchell Parks); and a series of monologues in which the family members wrestle with personal issues and share memories of David. The only thing they agree on is that "if David had his way, we'd all be dancing."

It's tempting to visualize what an odd cotillion that would be. His younger sister, Judy (Christa Kimlicko Jones), a cute semibohemian chick, would probably do freeform Grateful Dead moves. Older sister Tish (Helen Merino), a high-strung type with a compulsive, mirthless laugh, would no doubt live up to her claim of being out shopping when God gave out rhythm. Tish's husband, Sam (William Franke), a well-meaning doofus in a pudding-bowl haircut, would make with the stiff white boy moves, à la Al Gore.

All told, they're not a particularly easy bunch to warm to, which may be part of the reason why "The Soldier Dreams" doesn't quite have the emotional impact one might wish. MacIvor and director Judson Jones pack a lot into the play's lean 75-minute running time, but this is one instance where a more expansive, fleshed-out approach might have helped. More scenes of David himself would have been particularly welcome; we end up knowing more about his neurotic siblings than we do about him, although he is ostensibly the play's emotional center. Still, it's an absorbing production with its share of rewards, notably Franke's look of unsmiling befuddlement and Denny Lawrence's turn as David's partner, Richard. The only emotionally direct member of the group, he has an air of knowingness and superiority about him, which, given the people around him, is entirely justified.