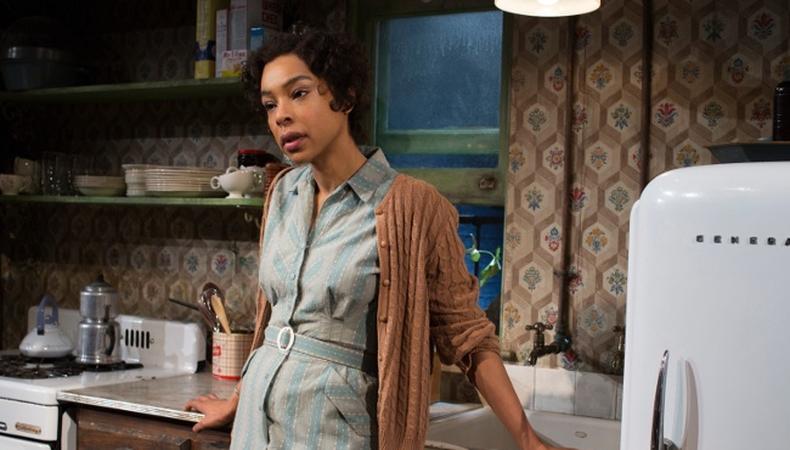 A Broadway debut powered by a legendary script and a star-studded cast sounds like a dream for an actor—throw in a Tony nomination for best performance in a featured role, and it’s clear Sophie Okonedo’s will be deferred no longer. Taking on the iconic Ruth Younger in “A Raisin in the Sun” requires a commanding grace and a fresh take on the material; Okonedo possesses both and drives the role like a true performer: with wise character choices.

“I didn’t start rehearsal with [Ruth’s] toughness,” explains Okonedo. “That started over time; I started at her core. She may be feeling all these things but she needs to cover it—she can’t be breaking every moment.”

Okonedo exhibits a strength in Ruth, wife to Walter Lee Younger—played by Denzel Washington—that hasn’t been seen in past incarnations of the character; it’s welcome added depth to the already arresting play about the Chicago-based Youngers, a $10,000 check, and the need to get out of an uncomfortable situation.

She plays into the weight of it all, demonstrating Ruth’s waning patience for her husband’s misplaced optimism in her dismissive hand gestures over breakfast eggs. But when it’s called for she shades her agitation with the protective ferocity of a mother—hand on hip and looking ready to pounce—and a sensitivity that drives home the desperation in the Younger household.

Okonedo, a Londoner by birth, says her minimal prior knowledge of the play worked to her advantage. “I didn’t have any baggage to bring to it,” she says. “I didn’t have the idea this is a classic, like in Britain with ‘Hamlet’ or something—[it] gave me kind of a nice, fresh start with working on the piece.

“The biggest challenge,” she admits, “was to be believable alongside LaTanya [Richardson Jackson, Tony-nominated as Lena Younger], Anika [Noni Rose, a fellow Tony nominee], and Denzel.”

She says despite the struggles of playing catch-up on the play’s context and getting the dialect right, she knew immediately she’d be able to capture Ruth. “As soon as I read it, I knew I could play her. I knew this was a part I could do,” she says. “I also thought the play was brilliant, so if I just stand up and say the lines somewhat authentically, I’m in a winning situation; the play does it for me. Doing a part in a rubbish play is that much harder. This is easy.”

Lorraine Hansberry’s in-depth look at the voracious human spirit brings the best out of all the actors. “[Ruth’s] big picture, her big dream, is to get the hell out of where they are,” explains Okonedo.

The actor has proven before that she’s deft at playing women looking to escape trying situations. In 2005 she was nominated for an Oscar for her role in “Hotel Rwanda.” Despite telling such specific, localized narratives, in both nominated performances the themes of survival, family, and strength are universal.

“The sort of hopes and fears and what’s going on deep inside the character of Ruth, the big themes of the play, can be understood by people from all countries,” she says. “Just come [to the performance] and ask questions. ‘Are we being served well by our society or not? Are we serving our society or not?’ And be entertained.”

Briana Rodriguez
Briana is the Editor-in-Chief at Backstage. She oversees editorial operations and covers all things film and television. She's interested in stories about the creative process as experienced by women, people of color, and other marginalized communities. You can find her on Twitter @brirodriguez and on Instagram @thebrianarodriguez
END_OF_DOCUMENT_TOKEN_TO_BE_REPLACED