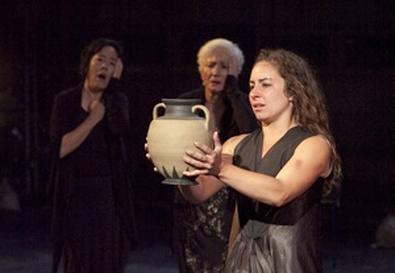 Photo Source: Jeff Ellingson
In this very immediate production, the House of Atreus may be royalty on speaking terms with the gods, but the characters types are quite of our everyday world. Elektra is an angry, rebellious young woman bent on avenging her father's murder. She is also the provoked child of relatively miscreant parents. Her mother, Clytemnestra, is played here as a lady who lunches, caftan included. Still, this is not a concept production. Carey Perloff's direction is unadorned; she lets the story and the storytellers speak for themselves.

In Timberlake Wertenbaker's world premiere translation, the language is clear and simple. But reminding the viewer that this script is a translation, the Chorus (Sharon Ott) speaks only in Greek, and on occasion several of the other characters mutter to themselves in Greek. Delivery reflects modernity yet is of no particular period.
So, at the center of this cursed clan, the daughter fumes and contrives and rails. Played by Annie Purcell, Elektra is filled with the rageful energy of youth, yet Purcell is an actor of matured skills whose character suffers unrelentingly, righteously, but always unsanctimoniously. Watching over Elektra, the Chorus Leader is played by Olympia Dukakis with the power of omniscience tempered by maternal care. Dukakis likewise rails, but hers has a more rational tone. Also on the rational side of the balance, Elektra's sister Chrysothemis will bend before she breaks—in a clear, convincing portrayal by Linda Park. But the most memorable performance here is given by Pamela Reed, who creates a hypersecure, deeply snarky grande dame in Clytemnestra. Reed has no moments of declamation, no grandiose "acting." Instead, she has found every syllable of humor, every possible place to arch an eyebrow or barely conceal a smirk, in a remarkably natural yet unyieldingly regal portrayal. A fascinating triangle of three different types of power is created on the stage among Clytemnestra's unshakable self-confidence, Elektra's unquenchable sense of vengeance, and the Chorus Leader's insistence on calm logic as the way to succeed.

Jack Willis gives the Tutor a lively sense of humor and irony despite the "horrifying" tale he tells, Manoel Felciano gives a simple and direct rendering of the wide-wandering Orestes, and Tyrees Allen is despotic and snobby as Elektra's unwanted stepdaddy.
Bonfire Madigan Shive's music adds furious crests of wailing cello, sorrowful cries of a Waterphone, and story-invoking drumming to this outdoor evening that evokes many things ancient Greek and many things wrenchingly current.