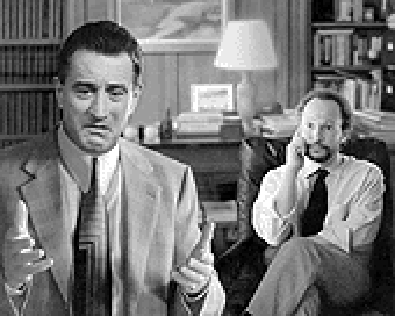 "Jackson Pollack said that an artist is someone who loves the smell of their own shit," reflected psychologist Marilyn Jacovsky, Ph.D. "I think that's true. We all start at a place of being different. It's just an affection for that difference that allows you to call yourself an artist." That affection, said Jacovsky, can take actors a lifetime to cultivate. It's no easy task to arrive at a healthy sense of self-acceptance, and yet without it, it can be hard to maintain the confidence to hang in this business long enough to find work. It can also be hard to do the work itself.

"It's very hard to learn to embrace the frailties of a character if you haven't learned to embrace them in yourself," said Jacovsky, who has a large number of patients who work in the performing arts. "That's what therapy is about: for you to be the best that you can be, with a great affection for the worst you have been."

If it weren't hard enough to embrace oneself, perhaps choosing to pursue a career in acting--where one is faced with constant rejection--can make it that much harder. A lot of actors come to L.A. from somewhere else, arriving without a support system and trying to succeed in one of the most competitive professions--a profession in which, even if they are successful, they are likely to spend much more time not working than working.

Said actor Katy Selverstone, "If you look at the statistics, it's something like 2 percent of all the unions combined makes a living doing acting in any one year. You're up against extraordinary odds, and not to turn what is going to be a lot of rejection either against yourself or against other people is, I think, a really tricky thing.

"There's a lot of pressure to believe that a smart person, a capable person, can handle their own problems," Selverstone continued, "that it's a matter of willpower and a matter of character. I just don't think that's true. Like anything else, there are skills involved--some of which may come very naturally to you, and some of which don't."

Seeing a therapist can be an illuminating way to develop those skills, yet there remains a kind of stigma about therapy with regard to actors. There are plenty who believe all actors are in some sense "crazy" and that it is this very craziness--those individual quirks and neuroses--that can make an actor's work so interesting.

"I've heard people say therapy destroys your spontaneity," said Selverstone, "that when you understand too much about yourself it messes with your imagination, and your work is going to become less interesting as a result. I don't think that's true. My therapy was much more about not being neurotic than about being neurotic. Everybody is neurotic in some way, right? My experience has never been like, 'You're going to be like a blank slate, I'm going to strip you down, and you are going to be normal.' There isn't any such thing as normal; there's just what is right for you."

Proponents of therapy say that one of the great things it can do is to open up your range of emotional choices--giving you a full palette to work with in life and onstage.

"If, early on, you have the choices of getting really angry or shutting down," said Selverstone, "now all of a sudden you have other choices. You can ask yourself, Is this something I want to talk to this person about? Or you can perhaps choose to just let it go."

Acting teacher and hypnotherapist Toni Attell said the most common challenge she helps actors through is a fear of success.

"That's one of the biggest things that sabotages any of us," said Attell. "We work so hard toward success, and then suddenly we're so close to getting it, and it will be right there, and you know that if they can hang in there just a little bit longer it's going to work for them, but they want to stop. Either it's a subliminal fear of success or a fear of failure. So, at that point, hypnotherapy can help calm the person down, have them rationally look at the situation, take a look at how hard they've worked to get where they are, and have the patience to go just a little bit further."

Psychotherapist Sandy Kaufman said the most common mental challenge his actor clients face is "trusting themselves and not trying to get into the minds of other people. Actors are always trying to figure out what other people are thinking about them."

One insightful process a therapist may guide you through is simply identifying the reasons you chose to become an actor in the first place.

"Why does someone become an actor? I think that you need to start with that question," said Jacovsky. "There are many reasons, but I think that a primary reason is a kind of love/hate relationship with attention. On the one hand you're desperately seeking attention, and yet it's under the guise of another character that you try to summon it. Maybe you are escaping your own personage because of issues of abuse. Whatever it is, there is something, and if you're not aware of it, it's driving you and you are not driving it."

If you decide to seek the help of a therapist, perhaps the most difficult part is choosing the right one. Shop around. A recommendation from a friend or doctor is often the best way to begin.

"Remember, you're hiring the therapist," said Jacovsky. "The therapist isn't hiring you. You need to go to a few until you feel that you have a certain rapport, because that rapport is the soul of the work. It's important not to feel intimidated by the therapist."

Many suggest trusting your instincts. Said one actor/director who wished to remain anonymous, "If you feel comfortable with someone on the first meeting, then do a second one. If there is something at all deterring you, don't go back. It will only stop you down the road. We have gut instincts for a reason. If you look at them and think, I can't possibly spend a year talking to this person, then don't."

"You have to be important enough to yourself to continue to pursue the right person," said Selverstone, "and the right person for you is going to be somebody who makes you feel safe, free, and someone who will challenge you."

Some therapists will even offer the first session for free. This is a time to raise any questions you may have. Some questions to consider: What experience and training in working with these particular issues do you have? What are your credentials? Where did you go to school? Are you available to me when I am in a crisis? What do you feel the direction might be with some of my issues? How would you like to work with me? What is your school of thought? Do you give opinions and exercises or just listen? How long do you believe someone should be in therapy?

This last question can be particularly tricky. There are therapists who are content to keep you coming back for years.

"Ideally the therapist and the person set goals," suggested Kaufman, "so it's not a never-ending thing. There's a beginning, middle, and a late stage to therapy. You and the therapist can say, 'OK, we've gone through therapy for six months. Are we clear as what we are looking to get out of it?' You need goals so you can assess progress."

Of course therapy is not the only route to a sense of mental health. Kaufman, for example, suggests a wealth of activities for his clients to use in addition to therapy.

"I really try to fill up an actor's life with their own life," explained Kaufman. "I often will ask actors to volunteer doing anything because actors are generally very self-involved. So I ask them, Are you volunteering? What are you doing that doesn't involve you? They look at me like I am crazy. And I say, Your life has to be filled with your life. It's important for people to have a full range of activities so that their life is not 'I'm an actor, and this is all I do, and every person I meet I have to be an actor for.' A key word is balance--finding a balance between being a real person and being a professional actor, and they are very different."

Added Kaufman, "Try different things. Try meditation, try yoga, try hiking and swimming and pottery classes. Whatever people are going to do to enhance themselves and relieve themselves of the mind being cluttered, I am all for."

There are a few helpful resources available for actors seeking a therapist. The California Board of Psychology website at www.psychboard.ca.gov offers a wealth of consumer information, as well as a system that can verify whether a therapist is licensed by the state. The American Psychological Association website (www.apa.org) has many useful articles and can also tell you if a therapist has been sued. The APA can also guide you to a referral system in your area if you call (800) 964-2000. BSW