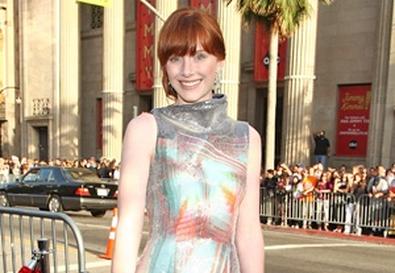 Bryce Dallas Howard is a busy woman. She is literally doing this interview while running to a location in Portland, Ore., to see its view and approve it for the next Gus Van Sant film.

The location exceeds her expectations. "This view is gorgeous! I approve!" she exclaims midsentence, then immediately gets back to discussing the intricacies of her character, Fisher Willow, in the film based on Tennessee Williams' "The Loss of a Teardrop Diamond." She may have recently garnered press for taking over Rachelle LeFevre's role in the upcoming film "Eclipse," the third installment in the "Twilight" series, but it is Howard's strong, emotional performance as a rebellious Southern socialite who falls for an unsuitable young man in "Diamond" that has grabbed the attention of critics.

Back Stage: "The Loss of a Teardrop Diamond" was until now an unproduced screenplay by Tennessee Williams. So you get to originate a lead female character of his. Where do you start?

Bryce Dallas Howard: That's actually something I dealt with for quite a while. After I knew that I was going to be a part of this piece, I was suffering to figure out how I even tackle material like this. Obviously it's a role that is quite significant and a very multifaceted character, but the thing that threw the wrench in what would normally give me confidence was that it was written by Tennessee Williams and that I would be the originator of it. I felt such a heavy responsibility and a bit of nervousness about wanting to do the role justice. It's a very rare circumstance that a writer who has been so celebrated had a piece of text that's been unproduced and done after his passing, so here's an opportunity to celebrate his work again but in a very new way. So I relied heavily upon my friends. I have a wonderful acting teacher, this gentleman named Islean Kirker, who's someone who, actually, I went to NYU with. He is my rock whenever I am stumped. He read it and had an incredible understanding of the piece, because he comes from a very strong theatrical background. What resonated with me was, the first thing that he said after he finished reading it was, "Oh, she's a hedonist." A light bulb went off in my brain. I was like, "Of course!" That translated to me as that she is totally unapologetic. She is living in a provincial Southern society, but there are aspects of her that are truly grotesque, and she's unapologetic about it. That notion built the foundation for me of how to approach the scene work and her backstory and all that.

Back Stage: Is there anything you would have wanted to ask Williams?

Howard: What's wonderful about working on a text with a writer like him is that he was so prolific. So even though I couldn't ask him direct questions, this was written during the 1950s, at the same time when he was writing all these other [works], his greatest plays. So I used those as points of reference to understand what was going on: the issues that he was tackling, the things that he was most fascinated by, the themes that he was investigating. The way in which I looked at the character was it's almost like she's Blanche DuBois but 15 or 20 years younger. She's Blanche DuBois before she became Blanche DuBois, where she still had a chance of getting her life together, and that's what this character is struggling with. She's been institutionalized, she's lost her mind, but she's gotten hold of her sanity again, and this movie captures the 48 hours or so where her sanity is teetering and she might be going over the edge. It was helpful to watch the [Vivien Leigh] Blanche DuBois performance and study that. Also, people have written dissertations on his work, and so I looked at those—understanding, of course, that's not necessarily his point of view on specifically this movie, but it provided insight and a window into possibly what he was thinking.

Howard: I like to do things over and over again. I've had some wonderful adventures with filmmakers who like to do things spontaneously and don't necessarily like to rehearse, and that's something in itself that's very fun. But specifically with a text like this, which has a theatrical nature to it, I was glad that Jodie Markell, the director, provided for a good hefty chunk of rehearsal time and that Chris Evans, who played Jimmy Dobyne, felt strongly about having a lot of rehearsals as well. We wanted to make sure that the chemistry was there. This is a very nuanced relationship. These are two people who, because of their status in society, should not belong together. But they're two outsiders and they find one another.

Back Stage: Do you think it's possible for an actor to be too rehearsed?

Howard: I think an actor needs to gauge that for themselves. If they're starting to feel in their gut that it's a detriment, then maybe they're losing their connection to the character or they're intellectualizing things too much. It's like a painter: You need to be bold enough to put paint on the canvas—that's going to be permanent—but then you also need to know when to stop. That's, I think, the key to the rehearsal process.

Back Stage: Jodie Markell was very passionate about this project. Was she very specific about what she wanted from you?

Howard: She was incredibly collaborative, incredibly inclusive, and very communicative about what her cinematic approach and vision for the character was, but also had an inordinate amount of insight into the character that I felt strongly about leaning upon. I wanted to know more about what she felt for the character than I would normally from a director. Because she's also an actress, I kind of wanted one big long line reading, to be honest. [Laughs.] She's a talented actress, and I knew that she had an idea in her mind of what she wanted the performance to be. Then of course, within that, she struck a perfect balance of the moments when to guide me and then the moments to just let me go a little crazy and go for certain things and then guide me from there. Working with Jodie was fantastic because she had a specific vision, so she had a direction, but then it wasn't oppressive in any way. It was supportive. All of her work with me felt simply supportive. That's the best way to direct, I think, because it makes the actor have confidence and it makes them feel like they're on the right track, and it was great. A part like this, if I had felt like I was derailing it in any instance, I would have totally folded in on myself and been terrified, but she worked hard to boost my confidence and made me feel a sense of ownership over this character that she had been living with for upwards of 10 years.


Outtakes
- Other films include "The Village," "Manderlay," "Terminator Salvation," and "Spider-Man 3"
- Father is actor and Oscar-winning director Ron Howard; uncle is actor Clint Howard; husband is actor Seth Gabel ("Dirty Sexy Money")
- Doesn't feel ready to be a director just yet, despite her family pedigree and previous directing work (the short film "Orchids"): "I would love to direct, but I know that I have a lot more to learn before I can take on that role responsibly and feel like it would be a good investment for people to make. But it's definitely something I would love to explore in the future."