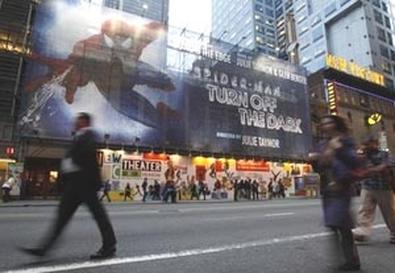 Photo Source: Kathy Willens/AP Photo
"Spider-Man: Turn Off the Dark" lead actress T.V. Carpio suffered an injury that will leave her out of the troubled Broadway production for two weeks, according to the show's PR representative.

"T.V. Carpio sustained an injury on Wednesday, March 16, during an onstage battle scene with a fellow actor," spokesperson Rick Miramontez said in a statement. "On doctor's orders, she will be out of the show for the next two weeks."

Broadwayworld.com described the injury as "whiplash."

Natalie Mendoza had previously played the role of Arachne but dropped out in January about a month after sustaining a concussion when a piece of equipment hit her on the head backstage. Carpio, who was named her replacement, is the fifth actress to be injured since last fall.

The New York State Department of Labor has been watching the production closely since actor Kevin Aubin broke both of his wrists when launched from the back of the stage during a rehearsal. A series of actor mishaps have continued since then, to the extent it has been parodied on the cover of The New Yorker magazine.

America Olivo will be performing the role of Arachne during the time that Carpio is out of commission.