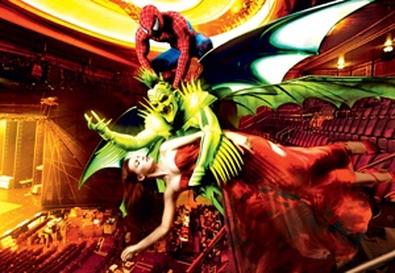 "Spider-Man: Turn Off the Dark" will resume preview performances Wednesday evening, producers announced today. Wednesday's matinee has been cancelled and rescheduled in the wake of an accident that halted Monday night's performance and sent one actor to the hospital.

"Occupational Safety and Health Administration, Actors' Equity, and the New York State Department of Labor have met with the 'Spider-Man' company today to discuss additional safety protocols," Rick Miramontez, a spokesperson for the show, said in a statement. "It was agreed that these measures would be enacted immediately." Miramontez added that all future performance after tomorrow will proceed as scheduled.

Christopher Tierney, 31—one of nine actors who perform stunts for the title role—was taken to Bellevue Hospital Center last night after being injured in a scene in which the character Mary Jane falls from the edge of a bridge and Spider-Man attempts to rescue her. Audience member Michael Cohen witnessed the accident.

"She fell, he came running to the end of the bridge, then kept going," Cohen said. "He didn't seem to be particularly happy. He went head-first down. You could see the cable coming after him."

A cable attached to Tierney apparently broke, sending him plunging into the orchestra pit at the Foxwoods Theatre. According to Cohen's and other accounts, screams, then pleas for someone to call 911 came from the pit.

"It was hearing, 'Call 911'—when that started to hit the air, it didn't feel right by any means," Cohen said. "Then you started to hear some sobs and they cut the mics from down there in the pit."

According to Cohen, an unidentified object followed Tierney as he fell.

A spokesperson at Bellevue told Bloomberg that Tierney is in "serious condition." According to a report at BroadwayWorld.com, the actor suffered broken ribs and some bleeding. Tierney is the fourth "Spider-Man" actor to be injured in action since the show began rehearsals. Representatives of the New York State Department of Labor today visited the show's home at the Foxwoods Theatre. Maria Somma, a spokesperson for Actors' Equity Association, attributed accident to human error.

"Actors' Equity Association worked today with the Department of Labor, OSHA and the production to determine that the cause of the accident at last night's performance of 'Spider-Man' was, in fact, human error," Somma said in a statement. "Further protocols are now being implemented, including redundancies recommended by Equity, the DOL, and OSHA, to address this situation as well as other elements of the production. Equity continues to vigilantly monitor the production for the safety of its members."

"Spider-Man"—reportedly the most expensive musical in Broadway history, with an estimated budget of $65 million—is scheduled to open Feb. 7 following multiple delays.