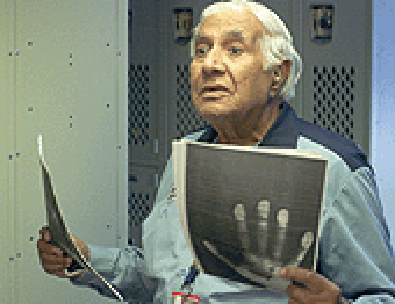 In Steven Spielberg's latest film, The Terminal, a small Indian man with an arthritic shuffle and a mischievous grin nearly steals the film from stars Tom Hanks and Catherine Zeta-Jones. The tragically hip will recognize this older gentleman as Kumar Pallana, the adorable, eccentric 85-year-old actor also featured in all three of writer/director Wes Anderson's films.

He was Kumar the safecracker, one of the five dimwitted henchmen, in Anderson's debut feature, Bottle Rocket. Then he was Mr. Littlejeans, the groundskeeper at the private school in Rushmore. Pallana went on to play Gene Hackman's butler/right-hand man, Pagoda, in The Royal Tenenbaums, and he's shared the screen with James Caan, Anjelica Huston, Gwyneth Paltrow, Ben Stiller, Drew Barrymore, and Bill Murray. He also briefly appeared in Danny DeVito's Duplex and the indie Bomb the System.

Pallana's charisma and comic delivery onscreen has given him a bit of a cult following. He has a startlingly hearty guffaw, and his dialogue often has a laid-back machismo with lines ending with "man"--like, "I blew it, man," "It's your fault, man," and "Best play ever, man."

In his latest role in The Terminal, Pallana portrays Gupta Rajan, an immigrant janitor who is at first suspicious of Hank's refugee character, Viktor Navorski, but who ultimately forms a touching friendship with Navorski. The role also gives Pallana a chance to showcase his talents for juggling and spinning plates--skills that reveal only part of Pallana's fascinating 70-year history of performing in the industry that goes back to his youth in still-colonial 1930s India. Pallana, a high school dropout, initially wanted to be a singer. This did not exactly thrill his father, a successful car dealer, so he had to do everything entirely on his own.

"I wanted to entertain the peoples," says Pallana in broken English. "I had the desire like a kid, you know? But also, I had a necessity to support my family, and I don't have other choice. So when you don't have any degree in this country or any country, you could not get a job. You had to do digging the hole, labor work, which I don't do. So whatever I want to do I had to do on my own. We were only lucky that there were community houses with small gymnasiums where you don't pay nothing to become a member. And then the peoples who had the experience, the old-timers, you can talk to them and they say, 'Oh, come in my house. I can show you how to do a headstand.'"

Initially it was these "old-timers" who taught the young Pallana how to pull off extraordinary feats of balance and yoga that he later incorporated into festivals when he relocated to Kenya and South Africa. Once India gained its independence, in 1946, the Pearl S. Buck East/West program invited Pallana to New York on the vaudeville/burlesque/county fair circuit. He developed his own one-man show, Kumar of India, featuring juggling, spinning plates, rope tricks, chair-balancing, and magic, and during the 1950s and '60s Pallana traveled the world performing at nightclubs in Paris, London, Madrid, and Casablanca. He opened for the likes of Sammy Davis Jr., Martin & Lewis, Harry Belafonte, and Milton Berle while in Las Vegas, and he appeared on several classic TV shows, including The Ed Sullivan Show, The Mickey Mouse Club, and You Asked For It. Pallana's fascinating fate also led him to perform for U.S. troops in Alaska on Bob Hope's USO tour.

Pretty soon after that, Pallana's luck changed--his wife became sick of living out of hotels, their New York apartment burned down, and a crippling car accident took Pallana off the market for years. "That's show business. You go up and down. The reason I'm telling you all this sadness, is that it's your destiny. It took me 20 to 30 years after the accident to be in this shape. So, after the accident, I wind up in Texas. I had no choice. I could not walk," he says.

While in Texas, his son opened a cafe called The Cosmic Cup, and Pallana became the yoga teacher in the studio upstairs. The cafe featured chess Monday nights and jazz music Tuesday nights, and the bohemian atmosphere began attracting the local University of Texas students, which eventually led to the unexpected next phase of Pallana's career. "All the young people come [to The Cosmic Cup]. So Wes Anderson and [writing partner/actor Owen Wilson] start coming. They were good friends with my son, but then they find out that I'm an old-timer and all my experience and we became friends. Then [Anderson] gave me the part in Bottle Rocket. We have a good understanding. Good part, big part, small part. I just saw him a couple of weeks ago, and I talk to him on the phone. He always wishes me the best--a very good friend, but more than that, we are like a family."

Spielberg has said, "Kumar had the part the minute he walked in the door," but Pallana doesn't recall it being that easy. First he went through CD Debra Zane's audition twice because he needed more time with the sides. Then he had to audition again with Spielberg in person at the studio. When he first met the Oscar-winning director, he gave him a hug and then quickly apologized. Spielberg shrugged it off and put Pallana at ease by asking him about his background before having him read the sides. "By that time I was fresh. I read, and he said, 'One more time. This time you do it in your own style.' And that opens my mind. I realized that this guy, I want to work with. I feel that he understands something. So I did it my own style, and he said, 'You got the job.' I said, 'Thank you, sir.' And he said, 'Now it's my turn to hug you.' That made me feel so great," Pallana recalls.

Sadly, filming for The Terminal coincided with filming on Anderson's latest project, The Life Aquatic, so for the first time, Pallana could not be a part of Anderson's work. He can next be seen in writer/director John Turturro's big-screen New York musical Romance & Cigarettes alongside an all-star cast that includes James Gandolfini, Susan Sarandon, Steve Buscemi, Kate Winslet, Christopher Walken, and Mandy Moore. So what does the "old-timer" ultimately want out of his career?

"What do I want?" he asks, puzzled. "I want more job. I want to die entertaining. Somebody called me and said, 'You are 85?' And I said, 'No, man, why you always hooked up with the number? Switch the 8 and 5, it's 58'--same thing, just turn other side of the coins. So I'm turning other side like a coin. I'm 58. I've been in this country since '46, '47. It took me 50 years to appear in [The Terminal]. Tomorrow is another day. Tomorrow will be a better day. You stick with your own philosophy and you'll find that, yeah, maybe you're a small actor today, but tomorrow.â€Ś Show business--today you're playing your part, but tomorrow it will be different, and with this philosophy I survive."