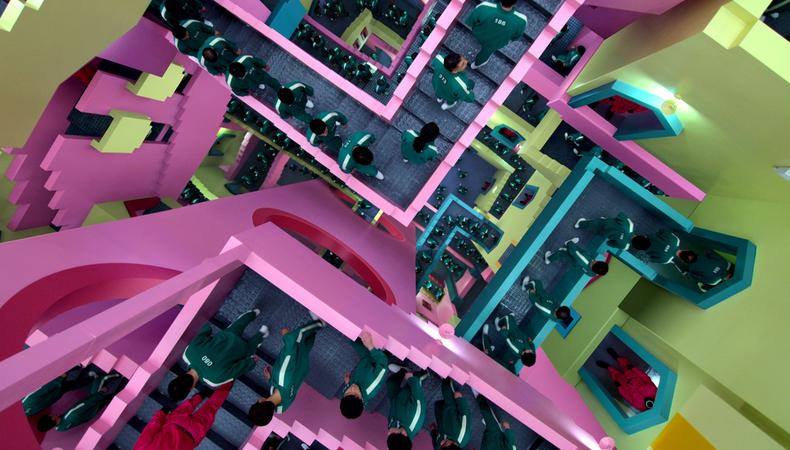 “Let us break convention”: That was the primary intent of “Squid Game” production designer Chae Kyoung-sun. And it seems to have worked. The Netflix thriller, about a group of adults who compete in a series of deadly children’s games for cash, has become a global sensation. Now, it’s the first non–English language series to be nominated for the Screen Actors Guild Award for outstanding drama ensemble.

What was the process of designing each game? Was it largely written on the page, or were you creating the designs from scratch?

The first image that spoke to me after reading the script was used as the main art concept: a broken ladder stood slanted, surrounded by high walls. A man was underneath it, resigned, looking up at the ladder but unable to make the climb. I was inspired by this illustration and used it as the motif of “Squid Game.” Though the depiction looked like it was straight out of a children’s story, I was saddened and moved by the man unable to move up the metaphorical social ladder amidst fierce competition. The image was my first step [toward executing] the director’s vision of a fantasy concept, with motifs drawn from children’s stories and infused with Korean aspects. I wanted to avoid the generic impression of this genre: a game of survival and death.

Why did you choose such a vibrant color palette for a show with such dark, deadly themes?

I wanted to use the colors in an ironic way. Rather than using the traditional color matches, I wanted to break the conventional use of colors. While colors are boldly used in fashion and culture these days, I felt that using colors in movies has [been] more conservative. I wanted to be bolder. Let us break convention and create rules only for “Squid Game,” was my thinking. For the mazelike hallway, I made the surrounding space pink to indicate oppression of the participants wearing green. This is in line with the masked men wearing pink, as well. To the participants, the masked men are objects of fear who bear guns and take lives. 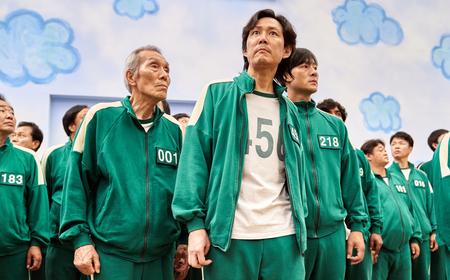 How closely did you work with the other design departments—costuming, especially—to achieve a cohesive aesthetic?

Pink was the color I first brought up for the art concept, so I was delighted when the costume designer suggested using it on clothes. Our minds were in sync. Once it was decided that the masked men should wear pink—a childish color that evokes nostalgia—the rest of the color map was filled seamlessly. It was then decided that the participants of the game, who are on the other end of the character spectrum in the series, should wear green tracksuits commonly worn in Korea on school field days in the ’70s and ’80s. Once the colors of the two character groups were decided, building on the color map used in the artistic mise-en-scène was straightforward.

How did you work with the cinematographer to enhance the dizzying visual effects of the sets?

We had meetings upon meetings with the cinematographer before we started filming, during the preproduction stage. The cinematographer was surprised by the structure of the set, but we were able to talk it out. We rented three or four massive set spaces and created the set a month or two before filming. Each set took one or two months to build. We made plans and efficiently followed through. We even simulated the games. The directing team and the production team conducted simulations of all of the games, from squid game to the glass steppingstones game to tug of war.

The set for the mazelike hallways had to be big enough for more than 100 people to move around in. Safety was a priority. The filming staff had to place their equipment and lay out rails while moving through the narrow hallways, but the space was not big enough. We put a lot of thought into where the cameras should be placed to convey the scale of the space. Since the set was like a maze, we had to tear down a lot of the space to allow room for filming.

What was your biggest design challenge working on “Squid Game”?

Our goal was to create a new genre of visuals. The story is based on playing games from our childhood amid a merciless situation. If we used unusual and contrasting visuals that conveyed this clash, we could achieve synergy. The first concept was to create new visuals that infused childhood nostalgia with a Korean version of fantasy. Another goal of ours was to include characters in each of the game spaces. We wanted the actors and viewers to be immersed in playing the games in the game spaces.

Casey Mink
Casey Mink is the senior staff writer at Backstage. When she's not writing about television, film, or theater, she is definitely somewhere watching it.
END_OF_DOCUMENT_TOKEN_TO_BE_REPLACED