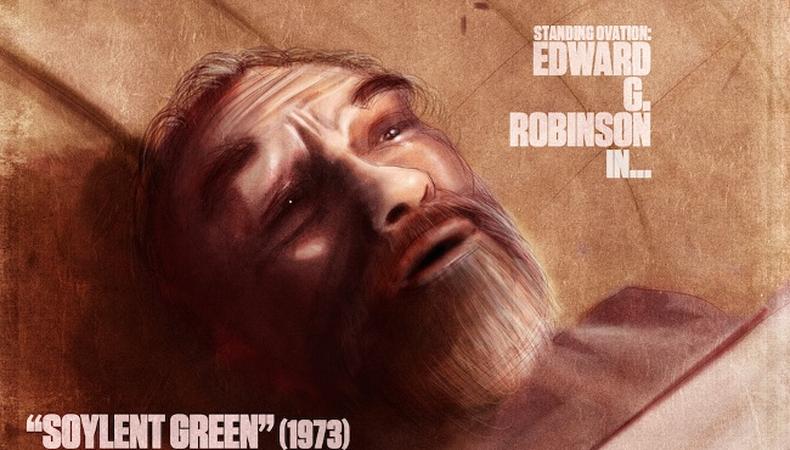 For film buffs and fans of film acting, there is a persistent wish for a favorite actor to go out with a bang, for his or her final film to be something magnificent that equals or surpasses earlier work. Many movie stars choose either to retire or slowly fade out in a slow succession of increasingly peripheral roles. In the 1970s, many great stars of the golden age seemed to literally go down with the ship or the plane in all-star disaster films, usually playing parodies of themselves. So though occasionally a performance might come close, it is unlikely that an actor will ever give a last performance with the stunning emotional resonance of Edward G. Robinson’s work in 1973’s “Soylent Green.”

The film is an environmental parable and, along with “Planet of the Apes,” could be considered the granddaddy of the “dystopian future” genre. But in 1973, the notion of a world destroyed by pollution, overpopulation, and food shortages was frightening and fresh. The fact that every ill depicted in “Soylent Green” (set in the then-distant world of 2022) is actually coming to pass has only made the film seem prescient.

Robinson plays Sol Roth, the partner, friend, and father figure to Charlton Heston’s Detective Thorn, a cop tasked with saving the world. As a man who remembers the Earth’s beauty before it was compromised, Robinson’s Sol symbolizes nothing less than humanity itself, and is given scene after scene where he conveys the wonder and longing for a world that exists only in his memory. These moments—Robinson remembering, for example, how food used to taste when he was young—are both chilling and touching. He breaks your heart, but Robinson is never sentimental.

That Robinson was dying of cancer during filming makes his rich performance even more psychologically intricate. In real life, Robinson died two weeks after filming ended—and he dies in the film itself. “Soylent Green” imagines Sol Roth’s elective euthanasia scene as the final word in personalized shopping. After making his AV preferences for his final journey, Roth is escorted to a large room where he lies on a gurney, imbibes some sort of (presumably) fatal drink, and begins what can only be described as one of the most poetic and powerful death scenes in film history.

As the soundtrack plays an assortment of elegiac Beethoven and Tchaikovsky, Sol watches a 1973 version of an IMAX screen project the breathtaking beauty of the vanished world: sunsets, birds, oceans, plains, flowers. Director Richard Fleischer gives the actor a series of wonderful close-ups, and what Robinson is able to convey with only his eyes is stunning in both its precision and economy. In these close-ups, the actor is able to wordlessly communicate a great many things: the brilliance of the late silent period; the scope of his personal struggles; the totality of his expansive body of work—all with an incredibly light, unmannered touch.

Though he was inexplicably overlooked for an Oscar nomination for “Soylent Green” (and, indeed, for his entire career), he was awarded a richly deserved posthumous Oscar for lifetime achievement. Here’s to you, Mr. Robinson.