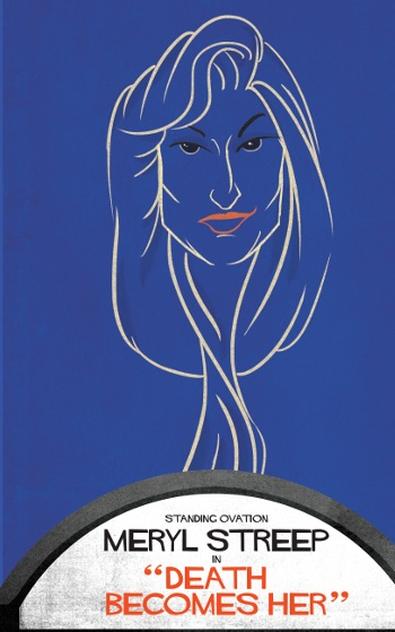 Madeline Ashton asked to be pushed down that flight of stairs.

Not explicitly, of course, but as Ashton in the 1992 dark comedy “Death Becomes Her,” Meryl Streep gives a master class on marital warfare by railing against her mortician husband Ernest Menville (Bruce Willis) at the top of a winding staircase, gleefully provoking him until his only answer is to toss her down, like a rag doll, to her not-quite death.

As Streep and Willis verbally spar, lodging insults at one another with increasing vigor, she labels him “flaccid,” a word that visibly gets under his skin and a word that she then latches onto like an eagle to its prey. She repeats it, rolling it around in her mouth, her neck and shoulders swiveling loosely, both as an emphasis of the pleasure she gets from teasing out this dangerous barb, and a physical embodiment of it. Then she does something so absurd, so id, that it could only come from La Streep: She sticks out her tongue and shakes her head, wagging it and dragging out the word—flaaaa-a-a-a-a-accid—like a childhood taunt made manifest. It’s in this act that she seals her fate.

“Death Becomes Her” is a campy, uneven film about two vain women (Goldie Hawn plays Madeline’s rival, Helen) who seek out eternal youth and beauty and end up creakily immortal. While it may lack cinematic finesse, it’s buoyed by the central performances and is a reminder that, while this is no “Sophie’s Choice,” Streep has never been one to phone in a job. In fact, her entire résumé is filled with flashes of brilliance like this, a testament to her ability to work beyond the limits of any project she’s in.

Praising a performance from Streep—often referred to reverentially as the Best Actress of All Time—is a bit like preaching to the choir at this point. But it’s in this forgettable flick that she unleashes her comedic prowess in its most abandoned, expansive form. There’s a physical freedom and playfulness here that accompanies her hallmark verisimilitude and emotional honesty.

As Marilyn Monroe once said, “It takes a smart brunette to play a dumb blonde.” In the same sense, it takes a generous, acute actor to play a woman so ruthlessly selfish and egomaniacal with this much skill. Still, few could make it as lusty and earthy as Streep does. Madeline is a sort of ur-Housewife (of the Bravo genus), but Streep fleshes her out with rising tides of zany warmth to balance her overriding caustic traits. Like all master manipulators, Madeline knows you have to charm your audience before you can repel them. In fact, just short of mugging, this performance has a burlesque-like showmanship, a wink-wink, nudge-nudge flavor that lets you know she’s having as much fun as it looks—something of a departure for Streep, whose work can tend toward the internal.

Madeline’s arc is ultimately one of physical transformation, from withered has-been to blossoming ingénue, and Streep is able to find a throughline of humanity where most others would not, from wounded self-consciousness as a woman maddened by her own wasted beauty to demonstrative imperiousness once her youth has been regained. It’s a bit of a coup, and it’s delicious to see her pull it off.

Recently, Streep’s comedic talents have been put on display readily, but they can be lacking in the rich power of sexuality that she so fully embraces here. When the otherworldly elixir restores her character’s body to its former glory (each breast and butt cheek hoisted by movie magic with a creak and a pop), she examines herself in the mirror—first in awe and then orgasmic pleasure—before lustily vamping in a raspy murmur, “I’m…a…girl!” Plus, the film features what I believe is a cinematic first—an actor with her head rotated 180 degrees looking down at her posterior. When it dawns on Streep what is happening, she cries out, “My ass! I can see…my ass.” The moment is both believable and laugh-out-loud funny. Now that’s talent.

Max Berlinger is a writer and editor based in New York City.