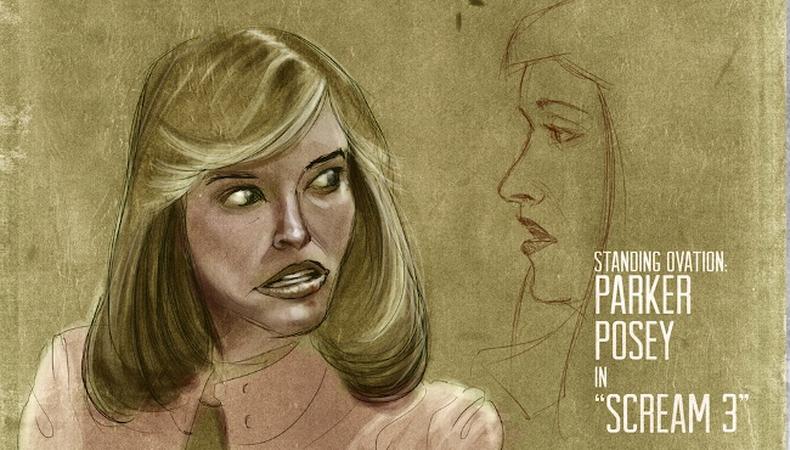 “You! Like I’m ever going to win an award playing you,” Jennifer Jolie yells at Gale Weathers in the third and most self-referential (and laughable) edition of the “Scream” series. Jolie (played by Parker Posey) is an actor playing Weathers (played by Courteney Cox) in “Stab 3,” the movie within a movie, which serves as the setting for the murders of “Scream 3,” the series’ then-final chapter. It is meta.

With streaky blond highlights, Posey looks like a trashy version of Cox’s streaky red days in the first “Scream.” The hair is almost as loud as Posey, who speaks with a shrill voice and manic energy.

As an actor haunted by a masked murderer, Jolie initially lets terror consume her in the funniest of ways. “Where! Nancy Drew wants to know where,” she screams when she gets one too many questions from her onscreen counterpart about a previous murder. With her hair twisted up into two Björk-like balls and a cigarette shaking between her fingers, she’s as funny as she is frightened.

It’s not until the film’s second act that Jolie embodies the fictional detective she mocked as she sets out to figure out whodunit. “Fifty dollars?! What are you, a reporter for Woodsboro High?” she reproachfully asks Weathers as she forks over a ring to Carrie Fisher (played by Carrie Fisher) in order to gain access to a room full of headshots. (Seriously, it’s a really meta film.)

But Posey pulls it off.

A standout in a bloated cast (Jenny McCarthy, an unknown Emily Mortimer, Scott Foley) and drowned by an inconceivable third act twist, Posey breezes through with such comedic ease it’s hard to believe she was even starring in a horror film.

Still known as the Indie Queen at the time, Posey had begun taking on roles that seemed to be more about the paycheck than artistic expression. In addition to “Scream 3,” she starred in “Blade: Trinity,” “Josie and the Pussycats,” and, later, “Superman Returns.” But what separated Jennifer Jolie from those other mainstream attempts at the time was that her comedic performance served as a precursor to some of her best work in the Christopher Guest films to come.

The Guest films, which are largely improvised, are also built around a world of familiarity that lends itself to mockery. “Best in Show”—which came out the same year as “Scream 3”—is centered on the competitive environment of dog showing; “A Mighty Wind” plays on the folk sensibilities of the music industry; and “For Your Consideration” skewers awards season campaigns. Meanwhile, “Scream 3” turns its franchise into a farce in an attempt to poke fun at the horror genre.

Posey’s part is meant to be a comedic foil to Cox’s severely harsh bangs, but the actor creates such a funny character that (spoiler alert) her death is the only emotionally bitter one of the film. She dies while trapped in a two-way mirror that shows Cox staring into the soul of her fictional self. The theme, while so over the top, serves as a way of killing off Weathers while keeping Cox intact. Posey’s part may be gone, but Cox’s will live forever. (See: “Scream 4.”)

While an MTV Movie Award for Best Comedic Performance nomination was the only accolade Posey received for the role, it was for what she was hired to do: Deliver a laugh-out-loud comedic performance in what was a nominally scary movie. However, Posey predicted her own fate and went home empty-handed.

Stacy Lambe is an associate editor for Out magazine and writer for VH1. He once sent Hillary Clinton a text. She did not text back.