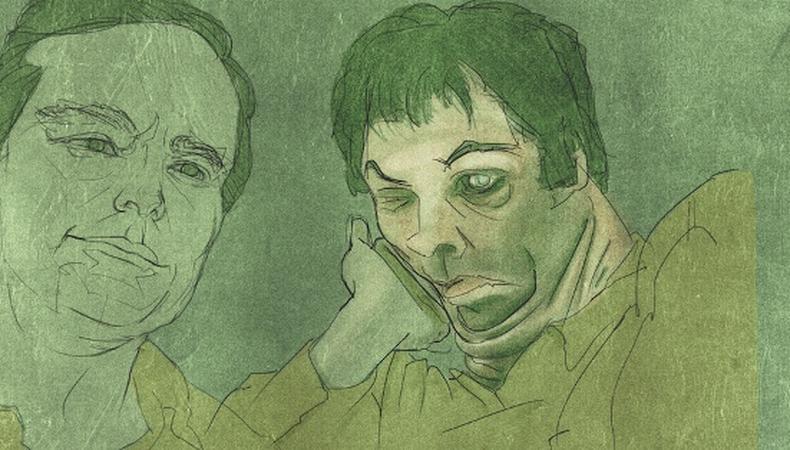 We hear farmer Edgar before we see him, in a lockdown shot of a little farmhouse with an old pickup out front and the sky above choked with stars. Inside the house, Edgar chastises his mousy wife, comparing her unfavorably to his truck. Outside the house, an alien spacecraft makes a slow, fiery beeline for the vehicle Edgar so loves. The impact drives Edgar outside, scattergun in hand and Heston on his tongue: “You can have my gun when you pry it from my cold, dead fingers” he tells his alien “bug” visitor a moment before being yanked down, hollowed out, and worn for the rest of “Men in Black” like a suit that’s several sizes too small.

When D’Onofrio emerges from the crater, everything about him is different. Granted, he’s been blessed with a makeup department headed by Rick Baker (who won the Oscar). But face paint and prosthetics are mere window dressing on a deeply imagined and exhilarating physical performance. There’s the walk—a frustrated lumber, as if the arms and legs are working against each other instead of together (to find this awkward movement, D’Onofrio experimented with ankle and knee braces). He stomps and barges, the arms jerk, flail, smash. Even the fingers seem to have developed minds of their own. There’s a sudden alarming elasticity to the actor’s face; the head is cocked at grotesque angles, deflating the chin into 5-o’clock folds that droop about the neck like unwashed rags. The mouth snaps, the lips smack. And then there’s the voice, a loose, lower-register, pissed-off snarl. Edgar, or rather the space cockroach wearing Edgar’s skin, groans, growls, and generally complains—with good reason.

Though Edgar’s story takes a back seat to the “new partner” arc given to movie stars Tommy Lee Jones and Will Smith, it provides the best moments of “Men in Black.” The film only truly sizzles when D’Onofrio’s on that screen. It also proves that expensive digital imagery can’t hold a candle to a great actor with a bold vision.

At a film festival the year after “Men in Black” premiered, I got to spend some time with D’Onofrio and learned that at least two of his performances had been touched by fate. The first was the actor’s very first theatrical role, in Stanley Kubrick’s Vietnam War diptych “Full Metal Jacket,” as pathetic “fat-body” Pvt. Leonard “Gomer Pyle.” Shooting for more than a year to satisfy Kubrick’s vision, D’Onofrio passed the time watching Lon Chaney films. On the eve of shooting Pyle’s big bloody suicide scene, Kubrick asked D’Onofrio if he understood the level of emotional intensity the scene called for. “It’s got to be big,” Kubrick said. “Lon Chaney big.” Pure chance. But you can clearly see the “Man of a Thousand Faces” in Pyle’s demented fubar grin. The second time fate intervened was on “Men in Black.” Around the time D’Onofrio was cast he was listening to interviews with the late John Huston. Huston embodied evil itself as Faye Dunaway’s father and, er, something else, in “Chinatown,” and the marble-mouthed drawl that drips from Edgar’s alien-inhabited orifice is pure Huston.

But what is most remarkable about D’Onofrio’s performance in “MIB” is the simple idea behind it—and how it was only discovered because the actor was curious enough to investigate an inchoate character. When D’Onofrio was cast, the script was still in flux (surprise!) and there wasn’t much known about what he’d been hired to play. So he went to the art department and asked to see the conceptual art. His character—the bug—was huge, towering. This was news. This was inspiration. And D’Onofrio now had a premise for his performance: discomfort.

This giant bug would be none too pleased about being stuck in the inadequate confines of a silly biped body. You can see this discomfort—and the frustration that comes with it—grow over the course of the film: An alien becoming increasingly intolerant of its limiting human trappings until this farmer’s body becomes something to be used and discarded. After all, it’s just a cheap suit.

Mike Harvkey writes for Nylon, Trunk, Publishers Weekly, and other magazines. His novel, “In the Course of Human Events,” comes out April 2014.