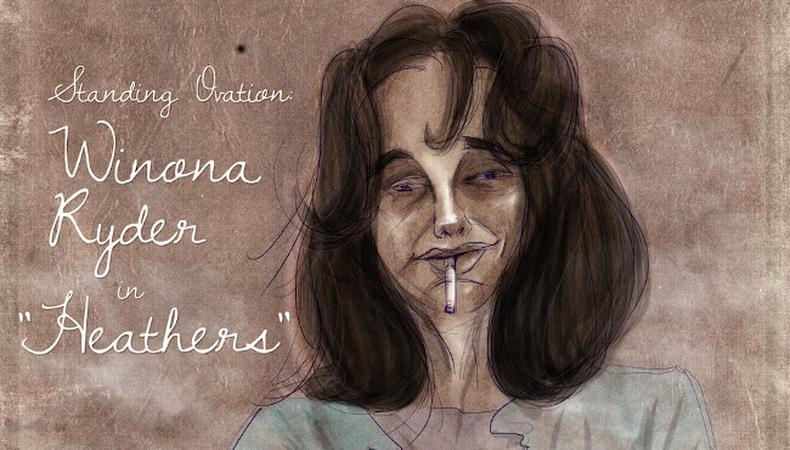 1989 was a good year for Winona Ryder. As opposed to, say, 1999 when Angelina Jolie stole her thunder in “Girl, Interrupted”; or 2002, when she shoplifted from Saks and all she got was a lousy “Free Winona” T-shirt; or 2010, when Natalie Portman became everyone’s favorite Oscar darling for her work in “Black Swan” while Ryder was cast as “the old ballerina.”

After playing the token high school goth under swathes of black eyeliner and velveteen dresses, Ryder starred as one of the most popular girls at Westerburg High in Michael Lehmann’s “Heathers.” The fresh-faced teen played raven-haired Veronica Sawyer, who floats amongst a sea of three fair princesses named Heather, differentiated only by their contrasting outfits and degrees of bitchiness. Veronica comes complete with a nerdy ex-BFF named Betty, a barbarian horde of frat and jock classmates, WASPy parental units, and a Nicholson-esque boyfriend named J.D. (Christian Slater) with a penchant for arranging murder-suicides.

“Heathers” begins with a warm welcome to Veronica’s diary, which offers a play-by-play insight into the hell of a teenage girl. And Ryder lends just the appropriate amount of biting sarcasm and wide eye-rolling to convey the sense of timeless teen angst—a difficult task that her fellow ’80s ingénue peers would have struggled with, no doubt. For Ryder, it was a flawless transition.

Veronica isn’t coy about hiding her hatred for frenemy Heather Chandler, convincing us along the way to loathe Heather C. just as much. What teenage girl doesn’t have that pretty-but-evil friend who simultaneously induces awe, anger, and nausea? When J.D. and Veronica poison the shallow high school princess, the audience is shocked but thrilled—hey, we hated Heather C., too! The empathy Ryder elicits allows her to bring the audience along for her blinded-by-hormones descent into murderous madness. But as vengeance gives way to terror as the entire school becomes consumed by murder-suicides, Veronica stops having quite as much fun, and her relationship with the maniacal J.D. literally explodes.

Long before Alicia Silverstone uttered “As if!” or Lacey Chabert tried to make “fetch” happen, Ryder slapped her friends across the face, dropped multiple F-bombs, faked a couple of suicides, and made it home in one piece after hitting up a college kegger and having a make-out session in the backyard. Her performance is unapologetic and she still comes out looking like a million bucks. Veronica Sawyer gave Ryder the opportunity to stand out against the poseur dolls of the “Brat Pack,” those ersatz Molly Ringwald knockoffs who brought incredulous teen naiveté to their roles. They made out and had feelings while Ryder engaged in an l’amour fou with Christian Slater (a worthy opponent), and spit him out like no other.

At the film’s end, Veronica has survived J.D. and a bomb, and lights a celebratory cigarette. Even covered in ash and under a fright wig, Ryder’s confident swagger is undiminished; the actor is unafraid to embrace ugliness and grit. As she smokes, Veronica boldly announces to one of the Heathers (played by Shannen Doherty), “Heather, my love, there’s a new sheriff in town,” steals her scrunchie, and invites the school’s token fat kid to rent a movie and eat popcorn.

Twenty-five years after “Heathers” was unleashed on audiences, Ryder still reigns supreme as the darkest star to ever wear the crown of hormoaning and teenage torment.

Veronika Daddona worked as a casting associate for five years, casting such projects as the J.J. Abrams series “Person of Interest” and Michael Bay’s upcoming “Teenage Mutant Ninja Turtles.” She is currently a film casting editor with Backstage.

Veronika Claghorn
Veronika Claghorn has been a part of the Backstage team for over five years. Prior to working with us, she worked in extras casting for large budget film and TV projects like Paramount’s “Teenage Mutant Ninja Turtles” (alongside fellow Backstage staffer, Eli Cornell) and Christopher Nolan’s “The Dark Knight Rises.” She got her start in Philadelphia casting for M. Night Shyamalan and producing for A&E. She is now based in Atlanta and continues to freelance cast principal roles in commercials and independent films.
END_OF_DOCUMENT_TOKEN_TO_BE_REPLACED