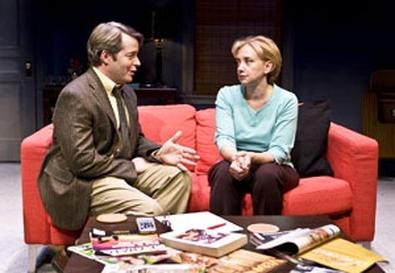 The impressive track record of playwright-director Kenneth Lonergan adds to the disappointment. His previous plays "This Is Our Youth," "Lobby Hero," and "The Waverly Gallery," as well as his Oscar-nominated screenplay for "You Can Count on Me," were incisive, detailed portraits of endearing everyday people dealing with believable situations. This script meanders, and the crises faced by its characters come across as either mundane or forced. In addition, Lonergan should have turned the staging reins over to another director. The pacing is glacial, and there are several blocking problems on Derek McLane's cluttered set.

Broderick repeats his hangdog, lifeless limning from "The Philanthropist," only this time his character's subject is astronomy rather than the history of words. Mark Williams has given up his youthful ambition of becoming a full-time stargazer and teaches the subject to diffident amateurs in the basement of the soon-to-be-renovated Hayden Planetarium. Predictably bored with his wife (played by Lonergan's real-life spouse, J. Smith-Cameron, in a vibrant performance) and son (an offstage voice provided by Kieran Culkin), Mark launches an affair with Angela, a pretty young Hispanic woman training to be a nurse (Oscar nominee Catalina Sandino Moreno in a shaky stage debut).

The sad-sack Mark can't even work up any demonstrable enthusiasm for the bubbly Angela and fails to register any emotion until Lonergan delivers an unexpected tragedy late in the long evening. Playwright, star, and character don't show any passion. Mark says he loves astronomy and opera, but you wouldn't believe it based on Broderick's blankness. The only beauty or excitement is conveyed by Austin Switser's projections of the heavens and some recordings of operatic arias. There are also scenes with one of Angela's elderly patients (Merwin Goldsmith) and his estranged daughter (Missy Yager), but these two feel as if they wandered in from another play.

In one of the few segments to strike a spark, an obnoxious student (played with the right degree of smug earnestness by Culkin) ruthlessly critiques Mark's well-meaning but unengaging teaching style. Unfortunately, he could be commenting on Broderick's performance and the entire enterprise.