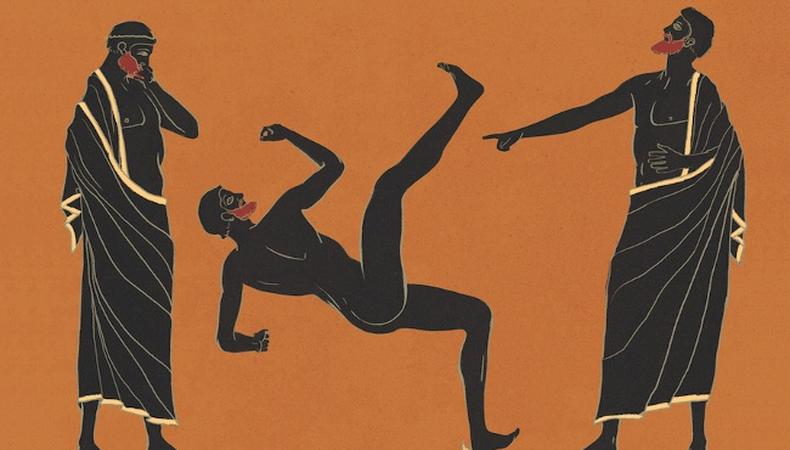 I’m not sure who invented comedy, but it is safe to say someone slipped on a banana peel at least 3,000 years ago. The earliest plays we value come from the Greeks. The Greeks loved tragedy. Sophocles, Euripides, and Aeschylus were wrestling with ideas that normally dwell in the realm of religion. What is a man? What is sin? What is redemption?

Aristophanes was sitting on the other side of the aisle saying, “So what? Who wants to get laid?” Comedy was born.

The ancient Greeks were very good at asking questions and coming up with answers. They were so good at it, we call their brief moment in the sun the golden age.

One of the architects of the golden age was the prize pupil of Plato, Aristotle. Aristotle wrote brilliantly on almost every subject, from physics to metaphysics. He wrote about the art of comedy. What makes Aristotle’s observations so important is that they still are true. That’s saying something.

Aristotle combined his vision of drama and comedy with his observations about human nature, which makes them doubly exciting. He said that every emotion experienced by man is on a sliding scale: passion, appetite, anger.

The man who stands at the center of the scale is the subject of tragedy. Oedipus, Orestes, and Electra are no different from Hamlet, Macbeth, and King Lear. They all are fighting to recover balance while their worlds shift and crumble. They are the subjects of tragedy.

Whether you are writing or doing improvisation, a lot of mileage is to be gained by riding the edge. Find the themes that depict balance in a piece. See if your character is emotionally limited in a certain area. If so, that can be a source of comedy, according to Aristotle.

One of the most brilliant ideas of Aristotle is the notion of something he called “techne.” We derive the word “technique” from this idea. It describes the skills and tools we use to move an audience. There are many facets to this concept. The one that relates to comedy is startling. Aristotle said that when the brain understands that something it has just heard is true, “techne” occurs. A circuit closes. The connection creates a small burst of pleasure.

This underscores one of the Ten Commandments of comedy: If there is no truth—we don’t laugh.

Stephen Tobolowsky is an actor, author of "The Dangerous Animals Club," and teaches improvisation for Kalmenson and Kalmenson.