'39 Steps' to Close in January 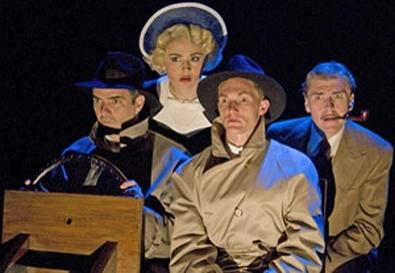 The play, adapted from Hitchcock's 1935 film—which itself was adapted from John Buchan's 1915 novel—premiered in 2007 at the Huntington Theatre Company in Boston. It began Broadway previews on Jan. 4, 2008, at Roundabout Theatre Company's American Airlines Theatre and officially opened there Jan. 15. The show migrated to the Cort Theatre in April of that year, then the Helen Hayes Theatre in January 2009. Its Broadway run of 771 performances—the longest for a play on the Main Stem in seven years—ended Jan. 10, 2010. The Off-Broadway production began previews in March at New World Stages, where it will have played 23 previews and 318 performances by the end of its run.


"The 39 Steps" features four actors playing dozens of characters in a re-creation of Hitchcock's thriller. It was adapted for the stage by Patrick Barlow.