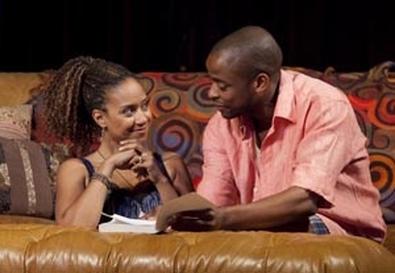 Photo Source: Richard Termine
I can't call Lydia R. Diamond's "Stick Fly" a good play, not with its penchant for overripe secrets, melodramatic revelations, and lazy plotting. On the other hand, I have to admit that I found it entertaining, thanks to the rarely explored milieu (an old-moneyed African-American family), spiky discussions of race and class, and first-rate acting from a top-notch cast. Whatever its shortcomings, it's an exuberant work that will likely prove an audience pleaser.

The LeVay clan is gathering at the family's summer home on Martha's Vineyard for a weekend. Patriarch Joe, a successful neurosurgeon, wants things his way and rules with a brusque but loving hand. Older son Harold (nicknamed Flip), a cosmetic surgeon and terminal ladies' man, is bringing his newest girlfriend, Kimber, who is rich, privileged, and very white but studies race dynamics in inner-city schools. Younger son Kent, a sensitive, struggling writer, has in tow his not-of-our-class fiancée, Taylor, a scarily intelligent and articulate entomologist with self-esteem and abandonment issues, there to meet the folks for the first time. Also present is the lovely Cheryl, about to enter college but first pinch-hitting for her mother, the LeVays' longtime domestic, who is battling cancer. Mysteriously and uncharacteristically absent is Mrs. LeVay, a multidisciplinary university professor, though Joe keeps promising that she'll arrive shortly.

The dynamics of this highly competitive group are unsurprising. Flip, who has made life choices to please his father, is Joe's favorite, while Kent, whose career Joe dismisses as not being real work, is his mama's boy, and the brothers' sibling rivalry is rooted in those roles. Taylor is intimidated by all the wealth and privilege and impatient with Joe's and Flip's alpha-male sensibilities and acts out. She also clashes furiously over issues of race with Kimber, who calmly refuses to play the role of other, and infuriates Cheryl, because she's uncomfortable with having someone wait on her. Positions are jockeyed for, relationships threatened, and a long-buried secret threatens to bring everything crashing down.

Director Kenny Leon embraces the play's messiness wholeheartedly and gets great work from his actors. If the women fare a bit better than the men, that's because their roles are more fully written. Tracie Thoms is a whirlwind of energy as Taylor, expertly mixing intelligence with insecurity and particularly successful in Taylor's tussles with Kimber. Rosie Benton gives the white girl a calm confidence in herself and her place in the world and makes Kimber's love for Flip palpable, despite the fact that Diamond never convincingly dramatizes why this strong woman would fall for such a macho, emotion-disdaining type. Condola Rashad is intensely present and blessed with the kind of luminous eyes that can penetrate to the back of the balcony, and she uses them to display the myriad confusing feelings roiling the shy Cheryl's soul.

The imposing Mekhi Phifer finds an intriguing restlessness and tantalizing traces of self-contempt in Flip and has good chemistry with Benton. Dulé Hill dishes out the boyish charm as Kent but mixes it with a refreshing combination of vulnerability and spine, proving that there's more than one way to be a man. Ruben Santiago-Hudson, as Joe, is saddled with the least-dimensional role, but he compensates with a detailed physicality and sharp focus that tell us as much, if not more, than the writing does.

It's a critic's job to figure out what the artists wanted to do and then analyze whether or not they succeeded and why. If Diamond's goal was a lively potboiler that would bring serious ideas to the masses, then mission pretty much accomplished.