'Stoker' Gets Heated Even As its Characters Stay Icy 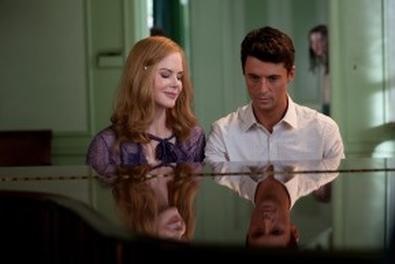 Like any good thriller, “Stoker” is something of a shell game, recasting what had originally seemed to be ordinary objects—wildflowers, a man’s belt, a pair of heels, dark sunglasses—in a vastly different light by movie’s end. Those objects are endlessly fetishized by director Park Chan-wook in his English-language debut, along with the polished wood surfaces of the staid home of the Stoker family.

The staidness implied by cool mint walls and shiny baby grand is quickly disrupted on a subterranean level by the simultaneous death of the Stoker patriarch and the abrupt arrival of his long-traveling brother Charlie (Matthew Goode), whose presence is at first greeted with resentment by niece India (Mia Wasikowska) and pleasure by widow Evie (Nicole Kidman). Like so much about “Stoker” the film, the Stoker family, however, is not what it first appears to be. Why is the presumably mourning Evie so eager to have Charlie stay at the house? Where did India learn to aim a pencil point with such deadly accuracy? And why is Charlie always wearing his brother’s too-big belt?

The great thrill of this glossy, sexy, pervy thriller is in recalling the clues dropped on the way, along with those lingering close-ups of material possessions that practically amount to commercials. The heated words here, the predilection (and talent) for hunting there, add up without us quite noticing until the links all click into place in an extended climax that reveals not only the ways in which Park and his cast have tricked us but the ways in which we have misread omen after omen, tricking ourselves in the process.

Park’s three leads do some daring, mostly silent work (the sound you will long remember from the movie is not a gunshot but a metronome) playing characters who are themselves role players. Kidman proves that she is in the midst of a career renaissance as the chilly redheaded Evie, trying to seduce to the strains of Nancy Sinatra and Lee Hazlewood or needlessly, awkwardly apologizing when she interrupts a compromising situation. But it’s the bond between uncle and niece that drives the movie. Goode and Wasikowska stare at each other for stretches of time with glazed eyes, each ready to outwait and possibly outwit the other. Their eventual partnership is both expected and utterly surprising in its particulars, as the secrets those belts, sunglasses, and shoes contained come spilling out in a quiet, glittering heap until the final credits roll.