Stopping the Escape From L.A. 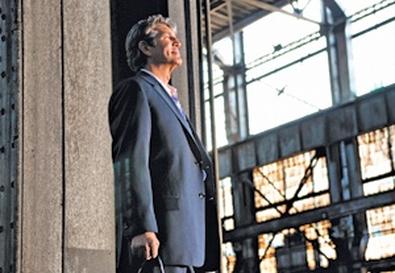 Photo Source: Crash
With its state and local governments hauling huge debts around and its heritage industry scattering to the wind, Los Angeles has looked unnervingly Detroit-like lately.

In such a climate, any good news is welcome. Folks who have been working to keep cameras rolling in Hollywood finally received some on March 31, when FilmL.A. reported that overall on-location shooting in the area had risen by 25 percent in 2010 from the same time last year. Los Angeles City Council member Paul Krekorian is among those who see hope on the horizon.

"It's been a horrendous drag on the economy of California and Los Angeles to be losing these productions," Krekorian said. "I'm thrilled that we're finally now starting to turn the corner and bring production back home where it belongs."

The root cause of California's woes is, by most accounts, the production tax incentives now offered by more than 40 states in the union to lure film crews. As states such as New Mexico, Michigan, and Massachusetts began funneling taxpayer money to producers, Southern California lawmakers found their efforts to pass similar legislation stymied by their NoCal colleagues. The standoff finally broke last year.

In the midst of an unprecedented budget crisis, Gov. Arnold Schwarzenegger signed into law a proposal to create the state's first tax-incentive program. Krekorian, then assistant majority leader of the state Senate, helped shepherd the bill, which offers a 20 percent tax credit to films with budgets of $1 million to $75 million, television movies, and new basic-cable TV series. It also offers a 25 percent credit to some TV series that previously filmed in other states.

"Throughout my three years as chairman of the Select Committee on the Preservation of California's Entertainment Industry, I would constantly remind my colleagues that had we enacted these incentives 10 years ago, we wouldn't be facing the same depth of a budget crisis that we are now," Krekorian said. "We would have 10 years' increased revenues from increased economic activity and more jobs."

He cited "the immense popularity of the incentive program" as evidence that the state may finally be turning the corner, luring back some of the economic activity that has been lost to runaway production in recent years. The program has indeed been popular—so popular that it's now broke. By the end of January, its entire 2010 budget had been spoken for. That means no projects shot in California will be eligible for tax incentives again until 2011.

Krekorian would like to see the program expanded but concedes that the time to push for that may be in the future. In the present, he's focused on other tactics, such as the possible creation of a Los Angeles film commission, now being weighed by the City Council. Also in the pipeline is a public-awareness campaign along the lines of New York's "Made in NY" program. According to the Los Angeles Times, FilmL.A. will devote $25,000 to help get it off the ground.

"It's important for people to understand that if there's a production going on here in Los Angeles, that's putting money into our local economy that everyone benefits from," Krekorian said. "So I hope that that becomes a successful campaign in getting that message out."

Getting the message out has become a personal passion for cinematographer Ed Gutentag, who last year founded the website www.shootmoviesincalifornia
.com. The site grew out of a Facebook group that Gutentag started in October after he found himself mulling a move to New Mexico, where a fair chunk of California's production work has migrated. He claims that the group now counts more than 14,000 members.

According to Gutentag, it is crucial that Angelenos who don't work in entertainment understand the importance of the industry to their own livelihoods—even when that industry is an inconvenience. "We need to basically change the culture of thinking here," he said. "When you see trucks in your neighborhood, don't get annoyed, because that's bringing jobs."

Many of those jobs are in front of the camera, and while fewer jobs in California means more jobs elsewhere, not all of those jobs are created equal. In film, for instance, the Screen Actors Guild covers background actors only on shoots in Hawaii, Las Vegas, parts of California, and within 300 miles of New York City.

But Ron Morgan, president of the American Federation of Television and Radio Artists' Los Angeles local, believes that his members have reason to be optimistic. As evidence, he cited the fact that 60 of the 83 pilots being shot this year for prime-time network scripted shows are being shot in L.A. Morgan pointed out he's happy to see work going to his "brothers and sisters" in other AFTRA locals, but he believes, especially when it comes to TV, production will stay concentrated in the major hubs.

"The talent pool needed for this is really large in Los Angeles," he said. "The next biggest one is New York. If you go to New Mexico, you're going to hire your three or four top stars who are going to be series regulars [in L.A.]. You won't fly in as many guest stars. You'll try to hire from your talent pool in New Mexico, but at some point that pool dries up and you have to go back to the major market to get your talent."

That talent may end up being the resource that keeps the entertainment business from decentralizing completely. Morgan admitted that with so many colleges and acting schools churning out young actors across the country, other areas have become competitive—but not so competitive that they could hope to overtake the industry's capitals.

"There is a talent pool that's being built out there," he said. "But those people's desire, generally, is to go to Hollywood and be a star or to go to New York and be a star. They're not saying, 'I'd like to stay in Rhode Island and be a star.' "