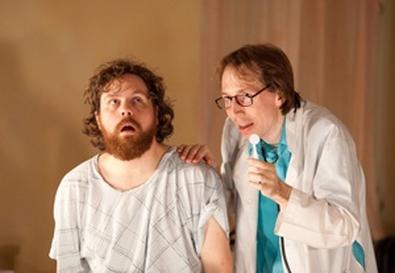 Photo Source: Nick Mann
The three members of the Nonsense Company try awfully hard to imbue this multilayered riff on Act 3, Scene 6 of "King Lear" with a sense of anarchic fun. Unfortunately, the play's freewheeling form is something of a Trojan horse, hiding a core of donnish theater-geek in-jokes; it's as if the Firesign Theatre (whom I never understood either) had weighed down one of its druggy surrealist sketches with ponderous references to the Oresteia and Aristotle's theory of catharsis. It's erudite, intelligently acted, highly theatrical, and it made me want to scream.

The setting is an abandoned school in a vaguely defined war zone. Three schoolchildren, trapped inside, have grown to adulthood with little to do but perform "King Lear" over and over again. The play primarily focuses on those moments in Act 3 when Lear acts out a criminal trial of Goneril and Regan, and Gloucester has his eyes unceremoniously put out by Cornwall, though "focus" is probably an inapt word. We also get some discourse on the differences between the Folio and Quarto versions of "Lear," much fiddling with microphones and headsets, a musical interlude featuring miniature cymbals and toy xylophones, some fairly amusing low-rent puppetry, an extended takeoff on the "Hey Ho" song from "Twelfth Night," a bald guy in a loincloth dumping mucky water into an empty fish tank, and oh, so much more.

The Nonsense Company comprises Rick Burkhardt, Andy Gricevich, and Ryan Higgins. All three collaborated on the script, with Burkhardt and Gricevich directing. In a sense, the troupe's approach does recall the hermetic, stream-of-consciousness quality of children at play. Of course, children feel no obligation to make their freeform antics comprehensible to the observer—and neither, apparently, does the Nonsense Company.