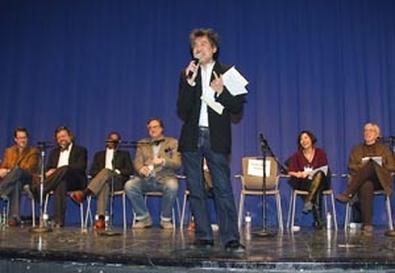 Photo Source: Bruce Alan Johnson
Jeremy Lin has a lot of fans in the theater.

The New York Knicks point guard was the talk of RepresentAsian: The Changing Face of Theatre, a roundtable discussion about diversity on New York City stages, presented by the Asian American Performers Action Coalition and Fordham University.

"I'm thinking about how easy it is to overlook somebody," said playwright David Henry Hwang, who moderated the panel of 18 notable agents, casting directors, actors, directors, artistic directors, and more at Fordham University's Pope Auditorium on Monday night. "It doesn't help anybody when we don't have equal access."

Access, not outcome, was the central issue of the evening, and the event coincided with the release of a study, performed by AAPAC, charting the representation of minority groups on Broadway and New York's 16 most prominent non-profit theaters from the 2006/07 -2010/11 theater seasons.

Asian Americans were the only ethnic group to decline in representation over that time, from landing 3 percent of roles in 2006-07 to 2 percent in 2010-11. African Americans saw a spike in the amount of parts from 9 percent to 14 percent over the same period, and Latino performers achieved smaller growth, from 2 to 3 percent. Not surprisingly, Caucasians are the only ethnicity to over-represent, with 80 percent of roles on Broadway and non-profits going to white/non-Hispanic actors. Only 61.6 percent of the tri-state population identifies as white.

"It is truly about access," said panelist Mary McColl, executive director of Actors' Equity. "Making sure the right people get into the audition room because a great audition can change what you see on stage."

Nancy Piccione, casting director for the Manhattan Theatre Club, also views granting admission as her role in the process. "My job as a casting director is to bring actors of all races and ethnicities into the audition room," she said.

However, there are many hurdles that minorities must overcome beyond getting in the room. Playwright Douglas Carter Beane ("Sister Act," "Lysistrata Jones") revealed that many directors and writers are extremely close-minded when it comes to casting non-traditionally. Beane encouraged playwrights to create opportunities for all actors, particularly in world premiere productions, as the original cast often inadvertently becomes the template for all future stagings.

"What happens in that room when you're not there is unbelievable," Beane explained. "I encourage other playwrights, because god, we have so much power, to keep an open mind."

Even for non-traditional casting, certain groups can be overlooked. According to the study, 9 percent of all available roles on New York stages were cast colorblindly, and of those available roles, Asian American actors landed 1.2 percent in the 2010-2011 theater season. African Americans led with 6.1 percent and Latino performers played 2.7 percent of those parts in the same period.

"In this world that we're creating, we cannot view race as so primary that it overwhelms the way that we suspend our disbelief when we go to the theater," argued Oskar Eustis, artistic director of The Public Theater.

The diversity of the theatergoing audience was another topic, raised by producer Nelle Nugent ("Stick Fly," "Ghetto Klown"). "The audience is critical to opening this up," said Nugent, remarking that audiences are predominantly white. However, producer Stephen Byrd has another idea.

"If you build a field, they will come," said Byrd, who produced Tennessee Williams' "Cat on a Hot Tin Roof" on Broadway with a black cast and is bringing Williams' "Streetcar Named Desire," with a multiracial cast, to Broadway this Spring.

"These are all stories that are relevant to anyone," Byrd said backstage. "Who doesn't know, white or black, a dysfunctional family?"

Casting director Stephanie Klapper said she has found more success casting non-traditionally for regional theaters, and according to the study, Asian American actors were more likely to be cast in Shakespeare or musicals. "Both of those things require skill," Beane pointed out, and Byrd argued that non-traditional casting works better for contemporary plays.

"It's not about just casting Asians for Asians' sake," said actor Pun Bandhu, who currently appears in "Wit" on Broadway. "It's about casting the best actor for the role."

However, Asian Americans haven't made as much noise about the representation issue as African Americans, and except for Hwang, Asian actors don't have the same prominent playwrights, such as Lorraine Hansberry and August Wilson, to write the parts for them.

Hollywood is another issue, as many ethnic actors have made the pilgrimage out west because the opportunities can be greater. "It seems like in the theater in the last five years, we've more or less laid off actors in general," said casting director Tara Rubin, adding that projects in recent years tend to have smaller casts for financial reasons. "People on the margins are the first to fall off."

While there is no one solution to the problem, panelists suggested putting more minorities on non-profit theater boards, nurturing new playwrights, and raising money.

Or everyone can just board the Linsanity band wagon.

"Does anyone know when the next Knicks game is?" asked Hwang, wrapping up the almost 3-hour discussion. "We'll do that and we'll also get more Asians into the theater."