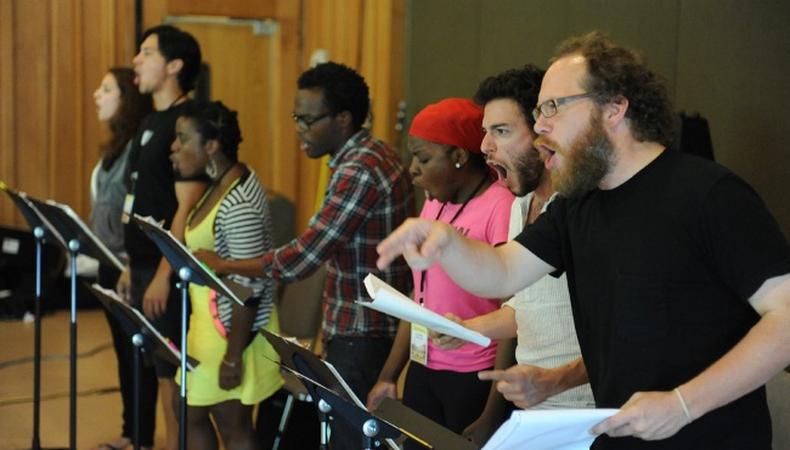 The film festival may get all the attention, but the Sundance Institute wields a secret weapon when it comes to theater: its yearly Theatre Lab.

Even casual fans of the theater will recognize some of the shows that have come through the Lab. The past six months alone have seen several alums burst onto the scene, from the Broadway hit “A Gentleman’s Guide to Love and Murder” to Off-Broadway’s “Fun Home” and the upcoming “When We Were Young and Unafraid,” starring Cherry Jones.

“These projects really represent what a producing theater would program in a season if they didn’t have to worry about an audience—which we don’t have to worry about,” says producing director Christopher Hibma. “We can choose risky projects. These stories have to be unique, and they have to be well-crafted. It’s OK if it’s a big ol’ mess, but the voice has to be interesting.”

Located in Park City, Utah (home of the film festival, as well), for three weeks each summer, the Labs have become a fertile breeding ground for the next big things on stage. Hibma describes the experience as a “rigorous theater camp,” with low stakes and high levels of concentration. “Robert Redford has really created an oasis for artists to come and play in a big sandbox,” he says. “And that’s really rare these days.”

Part of that oasis is having shows rehearse every other day, allowing the playwrights a free day in which to brainstorm, rewrite, or simply jump on a ski lift. That doesn’t hold for the actors invited to the Lab each year, however; often cast in two projects at once, the performers usually rehearse six days a week.

Casting director Tara Rubin helps assemble what Hibma refers to as the Lab’s “company,” holding both open calls and reaching out directly to performers (actors are also invited to submit headshots and résumés via snail mail). Genuinely part of the collaborative, creative process, Hibma says that actors often “leave the Sundance experience feeling, ‘Oh, this is why I got into the theater!’ ”

He points to last year’s production, Qui Nguyen’s “War Is F**king Awesome,” which was submitted with a white, Britney Spears–type lead character. “We, for some reason, could not find an actor who could do that,” Hibma says. Ultimately, Uzo Aduba (“Orange Is the New Black”) was cast instead, transforming the play in the process. “The character changed on a dime from a white, Britney Spears type to a black slave girl who is destined to fight in every American war,” Hibma says. “It’s just an example of how an actor can change the trajectory of a play without even knowing it.”

After two weeks of work, the final week of the Lab is spent giving “informal presentations.” Closed to the public and the industry as a whole—“Artistic directors aren’t coming, shopping for plays,” Hibma says—two or three invited creative advisors watch the performances and then have an informal meeting with the creative teams. “It’s not about Sundance saying, ‘We feel it’s too short or too funny or not funny enough,’ ” Hibma says. “We want to address the questions the artist still has about [his or her] work. They come with questions they still have. ‘Does that character mean anything to you? When did you drop out?’ It really serves their process, primarily. And then we have a big party and go home!”

In a world that too often sees revivals of tried-and-true works, Hibma understands the singular place the Theatre Lab holds. “We want there to continually be a new infusion of work into the theatrical canon,” he says. “Philip [Himberg, artistic director of the Sundance Institute’s Theatre Program] likes to talk about, if you go into a bookstore, the classics section is jam-packed and the new section has one book. That’s a lot of pressure to put on that play! We just try to put as many new books as possible on that table so you can pick and choose.”