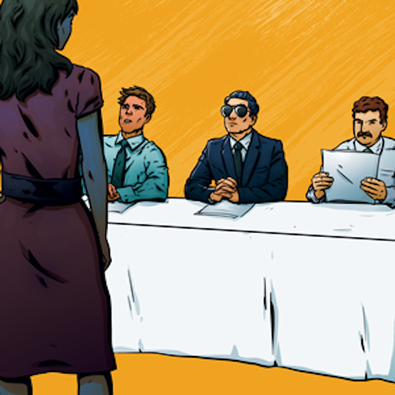 “Those other actresses were falling apart. A lot of them really couldn’t cope with the auditioning process, and I could. That’s why I got the job, because I’m good at auditioning.”

—Lisa Kudrow on the casting process for “Friends”

There are three things I know about this industry that no one can dispute: Nepotism works, Lena Dunham needs to get dressed, and actors who can’t audition have no future.

As an agent, I’m not qualified to teach you the art of auditioning. That’s not my field. There are plenty of great teachers out there, such as Brian Reise and Annie Grindlay, who can help you learn that skill. But I do have a degree in Actor Neurosis, so I can speak with authority about the mental process that has to occur before and after an audition.

Before the Audition
First, let’s talk about attitude. You have to walk into that room prepared, without a care in the world. Auditioning is an opportunity to act, and that’s the one thing you love most, right? So don’t worry about booking the job or getting a callback. Just focus on giving a good performance. If you can do that, you’re already halfway home.

A lot of actors get thrown when they arrive at the casting director’s office and find 10 other actors who look just like them. It’s like entering a weird cloning experiment from a Philip K. Dick novel. Or on the flip side, actors are often stunned when everyone else is 10 years younger or a different ethnicity. My question is, Who cares? None of those people are your concern. The audition is about you, not them. So keep your focus and don’t allow made-up anxiety to get in your way.

Here’s something else you need to know. I don’t expect clients to book when I send them out on auditions. Don’t get me wrong; I haven’t lost my mind. Bookings are a good thing. They help pay for all those toys I love. But auditions aren’t always about getting hired. I just want you to do well so the casting director will become a fan and start bringing you in on a regular basis. The more that happens, the more likely you are to become a working actor.

Remember, casting directors want you to do a good job. They want to be impressed. If an actor nails an audition, they’re that much closer to being done with the part.

Here’s a great quote from acting coach Ian Tucker: “They are dying for you to blow them away. They’re on your side. What do you think—they want to go through hundreds of people and settle? No. Just do what you do. Either you’re right for the part or you’re not—let them decide.”

After the Audition
When you’re done, it’s perfectly acceptable to ask if the casting director has any notes. If the answer is yes, listen carefully and make the adjustment. If the answer is no, say “Thank you” and get the hell out. The audition is over. This is not the time to make small talk or hand out fliers for your next play.

On the way home, it’s a good idea to go over the performance in your head. Congratulate yourself on what you did right, and make a note of what you can do better if there’s a callback. But don’t obsess, and for God’s sake, don’t beat yourself up for tiny mistakes no one noticed. Like I said, the audition is over.

The sad truth about the business of acting is that you will spend more time looking for work than actually working. That’s why it’s so important for actors to enjoy their auditions. And that process begins when you first hear about the audition, not the moment you say your first line.