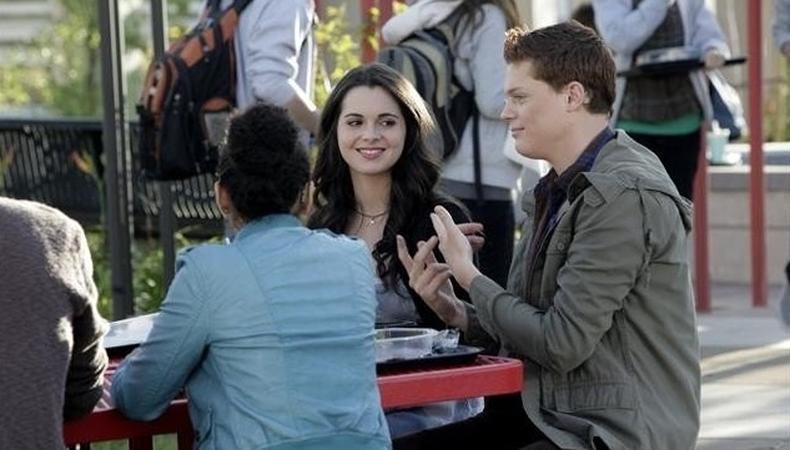 The television show "Switched At Birth" is already known for having entire scenes in American Sign Language (ASL). But on March 4, the series will make history with an episode entirely in ASL. The episode deals with a student protest at Carlton School for the Deaf, which both Daphne (Katie Leclerc) and Bay (Vanessa Marano), two teenagers who were switched at birth, attend. (Daphne is deaf, and Bay transferred as part of a pilot program for hearing students.)

“It’s risky to do an episode that’s going to be completely closed captioned,” says Marano. “A big fear with the show in general was how an audience was going to respond to a scene that was entirely in captions and the audience has responded well, which is great. My hope is that they prove to everybody that they are ready for this.”

We spoke with Marano and Sean Berdy, who plays Bay’s ex-boyfriend Emmett, often referred to as the “deaf James Dean,” on separate occasions about the groundbreaking episode. (Berdy's interview was conducted via e-mail.)

Was this episode shot differently than the way you normally shoot your episodes?
Vanessa Marano: Not totally differently because we do have a lot of ASL scenes in the show and we shot it with the sound being recorded and the dialogue being recorded, so it was shot pretty similarly. But the way that it was written and the amount of interpreters we had on set was different than how we usually shoot. And there was a lot more stage direction as well than in any usual episode, so actually we ended up shooting a lot more scenes in a day than typically. There were a lot more deaf characters in this episode—we have interpreters on set for the deaf actors so that they can communicate with the directors efficiently and nothing gets lost in translation. I would say there were like 12 interpreters on set at a time as opposed to one. It was really interesting too because it was a lot of different conversations happening simultaneously.

Sean Berdy: The show always has a lot of ASL scenes, but this episode was different because every single cast member had to learn and practice their ASL and continuously tune up their skills. Every line was rehearsed, spoken, and shot in ASL. It was a shift and a change in the tides on set. I think everybody enjoyed it.

Vanessa, can you talk about how you learned ASL? Did you just learn what you needed for the show or did you take classes?
Marano: They provide what we call ASL masters—people who make sure that the sign language is accurate—and they teach us how to say our lines in ASL. I usually work once a week with one of our ASL masters to learn my lines.

How does the cast communicate with each other?
Marano: It depends on how accurately everybody can portray what they want to say. Obviously Katie Leclerc is fluent in sign language, so she doesn’t have trouble at all. I’ve gotten better at sign language, so I can carry on a little bit of a conversation in ASL. Ryan Lane, who plays Travis, is just the sweetest, most accommodating person and he really slows down his signing so that you are able to understand it, and he’ll talk if you still aren’t understanding it. And he makes an effort to read lips if you’re not actually knowing what to say in sign language. I think it’s a group effort. Obviously we use interpreters when we just can’t get across what we are trying to say, but what’s nice about it is that we are all trying to learn right now.

When you first signed on to do the show, did you know that ASL would be a part of it?
Marano: I knew there was a deaf character and that there were scenes in sign language. I didn’t know that I would have to be signing. That didn’t become apparent until about episode six and they were like, “By they way you’re going to start signing now,” and I was like, “What? OK!” I was not prepared for that.

How did you feel about that, as an actor?
Marano: Everyone likes a challenge. I think that everybody likes to be able to stretch their wings and learn something and add something to a character that they wouldn’t be doing in anything else, which is I can definitely say something for this show. Maybe after the show there will be more programs and films featuring American Sign Language and deaf characters as not just deaf characters, but they are just there like everyone is just there in everyday life. But up until this point, there would never be anything that I would have auditioned for that really I would have been using this skill set for, so all of a sudden I was introduced into this whole new way of portraying a character.