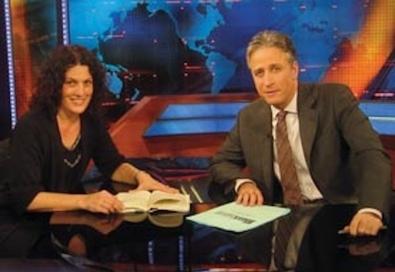 Photo Source: Daily Show
Behind every hardworking host is a harder-working talent booker. These are the people who put celebrities in morning television's hot seats and music in late-night. They are the unsung heroes of guest-driven television, with a task that is alternately akin to herding cats or beating the bushes for snakes. They wrangle scandal-plagued celebrities, newsworthy citizens and reticent politicians. And in a medium that lives and dies on being first --and best -- they are the rainmakers.

Victor has fought the booking wars as a producer on talk shows hosted by Maury Povich, Jenny Jones and Montel Williams. At "Today," where he oversees the booking unit as well as the show's third hour, his guests have included the world's tallest man and the "hiccup girl." It might seem that being the top-rated morning show would grease the skids with potential bookings. But, he says, "It just puts more pressure on us."

He stresses the importance of that "first phone call." Regarding the girl who could not get rid of her hiccups, he says, "We had her and her mom on a plane on their way to New York before anyone else even called them."

But with more media outlets willing to shell out cash to land overnight newsmakers and many websites paying for tips, everyday people thrust into the media spotlight are looking for a payday.

Says Victor: "People ask, 'Can I get money for my interview? Can I bring the entire family? Can I make a vacation out of this? Can I get tickets to Disney World?' Some requests are just crazy."

In today's hyper-competitive media environment, it's not just regular folks who come with outlandish requests. Celebrities have become more demanding as media opportunities -- and their handlers, publicists and crisis managers -- have proliferated.

"If it's an in-demand person who has gotten themselves in trouble and everyone is calling on them, they feel like they can dictate what is going to be asked or how things are going to be portrayed," says Lonner, who books celebrities for "Today" and has landed Lady Gaga for the concert series and is busy lining up guests for NBC's coverage of the Kentucky Derby.

"As recently as a few weeks ago I had a publicist say to me, 'We'll give you this person, but another show has agreed to let us edit the piece.' I was like, 'We'll see you later.' It was a really big booking, and I had to see it go somewhere else.

In the world of late-night TV, there are Dave fans and there are Jay fans, and never the twain shall meet. The infamous rivalry began when Jay Leno landed (Dave people would say "stole") the "Tonight Show" seat over David Letterman after Johnny Carson retired in 1992. Things heated up again during the Conan O'Brien debacle, with Letterman gleefully taking O'Brien's side.

But apparently, the divide extends to celebrity guests as well, even when they're out selling their latest project. "There are some people who will only do our show, which is wonderful," Rogers says. Pressed for names of Letterman's Hollywood fans, she demurs. "I will say this: Julia Roberts is very, very loyal to Dave. We love her."

Rogers has been with Letterman since his show was on NBC. She and her hard-working booking team have wrangled everyone from U2 (for an entire week), Paul McCartney (in his return to the Ed Sullivan Theater since playing there with The Beatles), Chilean miner Edison Pena, the last seven consecutive Super Bowl winners and Dustin Hoffman and Robert DeNiro together last December.

"I think what stands out with our show is that Dave is so good at interviewing people," says Rogers.

"It was strange and riveting," she says. "I don't mean strange in a bad way."

It may seem that "The View" -- presided over by Barbara Walters, the grand doyenne of the TV interview -- would have its pick of A-list guests.

But after 14 years, says Berman, who has been with the show since the first season in 1997, "it's not that much easier. It's still very competitive."

And though the show's opinionated hosts have invariably made "The View" a watercooler phenomenon, they can also be intimidating to celebrities who find themselves in the tabloid crosshairs. Billy Ray Cyrus abruptly canceled a long-planned February appearance in the wake of the explosive "GQ" interview in which he opened up about his troubled marriage and strained relationship with his daughter, Miley Cyrus.

Reports swirled that Miley pressured him to cancel "The View" interview. But Berman kept his cool, and two weeks later, "His people reached back out to us and we, of course, said yes and worked it out."

Kun came to "The Daily Show" to wrangle Washington power brokers just before 9/11. Stewart had been hosting since 1999, but had yet to emerge as the conscience of a generation.

Nearly a decade later, the host's interviews with politicians of all stripes have become a trademark of "Daily Show." But a few players remain elusive.

"George W. Bush and Dick Cheney," says Kun, "are two guys Jon would still love to have lengthy conversations with." Sarah Palin is another. None of them has accepted repeated invitations, and Stewart seemed to be just about the only one who didn't get an interview with the former president last fall when he was promoting his memoir "Decision Points." "I went after him hard," Kun says.

To put guests at ease, Stewart stops by the green room for a preshow chat. "Jon is always fair," she says. "He's going to ask some tough questions, but he's not going to get crazy."

"We joke that when there are 40 network producers and bookers on the ground, it's like hand-to-hand combat," says Mazzarelli, who spent several years at NBC News before jumping to CBS News, where he oversees the booking unit. "You find yourself plopped down in the middle of nowhere on a story where you don't have a ton of contacts, you're up for 24 hours, and if you do get people, then you have to convince them that, 'Oh, by the way, can you get up at four in the morning and do an interview?"

Competition has become more intense as the number of outlets, and the willingness to compensate for interviews, has proliferated. "When we find ourselves in that kind of escalating checkbook war, we have to say thanks but no thanks," he says. "It does get a little bit icky. But you have to be willing to draw the line because otherwise you can't call yourself a news organization."

Lazar is a veteran of the booking wars, having worked for news organizations and on topical programs, but when she joined "The Colbert Report" at the show's 2005 launch, she was greeted with a chorus of nos from prospective guests.

"People were very nervous about the Ali G experience," she says. When Stephen Colbert tried to employ his obtuse, right-wing TV newsman persona in interviews with Washington bigwigs, the bigwigs balked.

Except for attention-loving Congressmen --thus the "Better Know a District" segment, which plays the provinciality of small-town America for laughs -- was born. It has become a staple of Colbert's show and has spawned numerous spinoffs.

Seven seasons later, getting A-listers is not a problem. "My job has really changed from having to beg friends and family to do the show."

Whether it's Jennifer Aniston bowling with grapefruit, Gwyneth Paltrow performing classic rap with Fallon or Robert De Niro and Bradley Cooper playing Password, in slightly more than two years on the air "Late Night With Jimmy Fallon" has built a reputation as an alternative to the by-the-numbers late-night stop.

But not everyone is ready to throw caution to the wind and don '80s big hair (Paltrow) for a laugh. "We've had really big-name guests who have been like: 'You know, it's our first time on. Let's just try it straight,' " Granet-Bederman admits. "But they'll be booked for the second time and do a fun bit."

Who are some of those balky A-listers? "I can't tell you," she says. "People won't take my calls anymore."

The show is also known for an eclectic musical lineup featuring anyone from Itzhak Perlman to Snoop Dogg. Cohen, who spent nine years at "Billboard," says Fallon's status as a music aficionado (and fan) helps lure talent. They landed Bruce Springsteen after Fallon's spirited rendition of "Born to Run" at the Emmys. "That got Springsteen's ears up," Cohen says.

Neger, who has been with ABC News for nearly 30 years, was the first person to book Jack Hanna and Dr. Mehmet Oz; Hanna has become a television staple, and Dr. Oz is a daytime superstar.

She was also the first to book Charlie Sheen for what he promised would be an exclusive interview. But ABC was scooped by NBC, who got to Sheen after ABC's Andrea Canning had interviewed him at his Mulholland Drive home and managed to air theirs first. "That whole thing was a complete disaster from the beginning," Leuci says. "I was wondering if I should have stayed with him in that house and babysat him. But there was just no way. He was not manageable."

"Saturday Night Live" is not just another late-night stop. It demands a level of commitment – not to mention a sense of humor – unlike any other program on television.

This makes the bookers jobs easier and in many ways much harder.

"This is definitely more of a commitment and people understand that at the outset," says Cohen, who books the hosts. "This show is such a collaborative process. Everyone is working together to make a great show and make the host comfortable and look good. That's the goal."

Hosts are in rehearsals for the entire week leading up to Saturday's broadcast while musical acts need to be available for a three-day stretch. Cohen's recent bookings have included Zach Galifianakis, Helen Mirren and for the season finale Justin Timberlake, whose previous "SNL" appearances have produced viral sensations including "Dick in a Box" and the "Single Ladies" video parody.

"People are really excited to host 'Saturday Night Live,'" adds Cohen. "But at the same time there are people who we pursue who are nervous or it's not in their wheel house or they've never done live theater before."

The biggest obstacle to booking musical guests however is not the content of the performance rather it's scheduling around busy touring schedules. "As soon as we hear that [an artist] has an album coming out we have to be pretty on top of it to schedule them," says Siedlecki, who books both the hosts and the musical guests. "The fortunate thing is everybody gets very excited to do ["SNL"] and will usually move mountains to come on our show."