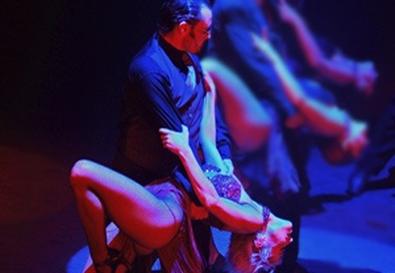 Billed as a tango musical, "Tanguera" is clearly a show for Broadway audiences. Unlike most of the tango revues and ballroom-dance spectaculars that have played the Great White Way recently, "Tanguera" feels more like a Broadway musical than a dance concert or plotless extravaganza. Though it contains no spoken dialogue and only three songs—all delivered as comments on rather than integral parts of the action—the plot-driven show is staged like musical theater and accompanied by a pit orchestra playing rousing Broadway-sounding tangos (arranged by musical director Lisandro Adrover) and original music (composed and arranged by Gerardo Gardelin, with lyrics by Eladia Blazquez).

The melodramatic story, by Diego Romay and Dolores Espeja, is the familiar tragic tale of a poor young woman who emigrates to a promising new land, falls in love with a dreamer, then is forced into prostitution by a dangerously jealous underworld figure. With its immigrant-experience theme, choreographed gang fights, and male ensembles performing European folk dance, "Tanguera" seems more inspired by "Ragtime," "West Side Story," and "Fiddler on the Roof" than by "Tango Argentino," "Burn the Floor," or even "Movin' Out."

Directed by Omar Pacheco and choreographed by Mora Godoy, the show conveys its story completely through dance. But instead of deriving her choreography from American vernacular dance traditions, Godoy draws from the visually striking, kinetically thrilling, and emotionally fierce physical vocabulary of Argentinean tango. It is this adventurous, highly effective innovation that makes "Tanguera" a unique experience. Borrowing from both its traditional and modern styles, Godoy uses the tango as a theatrical dance form—to advance a story line, develop characters, express moods, and establish time and place.

The resulting 90 minutes of compelling theater are performed by an accomplished Argentinean cast. Cecilia Monti's costumes border on cheesy, and Ariel del Mastro's lighting is sometimes overly dramatic. But the linearity of Valeria Ambrosio's spare, smartly designed set reflects the body lines of the choreography, while leaving plenty of space for the dance.