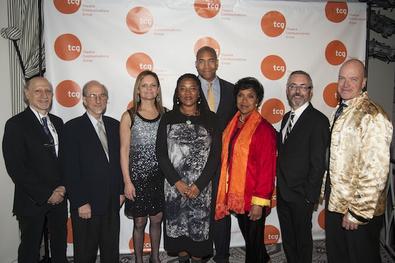 “It was Doris’ habit of investing in artists in her own lifetime, many artists who were dismissed in their own time when in fact, they were simply ahead of the times in which they lived,” said program director for the arts Ben Cameron when he accepted the award on behalf of the foundation. “It gives us license to do what we do.” Cameron went on to say Duke donated $50 million to “invest in multi-year, largely fledged fellowships for artists to help them save for their retirements.”

“We’re thrilled to celebrate three honorees that have made such an indelible impact on the theater field,” said Teresa Eyring, executive director of TCG, in a statement. “From Jules Fisher’s living legacy in designing lights for over 300 productions on and off-Broadway; to Doris Duke Charitable Foundation’s transformative support for theaters and theater artists; to the modern-day classics such as ‘Intimate Apparel’ and the Pulitzer Prize-winning ‘Ruined’ penned by Lynn Nottage; the 2014 Gala is an opportunity to express our gratitude for these honorees who have given our field so much.”

Jessica Hecht acted as the evening’s emcee with Joshua Dachs acting as the gala chair, and Ruth and Stephen Hendel as honorary gala chairs.

TCG’s annual gala is designed to support the group’s core programs “including its grant-making arm, now celebrating more than 40 years of providing transformative grants to artists and theater companies.”

Briana Rodriguez
Briana is the Editor-in-Chief at Backstage. She oversees editorial operations and covers all things film and television. She's interested in stories about the creative process as experienced by women, people of color, and other marginalized communities. You can find her on Twitter @brirodriguez and on Instagram @thebrianarodriguez
END_OF_DOCUMENT_TOKEN_TO_BE_REPLACED