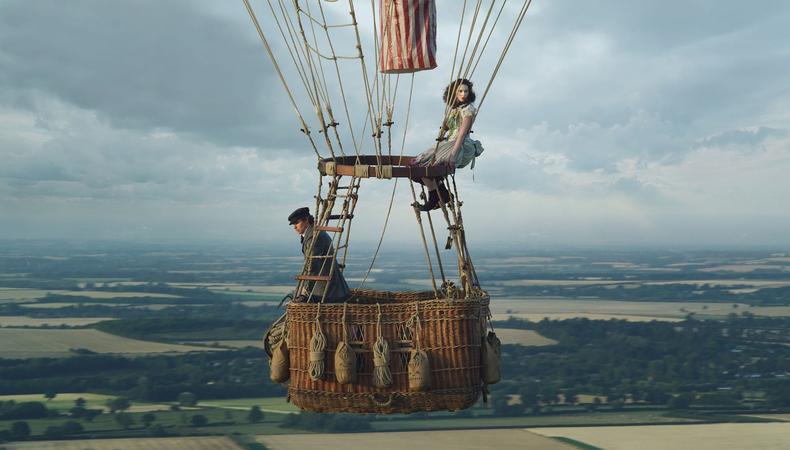 How do you set an entire film in a hot air balloon ride? You hire visual effects supervisor Louis Morin—which is exactly what “The Aeronauts” did. The film, which stars Eddie Redmayne and Felicity Jones (an Oscar winner and nominee, respectively, for “The Theory of Everything”), hits theaters Dec. 6 and depicts a perilous 19th-century balloon ride that requires exactly as many special effects as you’d imagine. Morin, whose previous credits include “Eternal Sunshine of the Spotless Mind” and “Arrival,” is intimately familiar with both the capabilities and limitations of blue screens, CGI, and more, which means he also knows exactly how actors should work with them.

What would you say VFX supervisors actually do?
Basically, we’re working for the production, so the studio or the producer will call us and say, “Look, we have this project, we have this film, we have a script, and we’d like you to take it on.” The trick is figuring out what do we do live and what do we do in visual effects; what is most effective financially or creatively to achieve whatever is in the script that is potentially not possible to shoot live? That is the first step, and then after that, you usually meet with the director—he has his vision, and we’ll have to make some kind of “soft list.” Then we have to shoot it and just make sure that we get all the ingredients, like cooking. We go shopping and get what we need in order to do the cooking. And once we get into post-production, we’ll have an army of people doing whatever the plan is, often in very little time. That’s my job: to make sure everybody’s happy at the end.

How closely do you collaborate with the director?
Very closely. The director has his vision. Sometimes I’m lucky and get someone who wants to collaborate because they like to knock around ideas, specifically with animation or stuff like that. It’s a very creative job, but you are “the slave of the master,” and the master is the director. You work hand in hand with them as best you can.

READ: What Actors Need to Know About Working on Green Screens

Would you consider VFX a technical job or a more creative one?
I used to be on the production side, which becomes more technical as you go down the various tasks that need to be done. On my side now, it’s more creative but still technical in the sense that everything has to look realistic. You have to understand what the best options to actually achieve these visual effects are, you know? You don’t rely 100 percent on computer effects. You can shoot some elements, for example, so it’s a marriage of technique and approach and working in collaboration with the production designer, the stunt coordinators, the special effects people. The director of photography is very important, too.

VFX is a major component of “The Aeronauts”—what was unique about this VFX process?
When I first got to set, it was for a test, and Eddie Redmayne was there. He looked at me and said, “Hi, Louis.” He knew me before we’d ever met, which means he did check me out beforehand because he had concerns. He had done “Fantastic Beasts,” and so he had visual effects concerns. We didn’t have that much money. Everything was going to be on blue screen and he got a little bit worried, like, “Is it going to show up? Is somebody going to say, ‘That’s not real; that looks fake?’ ” That’s the scary part of this movie, because it’s wall-to-wall, 80 percent of the movie. That was my challenge and my biggest fear. I don’t want anybody to think it’s a blue screen, you know? That was the challenge, because you’re in the sky, and it becomes highly subjective: What’s real and what’s not?

This film uses VFX to realistic effect—weather, atmosphere. Is that any different than when you’re using VFX to achieve something surreal?
I always try to work the same way: “What is real?” or “What is reality?” The guys at work would say, “Give me some references. What do you want? What kind of sky do you want?” So you do tremendous research on visuals. We went shooting like crazy. We shot a lot of helicopter high-res shots of sky, because you’re trying to see what’s reality, [and] then based on that, you have to bring imagination into it. On “Aeronauts,” when we were shooting the storm—obviously, we’re not going to go inside a storm to take pictures. But we had some other ideas that I showed [the team] beforehand. To me, it’s kind of the “beast.” You base elements on the things you’ve done or the reality that you see. You build something, then you give yourself a bit of leeway here and there to make it appear real for your storytelling.

As the VFX supervisor, how much do you work directly with actors?
To be honest, not that much. I do some facial motion capture with the actors. It depends on the project, how much you’re involved with them, but they care about us because they know that we can be trusted. We don’t see the set or the blue screens, so we want to make sure they are acting in something that looks real. Actors are mainly under the director, in general, but for example on this movie, Felicity [Jones], was amazingly willing to do lots of stunts and stuff, so sometimes she’d be curious to see what she was actually playing for, what’s there.

Do you have any advice for actors who are working in scenes that are heavy on VFX?
I’d say, try to find references. To me, shooting on the blue screen is like theater, like you’re in a play. Sometimes in plays, you don’t have much of a set or many set pieces, depending on the budget you have. Some plays are pretty bare. But the audience still imagines the actor as if he’s somewhere. That is done through bends in the light in the corner of the stage to show that [the setting] is actually the park at night. It’s the same thing with VFX. We try to find the ingredients, the elements that actors can use to project themselves into the environment. Sometimes, luckily, we’ll have some strong references, and more and more we’ll have the 3-D environment so the actors can see it on the monitor. That transmits now; the actor can see, “Oh, that’s going to be there, that’s the space I’ll be playing in.” They have to imagine what’s there and put themselves into the character. We will always try to accommodate you, the actor, because your performance is key.

Casey Mink
Casey Mink is the senior staff writer at Backstage. When she's not writing about television, film, or theater, she is definitely somewhere watching it.
END_OF_DOCUMENT_TOKEN_TO_BE_REPLACED