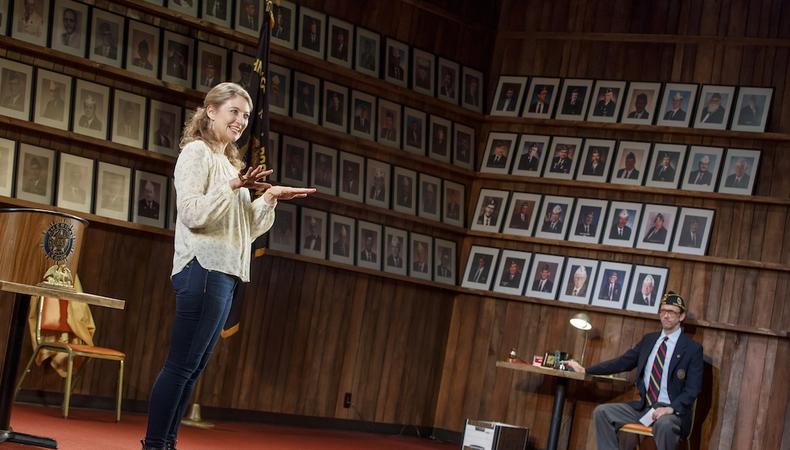 Brooklyn-area actor and playwright Heidi Schreck’s latest play, “What the Constitution Means to Me” (which just transferred to the Greenwich House Theater for an encore run through Dec. 30) is more than a personal excavation of Schreck’s childhood relationship to our nation’s founding document. It’s a call to arms. We spoke with Schreck—whose work has appeared on stages and screens around the country, including Amazon’s “I Love Dick” and Showtime’s “Nurse Jackie” and “Billions”—about the challenges of writing autobiographically (the play charts her time competing in debate-like Constitution contests) and the advice she has for actors who want to put pen to paper.

This play is very personal to you. What was the seed that made you want to tell this story in the first place?
I planted the seed so many years ago. I had the idea 20 years ago; I didn’t do anything with it for 10 years. But my initial idea 20 years ago was simply to create a piece based on my experiences as a teenage girl doing these Constitution contests. It seemed like fertile territory for a show, and I’m a natural storyteller. I used to work as a reporter and journalist, and I thought that it seemed exciting to somehow take this contest and find a way to link the personal to the political. That was a long time ago, and life took over and I ended up writing all sorts of other plays. The most exciting part of the contests for me was the extemporaneous speaking portion where you would pull an amendment from a hat and then just have to talk about it off the top of your head. Of course you prepared, but I loved that part of the contest, and so my idea was: What if I were to find personal stories that connected with every single amendment? That proved to be too ambitious. So I went with one amendment—one section of one amendment.

The play’s exploration of the Constitution’s effects on female Americans is especially relevant today. It’s always interesting to me how current events can inform an interpretation of a piece of art even if the art isn’t necessarily commenting on those current events.
The truth is that the things I’m talking about and exploring and investigating in the play are centuries old, and so they are part of the fabric of our country. Now we just happen to be in a very vivid moment in terms of confronting the misogyny in our country, the racism, the entrenched white supremacy, the entrenched kind of white male power at the heart of our culture. The play was always exploring these things because these things have existed since the beginning of our country. So in a way, the play is timeless—and it just happens to be a very hot topic right now.

I saw the play myself the week of Brett Kavanaugh’s hearings with Christine Blasey Ford, and you got quite emotional onstage. Is it difficult to perform? How do you feel about it?
I feel lucky to be performing it now. On [that] Thursday morning, I watched the hearings and I felt gutted afterwards. I didn’t want to go perform the show. I thought, Why does anyone want to hear more of this? Am I going to trigger people? Is it just going to further upset everyone, including myself? And then I found performing it to be cathartic and galvanizing, and that seemed to be true to the audience, as well. The play ends in a hopeful way, and so I get to leave the theater feeling hopeful about the future of this country and it feels like the audience experienced that, too. So ever since that night, I’ve found performing it to be actually quite a joyful experience.

Aside from this new play, you’re a longtime working actor. Do you have a history with Backstage?
I did when I first moved to the city, yes. That was in 2003, I guess? I would go to open Equity auditions; I would scan your paper for audition notices.

What advice do you have for other folks who are making that transition to the New York market? I’m sure it was a learning experience, to say the least.
Oh, yes. This is my advice and this is what I did: I saw as much theater as possible; I sought out the playwrights that I loved. I went to all their plays. I made friends with them. I spent my first year in New York trying to understand what kind of work I loved and was attracted to and trying to get to know those people. To me, that was helpful as an artist to cultivate my taste and sensibility. It was also really helpful in terms of getting cast.

Have acting and writing always gone hand in hand or did one come before the other?
Acting came first. I grew up in a small town in Washington State and my mom had a Shakespeare company for kids called the Short Shakespeareans. So I played Hermia when I was six years old, and between the ages of six and 12, I played all the great Shakespearean women. That was my introduction to theater. And then I started writing in high school and college; I wrote plays in college, but I was always kind of acting and writing together.

So many people are told today if they want to get into the performing arts, they have to make their own content. What advice do you have for those young creators to find their voice?
First, I think actors are terrific writers—I mean, clearly there’s a long history. I think we have a deep sense of what is theatrical. We write great dialogue, we know what it means to actually create a text that can be live and performed in front of people. I would say to actors, you already are writers—the work you do onstage has uniquely prepared you to be fantastic writers. In terms of how to begin, I teach playwriting and I have a lot of ideas for this. One of the first exercises I give to my students is I ask them to write a monologue in the voice of an elderly relative, to just try to conjure and imagine the stories told by a grandmother or a grandfather or a great aunt. Try to write in their dialect in a specific voice. And this exercise, everyone can do it! It produces incredible pieces of writing. I find it really helpful in terms of teaching both storytelling and language, how to hear your characters’ voices, how to channel them, how to listen to the way people talk.

As a final question, what’s your best piece of audition advice?
Even when you brought it up my heart started to beat fast.

It helps when you write your own stuff because you don’t have to worry about it.
Yeah, my advice is write your own stuff so you don’t have to audition. No, this is like my biggest piece of advice. [And] as an amendment to that, if you do have to go to an audition, forgive yourself beforehand for anything that happens in there. Fuck it up, it’s fine. There will be other opportunities. I totally whiffed auditions in front of people who then cast me later; it’s all gonna be OK.

Benjamin Lindsay
Benjamin Lindsay is managing editor at Backstage, where if you’re reading it in our magazine, he’s written or edited it first. He’s also producer and host of a number of our digital interview series, including our inaugural on-camera segment, Backstage Live.
END_OF_DOCUMENT_TOKEN_TO_BE_REPLACED