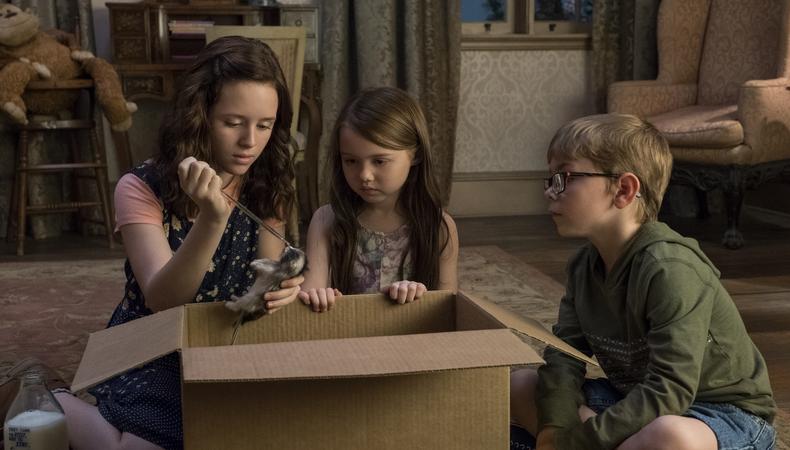 To adapt Shirley Jackson’s “The Haunting of Hill House” for Netflix was not an easy undertaking. There are the elements of the high-quality horror tone, children, and the fact they are younger versions of adult actors to consider. The CDs responsible for finding the right residents of Jackson’s house of nightmares, Anne McCarthy and Kellie Roy, looked far and wide to find the perfect actors. Between past working relationships that turned into job offers and finding a six-year-old in Texas on a self-tape that was perfect for a role, they sought out talent in any way that would serve the project. Whether you’re a seasoned actor or you’re sending in your first self-tape, McCarthy and Roy want to see it—they cast more than one first-timer on “Hill House” and McCarthy shared how, why, and where they discover new talent so you might get your chance, too.

Talk about the casting process for “The Haunting of Hill House.”
We knew who the characters were, and we started with Michiel [Huisman]’s role because he was sort of the centerpiece. Flanagan and Trevor and I worked with several of the cast going back. Like, Carla [Gugino] was in “Gerald’s Game” and she had a great relationship with them and really wanted to work with them again, and vice-versa. And Elizabeth Reaser had worked with Flanagan and Trevor before. And then there was a mix of that and different discoveries, like Victoria Pedretti, who’d just graduated from college, and she was a little breakthrough for us. When we saw her audition, we were so excited about her. And her episode, in particular, is just heartbreaking and she is just beautiful in it.

How did you cast the kids?
That was a lot of auditioning, both locally and, quite frankly, all over the country. We had kids self-taping and coming in if they lived in Los Angeles. It was hundreds and hundreds of kids and then it was a mix of finding the best actors and kids that looked like their counterparts, which was tricky. So, it was definitely a balancing act.

What was required of the kids to show they could play the younger versions of the adult actors you cast?
They all read different scenes, but we weren’t looking for it to be exact in that regard, mannerisms and the like. It did turn out that the kids, even in their own personalities, were very much like the actors themselves in real life.

What were the kids’ auditions like?
All of them had different scenes. Some were more playful, others were very dark. With the exception of Violet [McGraw] and Julian [Hilliard], most of the kids were of an age where they were aware of what the content was. Julian, I think he was six and he’d never done anything before, so he was not fully aware of what was going on. I believe he was in Texas, so he went on tape.

How do you ensure that the younger talent can successfully act in this darker, scary world?
We usually give them very specific instructions when they’re going on tape, and generally, we try to do that not just with kids, but with anyone when we’re asking them to go on tape so that they’re not operating in a vacuum, especially with projects like this where they don’t get a script. We give them very specific character breakdowns and direction on what to do so that they’re not handicapped.

What were some of the challenges that you ran into on this job?
The casting of the kids was definitely challenging just because of having to match them so specifically and because all of their counterparts are so unique in themselves. I think that was probably the most challenging part. But it didn’t feel like that because when we look back on it and it’s finished and it’s something that we’re so proud of, I don’t remember it that way now because I’m just so happy that it turned out the way it did.

READ: Should You Hold  Your Sides During an Audition? It’s Complicated

Where do you look for talent outside of agent submissions?
We’re always open to people self-taping who don’t have representation. We watch everything because you never know where you’re going to find a diamond in the rough, so we have actors reaching out to us directly all the time. They just want to send their material, send their reels, go on tape for something, and we’re always pretty open to people who don’t have agents and managers. Sometimes with the volume of it, they may not hear back, but we do watch everything and we do keep specific feedback so we remember everyone. On “The Haunting of Hill House” if we read 3,000 people, all in all, it’s hard to give feedback on all of those. But they do get seen.

What can an actor do in an audition or on a tape that will make them more memorable or stand out to you?
Be prepared, be authentic, be themselves. It’s distracting to see people who are not prepared or who are looking down all the time at the pages. On the flip side of that, I also understand that being off book for every audition is not possible with the sheer volume of auditions that everyone has to do. But being as prepared as possible is always memorable.

What advice do you have for actors?
Be authentic, be comfortable. It’s a different skill set, auditioning, and it can be uncomfortable walking into a room with people you don’t know and pouring your heart out. It’s a difficult thing to do. But if they know that we’re on their side, which is what we always tell people, the better you are, the better we are. We really love actors and we really do want them to be their best. If someone’s not getting it in the room, we’ll take the time to help them. Especially in this day and age when 90 percent of the movies we work on, no one can even look at the script, we want to take the extra time to help them be as good as they can. It’s a different skill set and although you’re still acting and using the same muscles, you’ve got to walk in and sort of have this mini-explosion. And then, you’re done in 10 minutes, and you’re reading opposite someone who could be a great reader but is not an actor. That is better because they are getting them exactly what they need in that moment and know how to steer that in the way in the reading.

What can actors expect from auditioning for you?
It’s a very friendly place. We’re there to make them better, or as good as they can possibly be in that environment. We’re very supportive. It’s not just a “next!” situation.

What shouldn’t someone do in your audition room?
Not be prepared. I feel like a broken record, but if it’s not good for them, then it’s not good for us. Again, we’re there to have a good experience for everyone, but if you’re not prepared, we can’t help. I’d rather you not come in. We’ll give you another time. We’ll be flexible. We’re easy that way. If you are bartending until 4:00 a.m., we’ll give you another day. It’s fine.

Elyse Roth
Elyse is a senior editor at Backstage, where she oversees all casting news and features content, including her weekly casting director Q&A series, In the Room. She came to New York from Ohio by way of Northwestern University, where she studied journalism, and now lives in Brooklyn. She might see and write about awards-worthy films, but Elyse still thinks “Legally Blonde” is a perfect movie and on any given night is probably taking in some kind of entertainment, whether it’s comedy, theater, ballet, or figuring out what show to binge next.
END_OF_DOCUMENT_TOKEN_TO_BE_REPLACED