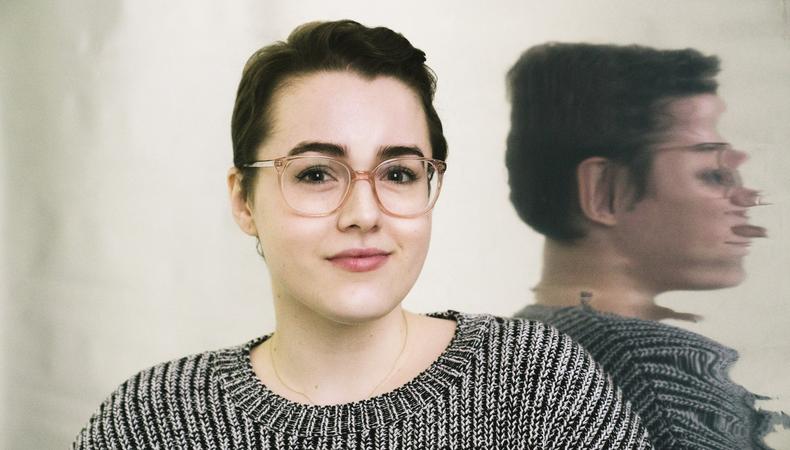 For those who like their musical comedies with hilarity and heart in equal measure, get in line for “The Prom,” one of our runaway favorite new productions of the season. While it stars Broadway vets Brooks Ashmanskas (“Something Rotten!”) and Beth Leavel (“The Drowsy Chaperone”) as famed New York actors vying for a charitable cause, at its center is Caitlin Kinnunen as Emma, a high schooler in small-town Indiana who attracts national attention after she’s denied the right to attend prom with her girlfriend. Kinnunen, who’s been with the show through various iterations over the last four years, recently sat with Backstage to discuss her stellar, inspiring performance.

Kinnunen built from the ground up.
“I love working on new works; I think it’s the most exciting part of being an actor, getting to work on new projects. I’ve never been with a project for this long, so being with it for these past four years and seeing all of the work that goes into it has been really eye-opening and exciting because you always get glimpses of that, but to really be in it for so long, seeing how much it really takes to get a show from nothing to Broadway has just been an amazing experience.”

Playing Emma made Kinnunen a more present actor.
“You don’t have to be afraid to be simple. I don’t have to try to be Emma; it’s not a lot of work. I just have to be myself and be present, and sometimes, that’s enough. I feel like people aren’t told that very often. It’s always, like, you have to make these crazy choices, you have to really embody things, you’re given so many notes. But with Emma, it’s just: Show up and be present, and the rest will take care of itself. I feel like that could be applied to many more things.”

Broadway’s demands require you to live “like a nun.”
“It’s much harder than anyone ever tells you it’s going to be. For me, it’s really about getting enough rest. I live like a nun right now. Go home and sleep, and drink lots of water, and get as much rest as I can and just protect my own energy and my own bubble, knowing that I have to do this eight times a week.”

Voice health is also top priority.
“Drink as much water as you possibly can. Like, if you’re not peeing all the time, you’re not doing it right. Just take care of yourself—don’t scream, don’t talk loudly, don’t run your voice down. I try to stay quiet. I don’t go out after shows, I don’t drink, I don’t smoke. Take all the fun things away and you can sing eight times a week. But then it’s also things like taking voice lessons. I take a voice lesson every month, I use my steamer every day, I warm up before the show, I cool down after the show. It’s like any sort of athletic event. You have to take care of your voice the same way you take care of your body if you were going for a run or dancing or any of that. You have to warm up, cool down, stretch.”

She avoids bringing “baggage” to the character.
“I’m never a person who brings myself onstage. I don’t like the idea of bringing my baggage into a character; that has always been a turnoff for me. Like, just because I had this hard experience, this character hasn’t had that hard experience, so I don’t want to relate that. For Emma, it was really important for me to listen to people who have gone through experiences like this and really just be honest with the text that was on the page and tell other people’s stories through her. I really didn’t want to bring any of Caitlin into her, and I wanted to be able to speak for herself and truly be who she is for the people who have gone through this. And I get so many messages online and fan mail saying that these young kids are seeing themselves onstage and that’s where I get it from. I get it from that.”

But bring yourself into the audition room.
“Be yourself. That sounds so like a cop-out answer, but I think it’s really important to bring you into the room. People are going to hire you for who you are. Yes, your ability has something to do with it, but it really comes down to if they want to work with you as a person, at least in my experience. So if you show up and bring your true self and show them who you are, they’ll be more drawn to that and want to work with you. It was a learning curve because I feel like, at least when I first started out, it was so about ‘I want to impress these people,’ and it took me a while to figure out: No, I just have to go in the room and be honest and be myself and I don’t have to be perfect. I just have to be me. And that actually takes a lot to be okay with, and it takes a lot to accept that you’re enough.”

She’s learned to never give up.
“Keep going. Keep going. This is hard. Being an actor is hard work. It is not fun and games. It is not easy. It’s incredibly difficult, but you just have to keep going and there will be payoff at the end, whether that’s in six months or 11 years—who knows? But if you don’t keep going, you will not find out.”

Want to perform on the Broadway stage? Check out Backstage’s theater audition listings!

Benjamin Lindsay
Benjamin Lindsay is managing editor at Backstage, where if you’re reading it in our magazine, he’s written or edited it first. He’s also producer and host of a number of our digital interview series, including our inaugural on-camera segment, Backstage Live.
END_OF_DOCUMENT_TOKEN_TO_BE_REPLACED