The Secret to Making it in L.A.? Grow a Thick Skin 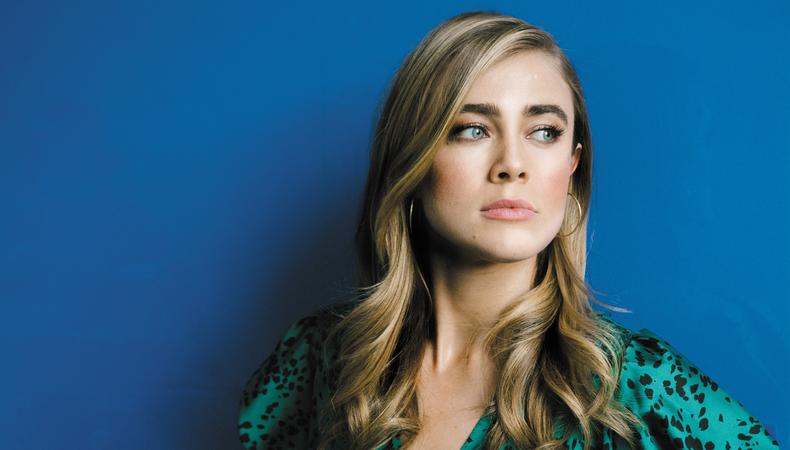 Melissa Roxburgh stands as one of network TV’s latest breakouts as the lead on NBC’s twisty sci-fi mystery “Manifest.” The series from creator Jeff Rake is inspired by the unsolved 2014 disappearance of Malaysia Airlines Flight 370 and follows Michaela Stone (Roxburgh) and her brother, Ben (Josh Dallas), after their shared flight unknowingly jumps forward in time. When they land, it’s five and a half years into the future, and they’re left grappling with unanswerable questions while readapting to the lives they once led with the people they once loved. Roxburgh came by Backstage HQ to tease the second half of Season 1 (which premiered Jan. 7) and to reflect on what she’d tell her younger self while living in “Hollywood North”: Vancouver, British Columbia.

On what to expect with the second half of Season 1.
“We meet some new characters who are very, very important to the story and to the mystery. They help us peel back another layer to the onion. And they don’t go away quickly; they’re with us for a long time—so you’ll have some answers pretty quick.”

She landed “Manifest” while midmove to Los Angeles.
“I finally decided that I was going to make the move [to L.A.]. I had a place with my best friend down there, and I flew down to just do a couple things and was going to fly back and bring all my stuff down. So I flew down and got this audition and was like, ‘I’m flying back the next day, I don’t know if wanna do an audition right now’—on top of the fact that I was still attached to another show [‘Valor’]. Then, as soon as I opened the audition at 2 a.m., once I had gotten home from my day, I was like, ‘Yeah, I can’t turn this down.’ I was lucky enough that it all worked out.”

Even on last-minute auditions, she finds the fun.
“It’s either your part or it’s not. I’ve had the pleasure of being in the audition room on both sides of the camera, and in watching different people come into the room, you kind of just go, ‘That person’s got it,’ or, ‘That person doesn’t.’ So what relaxes me is knowing that I can go in and do the best job, but it’s not personal if I don’t get it. I just show up and have fun with it, bring something that maybe they won’t see with other people in the room…. Then if I don’t get it, I had fun, and if I get it, even better.”

Show up ready to do your job like everyone else.
“My little sister just started acting, as well, and she’s kind of coming to me with questions that I would’ve had in the beginning, and I’m able to answer those questions almost as if I’m talking to my younger self. The one thing that I would tell myself is that everyone comes in to do their job. No one has all the answers. You’re just bringing a piece of the puzzle to the bigger picture.”

Being top of the call sheet sometimes means setting the tone on set.
“I have such an awesome co-star, Josh Dallas. He’s been doing this forever—he was on ‘Once Upon a Time.’ So he’s had the experience and the time to learn and grow in the industry. So working alongside him, I basically just turn to him for all of the advice that I can get. He’s such a wonderful and down-to-earth guy, so he’s always willing to tell me what’s good and bad. But the thing that’s kind of caught me by surprise is just what it takes to not only keep your energy up but to give your energy to other people. Because it is your job and other actors’ jobs to be friendly to everyone, to be courteous, to keep morale up. The fish rots from the head down, as some would say, so to keep the fish from rotting takes a lot, but the best ones do it well, and I’m learning from one of the best. I’m lucky.”

Collaboration is key when the camera’s rolling, too.
“What makes a good scene partner for me is just somebody who is generous with their work in terms of being open to actively listening to you in the scene or to your ideas or to not judging you, not telling you what to do. This entire process is a collaboration, and so if you get someone who you’re able to collaborate with and who doesn’t have an ego about them in that, then you’re really lucky. I try to do my best!”

Remember: You’re part of a business.
“There was one role that I really, really wanted, and I didn’t get it for whatever reason, and I remember going into a depression for three months. There are roles that you’re going to fall in love with, and there are roles that you’re not going to get, but at the end of the day, this is a creative business. It’s a business! And you can’t take it personally. The more that you do it, the more you realize that. Eventually, you realize it’s not a personal choice, and you move on to the next thing. You grow thick skin really, really quickly.”

Benjamin Lindsay
Benjamin Lindsay is managing editor at Backstage, where if you’re reading it in our magazine, he’s written or edited it first. He’s also producer and host of a number of our digital interview series, including our inaugural on-camera segment, Backstage Live.
END_OF_DOCUMENT_TOKEN_TO_BE_REPLACED