Theater of the Arcade: Five Classic Video Games Adapted for the Stage 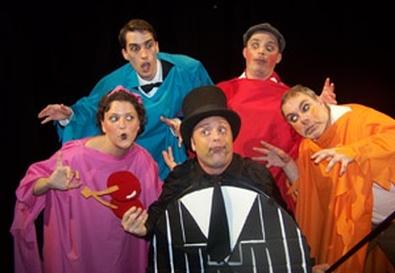 Photo Source: Jeff Lew
Most theatergoers will come half-equipped to the rollicking mash-up "Theater of the Arcade: Five Classic Video Games Adapted for the Stage," and I'll leave it to the cultural historians to unpack what it means when the majority of people sitting in a theater are more familiar with Donkey Kong than Tennessee Williams.

Each of the short plays in playwright Jeff Lewonczyk's ingenious cycle loans the style of a seminal playwright to a beloved coin-op game. So the poor frog from Frogger becomes one of Samuel Beckett's existential monologists, the estranged Mario Brothers find themselves in a hallucinatory Sam Shepard play, and Pac-Man is recast via Bertolt Brecht as Der Rundegelbenimmersatt, a gluttonous German aristocrat. These in-jokes are clever but never too pretentious.

The six-person ensemble is impeccable, but Fred Backus deserves the high score for his effete Rundegelbenimmersatt and his turn as a David Mamet alpha male in "Magdalena Magellan Mars," a foul-mouthed send-up of the spaceship pilots from "Asteroids."