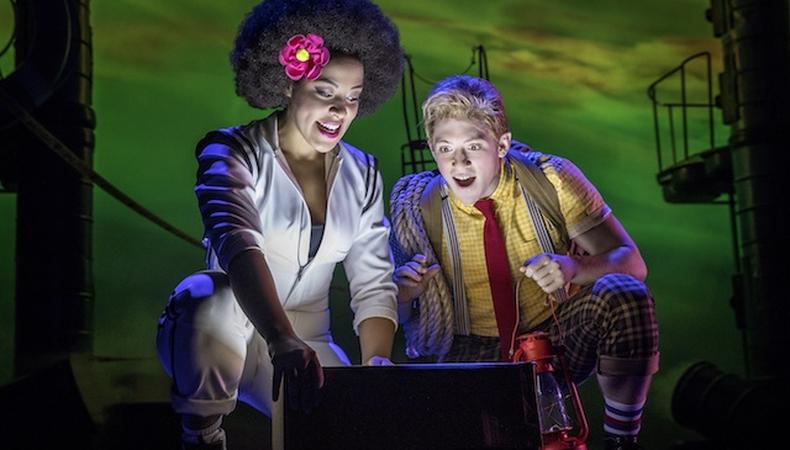 The “SpongeBob SquarePants” musical is heading into Tonys night this Sunday with 12 nominations, tying with “Mean Girls” as the most–nominated outing this season. And among those nominees—which include a nod for best new musical, best actor in a musical, best score, and more—is first-time nominee Kyle Jarrow, who’s squaring off with Tina Fey and others for the Best Book of a Musical trophy. We spoke with Jarrow in the lead-up to Sunday to learn more about his writing process, how he came to join forces with Nickelodeon and director Tina Landau in the first place, and what he wants from the actors he taps to bring his words to life onstage.

How did you first get involved with this production? I think it was about six years ago now. Nickelodeon was wanting to figure out a way to bring SpongeBob to the stage. At that point, they were just exploring it; they weren't even sure that they were going to do it. And they were looking for a writer to figure that out with. The woman who was executive producer for Nickelodeon, Susan Vargo, was familiar with my work and reached out to my agent. When I first heard from them, I thought to myself, "Man, I love SpongeBob." I’m a big fan. There’s a totally awesome version of this show, and there’s also a totally crappy version of this show. I was just praying that they wanted to do the cool version. And when I went in for the meeting, it was Susan and Tina Landau, the director who had been hired before that, and just hearing them talk about what they wanted to do—particularly that they wanted to capture the spirit of indie theater, and they wanted to do something outside the box—it was just immediately clear that they wanted to do the cool version, and I was like, “Sign me up.”

Now that we’re well into its run and you have 12 Tony nominations behind this thing, what has been the greatest joy of actually seeing it brought to life? I would say that the greatest joy is seeing this amazing company of actors perform. It is just an incredible ensemble of people of such diverse talents. There’s everything from tap dancing to hip-hop dancing to Ethan [Slater], who plays SpongeBob, has to climb an 18-foot ladder wall upside down. Just to see the joy and talent and energy that that company brings to the show every night, and just how infectious that is, it’s just really amazing and I feel so privileged that we were able to find such an amazing group of actors to just set the tone for what the show can be. It’s odd—you write something, and then you’re putting it into the hands of the actors and saying, “Hey, make this cool!” And it’s just so awesome when those actors take it and elevate the material and just make it rock. That’s what this company has really done.

What was the actual process with you, with Tina, with the team at Nickelodeon—what’s the creative process for a show like this look like from the book writer’s perspective? Basically what we did was I pitched a bunch of stories and we ultimately all chose one together, which is the one that you see onstage now. Basically, it’s the end of the world and they either need to decide whether to abandon Bikini Bottom or save it. I was really looking for a storyline that had the kind of stakes that could sustain a full evening of theater, but also had the opportunity to do some crazy, surreal, funny stuff. So that was definitely the craziest idea I pitched, and I was sort of surprised that it was the one that everybody liked. And then after that, yeah, I sort of worked out an outline, got notes from Tina and from folks at Nickelodeon, and then once we were locked and loaded on that, we started going to the various songwriters. It’s a little bit of a different process because the songs are all by different pop artists, and so at that point, what we did was we would say to them, “OK, Panic at the Disco, here’s the moment in the show that we would love for you to write a song for. Here’s the outline that gives you a pretty detailed sense of who’s singing it, what’s happening in the course of the song, how it fits into the broader story.” And then while we did that, I then started writing the script. And then it just became this process where songs would come in, I would then realize the book’s gotta rewrite a little bit to make this song integrate, or we gave notes back to the songwriter. It was very collaborative, which I think it needs to be with something like this. It’s just such a big operation, especially with so many different songwriters, that really open collaboration is kind of the only way you can end up with something that actually works.

There was also the added thing where you’re dealing with a character who’s really got, like, 20 years of TV episodes behind him in a world that’s really beloved, so there was that added layer that I think for all of us, we wanted to make sure that we were both creating something that felt like it was a theatrical experience that was really unique and felt different from all the episodes of the TV show and the movies, but also that felt like it respected the things that the fans are going to want. So that was an added challenge, and that’s another reason why checking in with each other was really helpful. It just kept us honest.

Looking to the history of SpongeBob, were there any episodes in particular that inspired you?I watched hundreds of episodes—maybe not every single one, but almost. Two that really inspired me—one of them, I know, is a big inspiration for Tina, as well—is “Idiot Box,” which I think is from Season 3. And it’s this episode where SpongeBob and Patrick order a big-screen TV, but when they get it, they throw the TV away, and they just want to play with the box. And it’s really an episode about how all you really need is imagination, and you can sort of turn any found object into something amazing. And to me, that really unlocks sort of the aesthetic approach, and I know for Tina, too, which is that we were going to do something kind of low-fi, where the set and costumes were really created from various found objects and where the theatrical magic wasn’t going to be super high-tech bells and whistles, but stuff that felt really organic. And another episode that I found really inspiring was this episode called “Squirrel Jokes.” That’s an episode, I think it’s in Season 2, where SpongeBob is trying to be comedian and it’s not going that well, and he tells a joke about Sandy the squirrel, and everybody goes nuts. So he starts telling more jokes about her. It’s ultimately about how it’s hurtful to make somebody feel like an “other” or an outsider. And that, to me, made me realize that you can actually take this world—this super fun, colorful, imaginative world of Bikini Bottom—and you can actually do some things in it that can feel like actually about something. You can deal with some tougher stuff in a fun way. So in our show, it was very inspiring to me, particularly to look at the character of Sandy, who’s the only character who’s a land mammal, right? She has to wear a bubble over her head to breathe underwater. It just felt like it made a lot of sense to look at her; she’s an outsider there. And when people get scared, they definitely tend to scapegoat outsiders. That’s unfortunately a very current issue, certainly in our country. [I realized] we can speak to that in a way that doesn’t seem like we’re hammering it, and it also feels like it’s true to this world. That was really inspiring to me.

I’m especially interested in your process when it comes to working with these actors. What the dialogue like between you as as the book writer and the actor who’s interpreting for the stage? There’s a decent amount of back-and-forth particularly, I think, because it’s a comedy. Jokes a lot of times work because of the person who’s delivering them, right? So there were definitely cases throughout the process where an actor would come up to me—I can think of a couple of specific examples with Gavin [Lee]. Ethan, too. Actually, really almost everybody, where an actor would come up to me and be like, “Hey, I totally get where you’re going with this joke. If I did this, I think it might be funnier.” And I’d be like, “Great, try it!” Finding how to sort of make the comedy really work and how to make it really work for that particular actor was a big part of the collaboration. One thing I will say: I personally like in the rehearsal room to just watch and take it in and let the director steer the ship, particularly on a big show like this where there’s just so many moving parts. And then for it’s those conversations on break or after rehearsal or whatever where I’d be sort of processing what I just saw in rehearsal and an actor would be processing what they just did, and we’d talk about it. But I would say particularly for comedy, there’s just so many great ideas in this show that are the result of the collaboration between the line, the actor, and the direction. And those three things are just really equal pillars, I think, in making comedy work.

So generally speaking, you like an actor who brings their own ideas into the room. Definitely. Well, what I think is helpful to me is if you stick to the script in the rehearsal and then you have a dialogue about it after. This is just personal taste, but on a big musical like this, if you’re kinda trying to change lines on their feet, that can be a little unwieldy just because there’s so much happening. But yeah, it’s awesome when actors bring [their own ideas]. That’s what it means to originate a role.

Benjamin Lindsay
Benjamin Lindsay is managing editor at Backstage, where if you’re reading it in our magazine, he’s written or edited it first. He’s also producer and host of a number of our digital interview series, including our inaugural on-camera segment, Backstage Live.
END_OF_DOCUMENT_TOKEN_TO_BE_REPLACED