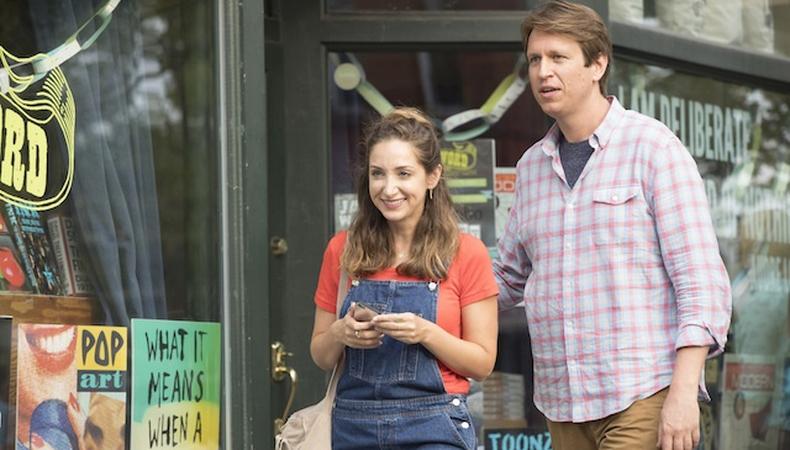 Jamie Lee made a huge wave on “Crashing” this week and officially took the plunge into becoming Pete’s full-blown love interest, Ali, after at-first begrudgingly showing him around Brooklyn’s alternative standup comedy scene. The episode, titled “Too Good,” aired on HBO Sunday, Feb. 11. Ali, a standup comedian on-the-rise, wasn’t a huge stretch for Lee to stretch her acting muscles; she actually got her start in standup comedy and writing behind-the-scenes (she was a writer on “Crashing” Season 1) before getting in front of the camera. Ali’s life and career onscreen is partly inspired by Lee’s own. She stopped by Backstage HQ to talk with us about her transition from writer to actor, the life of a standup comedian, and why it shouldn’t be embarrassing to show that you care about something.

She always wanted to do standup, but didn’t know how.
“I didn’t know anyone who did standup. I didn’t know how they got there and I wasn’t really wondering how, I was just a fan. In school, acting is a program. But they don’t have [standup programs]. I went to University of Texas [at] Austin, and they have a great film program and a great acting program, so I was just kind of circling around the thing I wanted to do. That was as close as you could get to it in Texas.”

Some of Ali’s jokes are inspired by Lee’s own vintage material.
“We took some of my older jokes and used them on the show because we’re trying to capture that slice of life of, ‘What were you saying on stage when you first started out?’ [Ali’s] bits aren’t as fleshed out. She’s grinding it out and trying to work her way up.”

Don’t be afraid to be passionate.
“I used to not really prepare. It was a defense mechanism. I was like, ‘Well, the less I commit to this, the less it’ll hurt when I don’t get it.’ And then, the second I started to invest, the returns became greater. One of the first times I worked with an acting coach, I got a callback. It’s not embarrassing to admit you care about something, and I used to think it was. The second I started caring, things changed.”

It’s important for your voice as a comic to remain authentic.
“I think it’s really hard [to stay true to yourself] because there’s a lot of factors. You get to a point where you realize that you can’t make everyone happy. It’s actually impossible. So all you can do is tell your truth and try to be a good person. Obviously, you’re not out to get anyone. The more authentic you can be, it is better in the long run. Even if you piss people off along the way.”

Sometimes, it’s all about the work.
“There’s this thing of ‘getting your reps’ in standup. At least in the beginning, you feel if you don’t do standup every single night, you’re going to forget how to do it. It’s like this weird, fake thing that you tell yourself. I would cancel plans with non-comedy friends to do five minutes in Harlem, alone. It’s really fun, and it’s really exciting. Even though you don’t see the fruits of your labor right away, it really feels like you’re a part of something.”

Be proud of the space you occupy.
“As much as you can, try to tune out the noise. When I was starting out, it was super competitive, and there would be times where I got really nervous before shows just because I would be like, ‘Oh, I’m going on the same show as this comedian. I feel intimidated by them.’ I think if you can tune that out, not be afraid to take up space, and know that your voice is just as important as anyone else’s, that’s going to be the thing that keeps you going the longest.”