10 Things You Didn’t Know About the Shubert Theatre 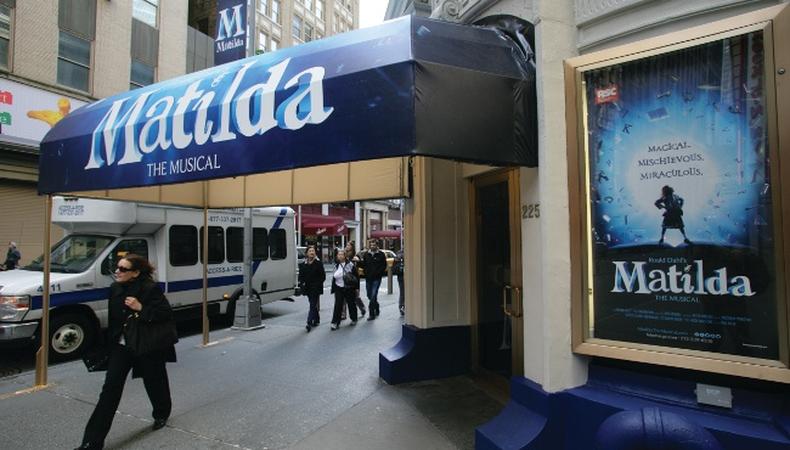 In honor of the publication of “The Untold Stories of Broadway, Volume 2,” we asked theater historian (and one of Backstage’s future power players of Broadway) Jennifer Ashley Tepper to share some of the stories she learned from her extensive interviews. Here are six facts about the famed, 101-year-old Shubert Theatre on West 44th Street, currently home to “Matilda.”

Time Capsules
Heather Tepe played Baby June in “Gypsy” at the Shubert in 2003. She and the other young kids from “Gypsy” made a time capsule and buried it under the carpeting in one of the Shubert’s rooms. Now in her 20s, Heather is a swing in “Matilda,” and dug up the time capsule on the first day of tech in 2013.

Stars Are Born
In the 1970s, John Travolta owned the Shubert stage in “Over Here!,” right before he was whisked off to Hollywood. Mae West played her largest role on Broadway at the Shubert in 1918. Valerie Harper made her Broadway debut there, sharing a sliver of the ladies’ ensemble dressing room in 1959. In 1928, a 25-year-old ensemble member in the musical “Ups-a Daisy” received faint praise for his turn as a comic butler—he was named Bob Hope.

Please Wash Your Hands
Let’s just say that in the “good old days” sometimes there weren’t enough bathrooms backstage, so everyone but the star would just pee in their dressing room sink! (You’re going to have to get the book to find out more about this one.)

Old Friends
Sardi’s Restaurant originally occupied the spot on 44th Street where the St. James Theatre now sits. Sardi’s and the Shuberts go back a long time; Sardi’s used to send dinner across the street to Lee Shubert’s office above the theater every night. When Sardi’s was booted from its original spot, the Shubert brothers came to the rescue. In 1927, they took land that belonged to them farther east on 44th Street and turned it into a new office building. They gave Sardi’s the first few floors. The Shuberts had originally intended to build a small theater there.

Occupied
In the ladies’ room located in the lower lobby, there is a secret pass door to get backstage. It leads directly to the basement-level dressing rooms. During “Matilda,” when the cast members enter and exit from the audience, they do so by running through this door. Because of this, part of the bathroom is roped off, except during intermission. According to original cast member Taylor Trensch, “It didn’t stop patrons from using that bathroom during the show, though. I had a lot of laughs with Lesli Margherita over bathroom noises.”

Green Thumbs
While the star dressing room is lovely, often the most coveted dressing room at “the Shubes” is onstage up a long set of stairs. This dressing room has a fire escape terrace that is large enough to garden on. As Tim Federle told me, “When a show runs long enough, eventually you see a picture of its chorus boys planting things. That’s when you know a Shubert show is a hit: when the chorus boys create a garden in Shubert Alley.”

Connecting Doors
While writing “The Untold Stories of Broadway,” I found out about many hidden areas that connect one Broadway theater to another. Perhaps most exciting to me is the outside area, sandwiched on all sides by Broadway theaters, that connects the Shubert, Booth, Broadhurst, and Schoenfeld theaters. During the 1950s, Robert Morse was in “Take Me Along” at the Shubert, and during the 15 minutes of the show when he wasn’t onstage, he would go watch his friend Tom Bosley in “Fiorello!” at the Broadhurst. During “Promises, Promises” in the 1960s, the ladies’ ensemble would often sneak next door after “Turkey Lurkey Time” and watch shows at the Booth. I was lucky in that Chad Kimball, who starred in “Memphis” at the Shubert, took me to the place to explore. It is a quiet oasis in the middle of bustling Times Square, only accessible to those lucky enough to work in one of the four famed houses. One reason the area exists was so the Shuberts themselves could easily travel between their own theaters—but today, it mostly serves to connect the Broadway community in their own hallowed spot.

Office Space
The offices of the Shubert Organization are right above the theater of the same name. The floors that are now offices were first built as the penthouse apartment of founder Lee Shubert. An elevator that runs from the basement dressing rooms all the way up to the penthouse was supposedly built so that Lee could bring the prettiest chorus girls upstairs to his lair. When I interviewed current Shubert President Robert E. Wankel, he took me down a staircase leading directly to the balcony section of the theater, and told me he’d often sneak down to watch shows on Wednesday matinee days. Former chairman Gerald Schoenfeld did the same, and often dashed in for the overture of “Gypsy.” A trapdoor in the offices used to allow leaders of the organization to spy on the show from upstairs, but it’s now closed.

No Small Parts
During the summer of 1975, when “A Chorus Line” was rehearsing at the Shubert, the creative team couldn’t hear Paul’s now-famous monologue from the back of the theater over the sound of the air conditioning. They contemplated putting a body mic on Sammy Williams, who played Paul, but sound designer Abe Jacob thought that would harm the realness of the moment. Instead, it was decided that each night, at the end of “The Music and the Mirror,” stagehands would turn off the air conditioning for the entire theater. No one would hear the motors shutting down over the loud applause. Paul’s monologue would be performed while the theater was silent and still, and afterward the air would be turned back on. Throughout the run, Abe observed that the sudden hotter temperature in the audience contributed to the tension of the moment.

No one knew how carefully orchestrated that part of the show was, and it contributed to how “A Chorus Line” affected its audiences for 15 years. As a young person, Broadway music director David Loud was a huge fan of “A Chorus Line,” and saw it many times. During the 10th year of the run, he was watching a performance when he spotted an usher putting a Playbill over an aisle light at the top of the show. David asked why she was doing that and she told him: When the show began, there was a sudden blackout and when the lights came up, the stage was full of people. The usher explained that director Michael Bennett had asked her to cover the light during that one moment. It made the blackout blacker, and was a little piece of offstage input that made the onstage story even stronger. The “A Chorus Line” musicians even warmed up in the alley, since warming up in the pit would remind audience members that they were at a show.

Starstruck
The “star” dressing room at the Shubert is on stage left, near the theater’s stage door. It includes a room in which to greet guests, a room to change in, and a private bathroom. The Shubert’s star quarters have been home to performers including Jerry Orbach, Angela Lansbury, Bernadette Peters, Judy Holliday, and David Hyde Pierce. Donna McKechnie told me that during the 15-year run of “A Chorus Line,” the production maintained that there were no stars—onstage or off—and the dressing room was turned into a stage management office.