10 Things Waiting Tables Can Teach You About Acting 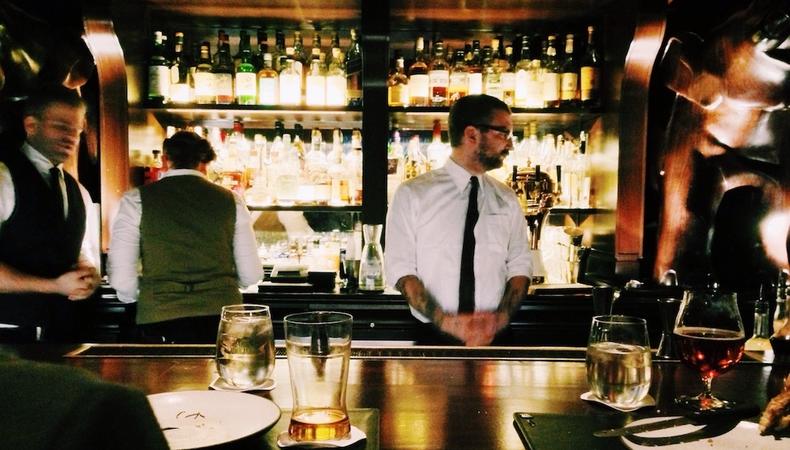 While living and training in New York City, I often had to wait tables to make enough money to live and pay my bills. Though some refer to a job like this as a “survival job,” I actually found that waiting tables taught me many valuable lessons about life and my craft. I hope these 10 things will encourage you to grow in your career, whether as a server or an actor.

1. Commitment and discipline.
Showing up means more than merely just showing up. It means showing up, ready to work and on time. In both acting and life, so much of what you need for success is rooted in your ability to be ready and prepared—think about how hard it would be to play a character if you weren’t. There are many times in both acting and serving when I just don’t want to be there; my ego is frustrated and angry, or I’m not in the mood to deal with people. Maybe I don’t want to explain the menu or memorize material or do breath work. But I’ve learned that sometimes you just have to fight through it because that’s where the real things happen. You begin to like it, then you begin to love it, and soon it doesn’t feel like work at all.

2. Playing the positive.
Not ever table I wait on is going to be pleasant. Some are going to be angry or upset or mean. And while I could easily match their emotions with my own, I’ve learned that it’s much easier and will get me much further to play the positive. People are moved by love; you can change the molecules in a room and emotionally impact people way more with positivity than negativity. To quote one of my teachers, “just play the love, it’s all I need.” Positivity is a much stronger choice than playing the victim.

3. Establish relationships.
Every table I wait on is a chance to create a relationship where there was not one before. Each one is an opportunity to practice interacting with others and create a story. What is my relationship to these people? What do I want from them? What do they want from me? Think about these questions like you would Stanislavski’s super objective.

4. Practice your vocals.
Have you ever been in a crowded, loud restaurant where it’s hard to hear yourself think, let alone hear your server recite specials? As a server, I learned so much about my own voice and delivery: I routinely tapered off at the end of a sentence, I wasn’t breathing properly to project. Announcing specials and answering questions in a loud environment turned me on to issues that could be affecting my delivery of lines, and since vocal problems become acting problems, it was crucial to address them.

5. Know your audience.
Every day, I had dishes (lines) to memorize from the menu (script) that I had to deliver to diners (audience). And depending on the diners, I’d have to tweak my delivery (the way I treated a family of four was very different than my interactions with a romantic date). In acting, you must learn who the audience is as they’re the fixture of the story. They’re the witness; they want to be part of it and you have to understand who’s watching.

6. Personalize the performance.
I always did better in acting and serving when I realized I needed to personalize myself before breaking the ice. Whether it’s introducing myself to a table of diners or a table of casting directors and producers, I always need to remember that I am human first and an actor second. If the talent and drive and commitment is there, am enough as myself, no gimmicks necessary.

7. Handle disappointment.
Having emotions is 100% ok. Like I said earlier, we are humans and humans have emotions. Sometimes you have a table who doesn’t tip, but you still have to continue with your shift and put a smile on your face for your other diners. Sometimes you don’t get the part but you keep training, auditioning, and pursuing your craft. In both cases, you did the best you could with what you had. It’s ok to be frustrated or angry, but learning how to handle those feelings and emotions is an essential ingredient to becoming a successful actor and human.

8. Be thankful.
Something changed when I learned to be grateful that I have a job that allows me to pursue my dreams, train, and audition when I need to. Being grateful is not something you can teach—it has to come naturally through experience—but when I finally figured it out, it created the peace I needed to keep moving forward. What’s more, be thankful for the team of people around you. Whether it’s teachers, classmates, or your fellow servers who jump in to pick up your shift when you get an audition, don’t forget to let them know you’re thankful.

9. Enjoy it.
Have you ever had a server who made your day? Someone who just radiated warmth and positivity, and who’s happiness was infectious? In acting, if you’re not fun (and having fun), you’re done. Casting directors and producers can sense when you really love and enjoy what you do and they want to help.

10. Learn on the job.
Or, more precisely, remember serving those who you might one day become. As a server, I’ve had the privilege of waiting on a decent number of A-list actors. In doing so, I’ve seen how these celebrities treat people around them, a good learning experience for how I want to treat people around me if I ever make it to their level in my career. Just because people know who you are doesn’t mean things need to change all that much—status should not dictate interactions.

Looking back on my years as a server, these tips are the best I ever got as they paid for far more than my rent. I’ve realized that being a server, training, and auditioning has led to the best times of my life and has created a space where the craft of acting is in some way untarnished. It’s still pure and innocent: I like being a server because it allows me the space to act because I love it and enjoy learning without constantly worrying about booking a role for rent money.

Chris Sax is a native New Yorker residing in Chelsea. He is a second drama student at Tom Tordoroff Conservatory in New York City. While training and study acting full-time, he has also worked as a server for the last eight years and is currently employed full-time server at Black Tap. He has performed locally and professionally for the last five years. He would like to thank his dramaturgy professor, Meron Langsner, for encouraging him to publish this article.

Check out Backstage's casting calls to book a gig!