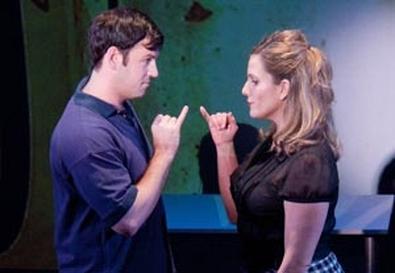 Photo Source: Peter James Zielinski
It could have so easily gone wrong. The basic premise of Tess Barker and Brett Schrier's "Time Between Us" had the potential of turning the show into a soapy version of "Will & Grace." Morgan, a straight woman, and her gay best friend, Matthew, work as substitute teachers in their small suburban town while sharing their dreams of making it to the top as a fashion designer and photographer, respectively. They make vastly different life choices and gradually grow apart. Morgan opts for family life, acquiring a husband, a daughter, and a permanent position in her hometown's school system, while Matthew forsakes personal connections to pursue a high-powered career, with his camera as his only meaningful companion. Their relationship tears when they confront each other for giving up a vital part of themselves. In a tearful final scene, they reconcile at the schoolyard swing set that Matthew left long ago and Morgan has returned to.

Sounds pretty clichéd, huh? But Barker and Schrier, who collaborated on the book and lyrics, have written a well-observed and poignant portrait of a changing friendship. Instead of hackneyed phrases and situations, the authors give us quirky and telling details of these nonstereotypical characters' lives. I also love that they both love pumpkin-flavored ice cream and that Matthew starts out as a bit of a slob rather than the expected elegant gay dresser. Instead of a tearful "I love you" at their climactic reconciliation, Morgan takes one look at Matthew's sophisticated new look and cries, "That's vintage Gucci, you bitch."

The show, cleanly and smartly staged by Richard Amelius, is like a series of snapshots of real people, and the photography theme is carried through in Jesse Garrison's intriguing projection design, consisting of haunting shots supposedly taken by Matthew. Schrier's music is fresh and evocative of character, never settling for the obvious, while the lyrics are equally inventive.

Actors Kristy Cates and Kasey Marino handily avoid becoming shadows of Debra Messing and Will McCormack from the famous NBC sitcom to which the story bears a resemblance. Cates has a beautiful, rich voice and intensely conveys Morgan's ambiguous attitude toward her unrealized ambitions and her home life. It's clear that this woman loves her spouse and kid but still regrets not following her fashion dream. Marino is also a fine singer and carefully charts Matthew's shift from a warm friend to a cold, calculating careerist and back again.

My only complaint involves the presence of a third actor, Tom Rainey, who blankly plays the men in both characters' lives. Rainey's bland demeanor may be a directorial choice, but he adds nothing to the proceedings.