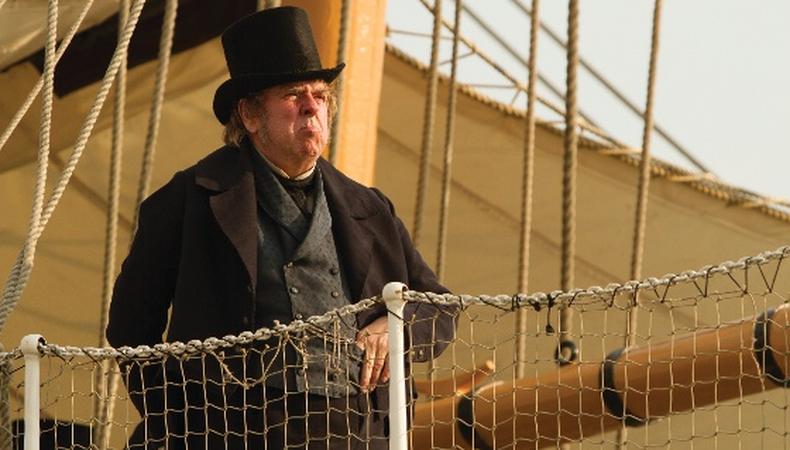 When one improvises films, as director Mike Leigh has done to much acclaim, one is limited only by the last choice made. The stories and characters can carom in any direction; a burst of inspiration can lead the film into entirely different realms. So the concept of improvising a biopic, with established characters and a historically accurate plot, is more than usually daunting.

Not so for Leigh (who previously took the same approach to “Topsy-Turvy”) or star Timothy Spall, who have created a warts-and-all look at British 19th-century landscape painter J.M.W. Turner with “Mr. Turner,” one that ultimately won Spall, a longtime Leigh collaborator, the best actor award at this year’s Cannes Film Festival.

“Without being highfalutin about it, we make it up,” Spall explains with a laugh. “That’s the simple story. The other is a long explanation of how you do it. Mike Leigh starts with a notion, an idea, and then he proceeds to build characters up and build a scenario, and then creates the drama out of that situation. And he did exactly the same with this, but we had a considerable amount of information that existed about Turner. So our job was to piece together all of that information and try to organically create a human being that would fit with that.”

The results are undeniably powerful, capturing the mercurial Turner in all of his abrasive glory. Whether he’s casually satisfying his sexual needs with his long-suffering housekeeper or—in what has quickly become the film’s most famous sequence—lashing himself to the mast of a ship to best observe a snowstorm to re-create with paint and canvas later, he’s vigorously, infuriatingly alive in a way we don’t typically think of men and women during the 19th century. But though Turner lived a robust life, Spall is adamant that they were careful not to force any spectacularly dramatic events into the film for the mere sake of including them.

“We had to push our creative juices to fill in the gaps, to use the evidences before us as a seed for artistic and dramatic license,” he says. “The fantastic consistency in it is his inconsistency. At first that was very frustrating, but then I understood and Mike understood that that was the point of him: His work is a lifetime’s commitment to trying to understand the contradiction in the sublimity of nature, which is its beauty and its destructive horrendousness.”

Creating an internal logic to a man so wildly contradictory posed its own particular challenges, ones that Spall met by studying (he took painting lessons to appear as if he’d been born with a brush in one hand and a palette in the other) and contemplating Turner, ultimately finding the freedom in re-creating the man.

“Every human being is a sum of contradictions to a larger or lesser degree, and Turner was to a larger degree a man of contradiction,” Spall says. “So we had to keep a very strong weather eye that we didn’t let that nature get out of hand and him do whatever he wanted. But the great thing is it is, as a work of art—it’s not documentary. There’s a helluva lot of the film based on eyewitness accounts; the way he walked, the way he talked. And people talked about him, some very fondly and some very blasphemously. But what there is for us all to see is the genius of his work.”

Much like the actor bringing him back to life on film.