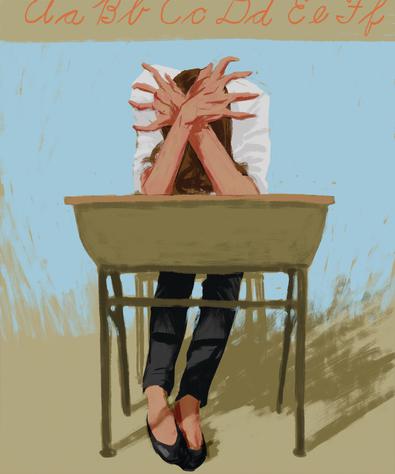 I love reading interviews with actors for a variety of reasons, but my favorite section usually comes about halfway through when they talk about how they started in the first place. Answers can range from an overly ambitious stage mother to taking drama in high school and finally fitting in somewhere. For most of us, it’s the latter.

The only reason I decided to act is because my best friend in high school encouraged me to join his drama class. The reasoning was twofold; he had a hunch I’d like it, and we would get to hang out together for an additional 45 minutes per week. He was really my training wheels in terms of learning how to take risks, and had I not had his encouragement I would probably be doing something entirely different with my life (so thank you, you know who you are, this is all your fault).

In any case, this class introduced me to my first acting teacher, Mrs. Anderson, who in turn helped develop my overall interest in theater and performance, which eventually led me to studying theater in college. After I graduated and moved to New York City, I thought I’d figured it all out. Imagine my surprise after pounding the pavement for a year in the real world. At one point I was considering joining a children’s theater company until I realized the whole thing was a racket in which a duo of “theater directors” promised roles to actors if they would pay a monthly “membership” fee. Basically the entire operation depended upon a rotating group of actors paying to keep the lights on while the directors reaped the profits from the shows. Let’s just say it gave an all-too-literal meaning to “paying one’s dues.”

I tried taking a recommended acting workshop with a theater actor who was part of a prestigious downtown theater group. He charged an exorbitant amount of money, canceled most of the classes, and never put together the promised showcase. He kept all the money and we never heard from him again. At my wit’s end, I finally tried an introductory summer course at the Esper Studio with Suzanne Esper. It led to me enrolling in their full-time two-year program and gave me the invaluable professional training I was craving.

Suzanne’s philosophies on acting, while firmly rooted in the Meisner Technique, were so intuitive and freeing that I felt it was pure luck that I’d been led to her. But I was also actively seeking out a specific kind of training I felt I needed at the time. It’s just as rewarding to take an Introduction to Acting 101 class as long as the class feels right to you. Is it giving you what you need for where you’re at? No? Don’t worry about it, just take the time to shop around and figure out what‘s going to work best for you as an artist.

If you dread attending class, know the difference between your instincts. If it’s fear because it’s new and scary, lean into it. If the red flags keep raising their ugly heads (e.g., your teacher seems to be canceling yet another class with no explanation or they publically humiliate you after you perform your first monologue), know that it’s not you; it’s them.