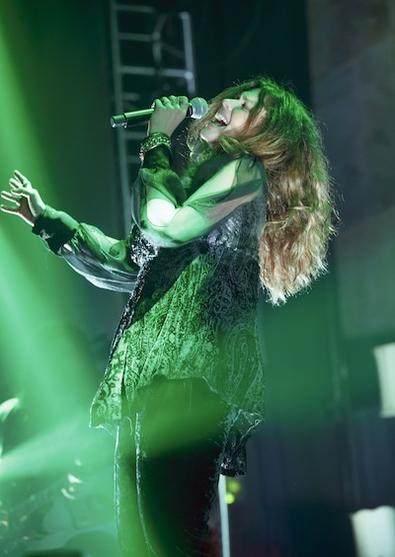 “A lot of people think that I’m some rock blues singer who slid her way into a Broadway gig, and I’m really a theater nerd who got in with a rock ‘n’ roll backstage pass,” says Mary Bridget Davies, who is making her Broadway debut in “A Night With Janis Joplin” at the Lyceum Theatre, where she is earning multiple standing ovations every night. The show officially opens tonight.

Davies has been playing Janis Joplin since 2005, when she was cast in “Love, Janis.” Davies jokes that she has been preparing for this role her whole life. In high school, she used to sing along to Joplin albums, using her hairbrush as a microphone. Imitating her movements came very naturally to Davies.

When she was starting out as a singer, Davies e-mailed Sam Andrew from Joplin’s band, Big Brother, and the Holding Company. The band was playing near her hometown of Cleveland, and they invited her to the show. She was floored when they asked her to join them onstage to sing “Me and Bobby McGee.” Since then, she has toured with the band and hearing the members’ first-hand accounts of Joplin has helped Davies color her character.

Davies has been starring in “A Night With Janis Joplin” regionally across the country, and now it’s brought her to Broadway. Theatergoers might be surprised to learn that as a teenager, Davies dreamed of being on Broadway, but as a tap dancer. Her background in competitive dance has helped her in this role. “The stage is like a rock ‘n’ roll jungle gym, and I’m flying up and down stairs in like open toe sling back mules,” she says. “It’s one thing to stand in the center of a stage and sing, and it’s another to basically be doing squat lunges and kicking and screaming at the same time and not losing your breath.”

Davies spoke about how her past has prepared her for this role, maintaining her voice, making her Broadway debut, and more.

Technique is important.
Singing in Joplin’s raspy voice for years hasn’t done damage to Davies’s vocal cords, and Davies is grateful to her time singing in a choir during her youth. “Because I have been singing professionally for a decade, I found ways to capture different trademark sounds that she could make without damaging my voice,” says Davies. “My singing voice on its own is far more pure. I [had] the proper training so that I can bend the rules vocally and come back without hurting myself.”

Hydrate. Hydrate. Hydrate.
When she is off the stage, Davies takes care of her voice by hydrating and trying not to get sick. When she moved to New York City, she started experiencing allergies. “Claritin D always works in a pinch,” she says, but adds that she is not a person who needs a Throat Coat to go onstage. The most important thing is to stay healthy and exercise. “It’s a very physical show,” she says. “I really treat it like athletic training, like an athlete would train for an event.”

Try improv.
Not only does Davies have a background in dance, but she also has improv experience, having studied at Second City Conservatory in Cleveland. She recommends that all actors try improvisation, which she says was a priceless experience. “It just makes you a kinder actor because it’s all about the communion with the other person and building something from nothing together. And it just makes you a better listener,” she says. “It turns on all of your senses so you’re an aware awake present actor.” Because “A Night With Janis” is presented as a concert, with Joplin telling stories about her past and musical influences in between songs, there is a lot of give-and-take with the audience. Many of the audience members are not theatergoers but rock ‘n’ roll fans who will scream things to her during the show. “Some people can’t take something being yelled at them when they’re on stage. It will throw them off their game,” she says, but Davies is able to respond quickly in a “Janis-esque” way because of her improv training.

Keep it fresh.
Davies has been performing this role for years now, but she knows she can’t hit the autopilot button. “That person sitting there, this is the first time she’s seen it. And you have to sell it to her like it’s the first time,” Davies says. It helps that she loves the material so much that she never gets sick of the music. If she hears a Janis Joplin song, she still “geeks out.” “When I sing those songs every night I do something different in each one,” she says.