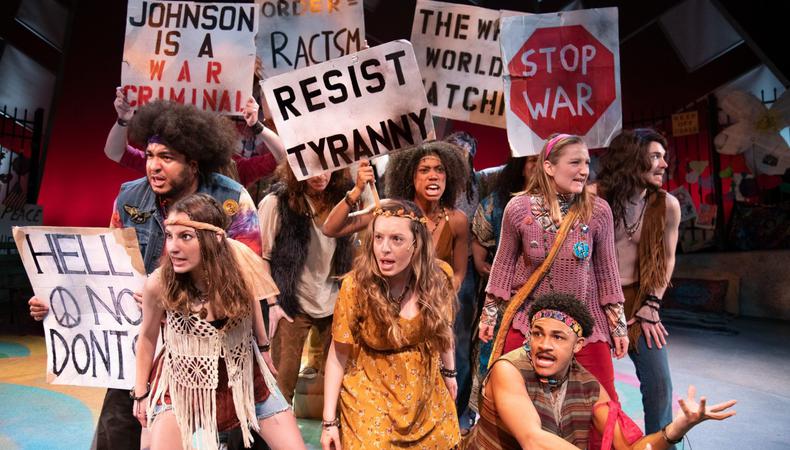 At the beginning of my acting career, I would go pick up a copy of Backstage every Thursday, sit down, circle the auditions coming up that I was right for, get with a voice and acting teacher that very week, and prepare as much as I could. I feel like some of that “process” has shifted since then! We need to take another look at what the audition process really wants from you to succeed in today’s marketplace—especially when auditioning for pop/rock musicals. Below are five tips to help you show up to your next rock musical audition informed, inspired, and most of all prepared!

1. Rock musicals exist in multiple styles. I call any musical that is not “legit” and that asks you to sing a song “off the radio” a rock musical. This means when a show asks for a “pop/rock song” for its auditions, it could be a Motown, ’70s folk, disco, ’80s pop, contemporary pop/rock, hip-hop, or country/bluegrass tune. Since one general pop/rock song will not cover all these bases, it is your job to research the show and find out what “musical world” it lives in. Then find songs that feel like that world, and take us there!

2. Pick a great pop/rock musical audition song. If you are a legit soprano, for example, I don’t want you singing Pink because she’s all you know. I want you singing Olivia Newton-John for the ’80s, Joni Mitchell for ’70s folk/rock, or Anita Ward for disco! In general, we’re not interested in how high you scream. We’re interested in what emotions you have and how they travel on your voice in a popular tune. And, what those emotions would do to you when you live in all these different styles of music. So sing something awesome that you connect to, not that lets you hit a high Q!

3. Find singers on Spotify and Pandora, and just listen! When you are first starting out in the pop/rock musical theater audition process, it’s good to identify singers that have your quality or range for what to sing for an audition. Then, listen to singers who do not sound like you. Those people will make your voice rich and textured and scrumptious! There is no better training than listening! Just like we need to understand and learn how to communicate with other cultures to understand them, we need to listen to different styles of music to do the same.

4. Rehearse with a piano player. The sheet music you’ve been finding on the Internet was not cut and arranged for the piano for a rock audition—unless it’s someone like Regina Spektor, Sara Bareilles, or Billy Joel. Most of the time the singers don’t write or read music, so the publishing company creates this arrangement and the drum, baseline, and horns are crammed into the music, and the melody line is doubled, so you end up competing with the piano just to be heard. So you must learn how to communicate feel, not tempo, to your accompanist so it sounds like how you hear it on the radio. If you don’t learn how to communicate feel, your song will not sound like it does on the radio, because the piano player will not play it the way it sounds on the radio, and you will not be able to perform it like you are someone who understands popular music. Take the time to learn how to give feel, then rehearse that every time you rehearse your song so you get really good at it!

5. Don’t act your pop song, feel it! These recording artists we love on the radio are not acting—they are not explaining, telling, or showing. They are not moving a plot! It’s a moment in the artist’s emotional life. Be emotional; have your feelings; share them with us. Don’t move the plot, move through your feelings! That is a great story to tell.