Tips for Working with Fake Blood 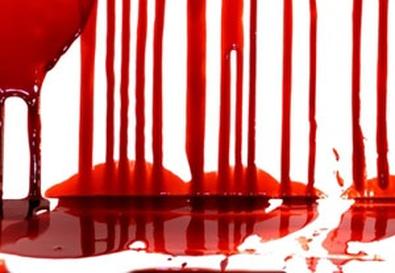 Vampires and zombies. Cops and corpses. Murderers and mad scientists. All parts an actor might be called on to play-and all will likely put you in the vicinity of fake blood. Here are a few tips for working with this sticky, sinister substance.

Even if you're protected by a multilayered costume, there's no guarantee the stuff you've got on underneath will survive a day of pseudo-gore. Actor David Mattey sacrificed a few unmentionables while being drenched in 18 gallons of fake blood during a gory death scene in the cult-classic film "Citizen Toxie: The Toxic Avenger IV."

"The underwear I had on under my costume for that scene was pink for the rest of its life," he says. "Wear stuff that you aren't in love with, 'cause you may have to throw it out."

2. Invest in a can of shaving cream.

Your skin may also bear the brunt of heavy-duty blood work. "Shaving cream is really effective at taking the red stains out of your skin without being too abrasive," says actor Graham Skipper, who engages in plenty of bloodletting as mad med student Herbert West in the L.A. stage hit "Re-Animator: The Musical."

And there's an added beauty benefit, notes Mattey: "Shaving cream not only gets the stuff off, it moisturizes."

Fake blood may be one of many effects you're working with, but try to remember that it's more than a mere prop. It likely represents something crucial happening in the scene.

"When the actor can link himself or herself with this special effect that they're wearing, then they have the ability to move with it and let it become an extension of that character," says special-effects designer Waldo Warshaw, who has worked on multiple productions of the blood-soaked play "The Lieutenant of Inishmore."

Jaime Kirk, co-owner of the pirate performance group PDXYAR, has extensive experience in stage combat. When they're prepping, he advises actors to think of the last time they saw their own blood: "That first crystallized moment of realization that lasts what seems like forever. The initial instant wherein it stopped being just visual data and became real. Lock that thought away, because it's about to become part of your process. If you make the blood feel real, the audience will feel it as well."

"If you allow the reality of it to take over, you will do a good job," adds actor Jaime Andrews, who had to vomit up a whole mess of blood for a gruesome sequence in the short film "Wretched." "If you believe this is coming out of you, or out of another person, you can't help but react."

And take special care to consider how your character in particular would react. "My character isn't very squeamish when it comes to blood, so I try to relish it as much as I can," says Skipper of his "Re-Animator" performance. "There's a scene where I behead my nemesis with a shovel, and quite a bit of blood shoots up into my face, chest, mouth, nose, eyes-pretty much anywhere-when I do it. I really revel in that moment, because I feel like having the audience seeing me rejuvenated by all that gore ends up getting them more into the spirit of things."

Even if you're connecting with your bloody scene emotionally, you'll be sunk if you don't master a few technical details. Remember, for instance, that fake blood is slippery: If it's all over the floor, watch your step. If you have to spit it out, learn how to aim. (Mattey credits Little League for schooling him in the art of "being a good spitter.") And when it's coming right at you, figure out where it's going to hit.

"I learned to know when and where it's going to be spraying," says Skipper. "In the scene where I wrestle with a bile-spewing intestine, there was one night early on when a high-powered spray of blood got me in both eyes. I finished the scene almost completely blind. That wasn't a fun surprise to have while singing a song."

When in doubt about the technical aspects, says Mattey, don't panic. The makeup effects team is your greatest resource. "They're going to be there to take care of you," he says. "And in most cases, they have more experience than you do dealing with this stuff."

5. Take care of yourself.

At the end of the day, working with blood can be just as draining as any other acting challenge-sometimes even more so. "Don't underestimate how upsetting it can be," says Andrews. "If you're going to go to a dark place in the scenario, make plans afterward for a bath with good music or a quiet night with good friends."