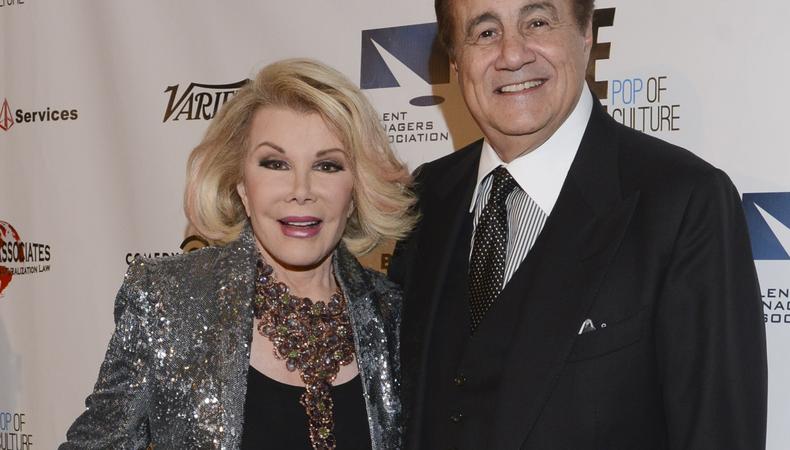 Although the invite states that no performers are allowed, that couldn’t stop Joan Rivers and William Shatner from coming to honor managers, agents, and casting directors at the 12th Annual Talent Managers Association Heller Awards at the Beverly Hilton Hotel on Sept. 19.

The evening began with a musical act and then proceeded to the special awards. The Lifetime Achievement Award was presented to Larry Thompson by two of his clients—Rivers and Shatner. Rivers noted that Thompson bridges old Hollywood and current Hollywood: “What he doesn’t know, he goes out and learns and then he embraces it totally.” She went on to explain the difference between agents and managers, “Agents see you for what you do at the moment; managers see you for what you could do.” Shatner also had words of praise for his manager, but joked about their first meeting when he questioned Thompson: “Why do I need a manager? Fifteen percent to the manager, 10 percent to the agent, 5 percent to the business guy, 50 percent to the government; think about the ex-wives. If I work I’m going to owe money.” In his acceptance speech, Thompson offered some words of wisdom. “I’ve learned that you can’t get hit by lightning if you’re not standing out in the rain,” he said.

Actors had many words of thanks for the agents and managers when presenting awards. “There’s so many people that get recognition for being in front of the camera, but we wouldn’t be where we are without people behind the camera, without my agent calling me up and being my shoulder to cry on, and my punching bag sometimes as well, then I wouldn’t be here today and I wouldn’t be doing the work that I’m doing,” presenter Tom Pocock (“X-Men Orgins: Wolverine”). Grant Show (“Devious Maids”) noted “Whatever amount of success an actor achieves, he never does it alone.” And Katherine Lanasa (“Longmire”) said, “It just really makes a difference if you have someone that believes in you behind you. Some of the best jobs I’ve gotten, the people didn’t believe that they should see me and my agent talked them into it.” The theme that ran through the acceptance speeches was that of collaboration. Agents, managers, casting directors, and actors all agreed that collaboration is what makes their jobs possible.

Melinda Loewenstein
Prior to joining the Backstage team, Melinda worked for Baseline StudioSystem tracking TV development. When she's not working, she enjoys cuddling with her cats while obsessively watching every television show to ever air.
END_OF_DOCUMENT_TOKEN_TO_BE_REPLACED